We Party in Bukit Bintang and Welcome Christmas with Snow

It all started because it was Christmas, and last year we spent almost the whole day on a bumpy, dusty bus travelling from Phnom Penh in Cambodia to Ho Chi Minh City in Vietnam. We were exhausted by the time we actually arrived and we didn’t mark Christmas at all apart from having a carbonara on boxing day. So this year I was determined that we’d mark it in some way. 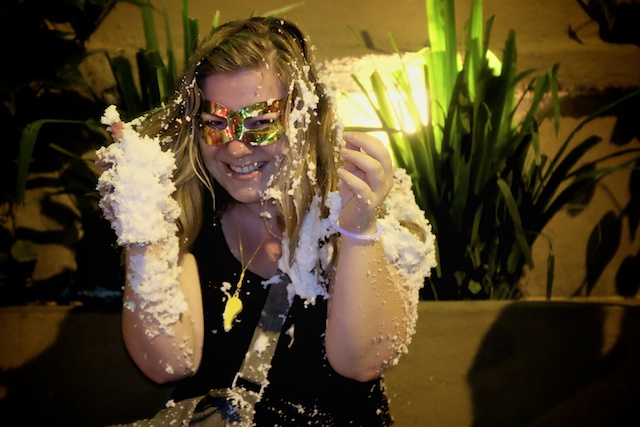 Read on to find out how this happened!

Before the night really got started we had something of our own Christmas miracle. Henry was watching the world go by from our window in Chinatown and thought he spotted some people we knew. We headed out to confirm the sighting and found Ayla and Robert at a street side restaurant just a few doors down from our hotel.  Well, thats no miracle, I hear you think, except we actually first met this lovely Dutch couple on our first night in Hue, Vietnam in March of last year! They were on holiday then and they had just arrived for a Christmas holiday in Malaysia that very afternoon! It is a small world indeed.  We had a drink with them and caught up a bit and then unfortunately they needed to head back to sleep – they had just come half way around the world! We decided to have another. 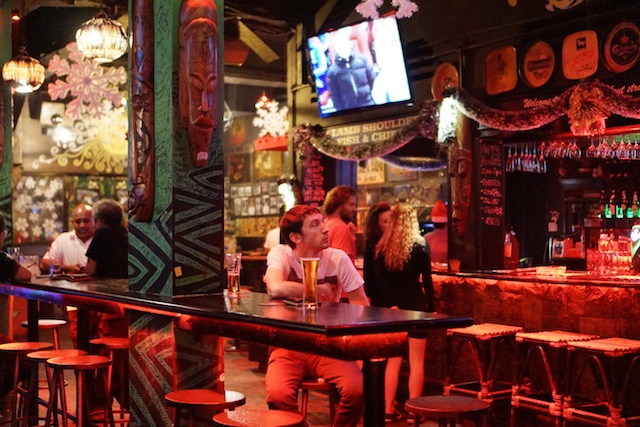 Inside the Reggae Bar

We started the evening proper in the Reggae Bar.  Now this is a bar with a guesthouse attached that I suppose most backpackers who’ve stayed in Chinatown have at least heard of.  It is one of the few places to have a drink here that is not primarily a restaurant or hotel and it has at least a few customers both inside and out all day, everyday.  We arrived pretty early and as there were no free outdoor tables we joined another (surprisingly Dutch) couple and had a few drinks and a chat with them. We were later joined by another reveller but none of them really wanted to properly party (they’d just flown in that afternoon too). The bar were trying to get things going and handed out a goody bag to every customer. We each got a party popper, whistle, mask and some other bits but it didn’t look like anyone there was going to be wearing masks and blowing whistles anytime soon so we decided to move on to where we’d read there would be some serious party action to welcome in Christmas. We flagged down a few taxis and eventually found one that would take us there for a semi reasonable price (they NEVER use the meter and this was the only one we’ve used on this visit because they are all rip-off merchants) and headed off to Changkat Bukit Bintang.  Half of the roads in the area were closed and we were dropped off just up the road from the busy street full of bars. 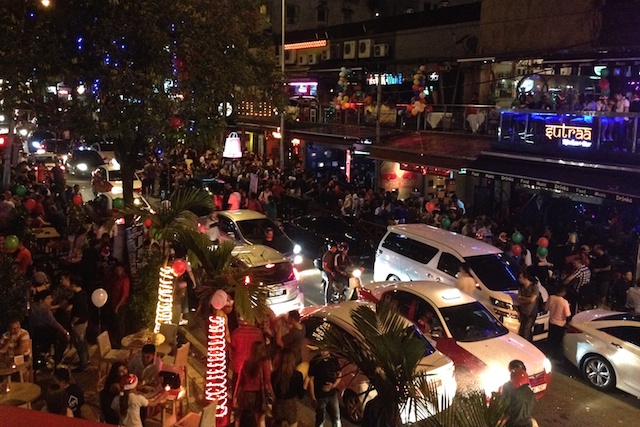 And so the “fun” began.  Not wanting to commit to a particular bar at the outset we took a tour up and down the crowded street, weaving past Malaysians and ferringhis (foreigners) who were drinking on the pavement tables. All the way up and down we were accosted by santa hat wearing staff trying to entice us into their establishment as the music at the highest volume changed every few meters. Not being used to this sort of carry on we were not sure which one to go into. Eventually we decided on an Irish place and were delighted to discover they sold Strongbow. We were not so happy with the price of said Strongbow (with tax and service charge it cost over £10 for 2 glasses!) We sat outside and drank our overpriced reminders of home and watched the world go by. The price of drinks only went up as the evening wore on. It seems we’d arrived after the early bird / happy hour offers and had to pay through the nose to get a bit tidily. We also had a few shots of Jaegermeister, they came in at about £8 for 2 in one place and £16 in another! After that we had beers from the corner shop at the much more reasonable price of just over £1.50 each. 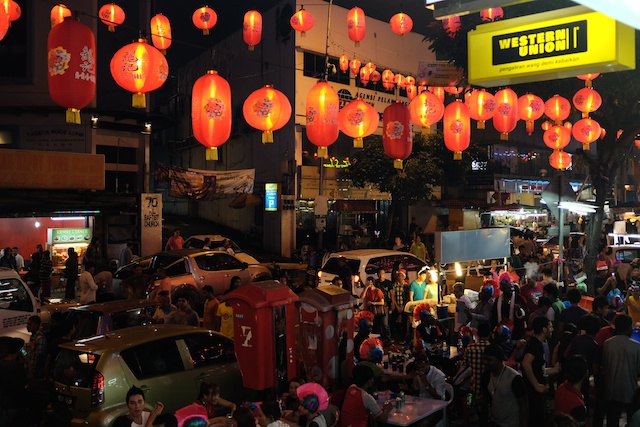 View from the corner convenience store where they had a band on the street, dancing and plenty of wigs!

The street of bars (Changkat Bukit Bintang) did not hold our attention all night.  We wandered away from the bars toward the area that during the day is full of shoppers. Emboldened by the booze we purchased some of the ubiquitous snow spray and got stuck in. The masks we’d been given earlier in the evening proved helpful in offering a little protection to our eyes from the constant onslaught of snow.  It seemed that if you didn’t have your own can of spray you were about 20% likely to be got. If you had your own can then it was open season and anyone and everyone with some spray could cover you as they pleased. We sprayed and were sprayed. My hair became a mess of wet, slightly sticky rats tails. Our cardboard masks became soggy and we became more and more aware of the lack of weather sealing (waterproofness) of our cameras. 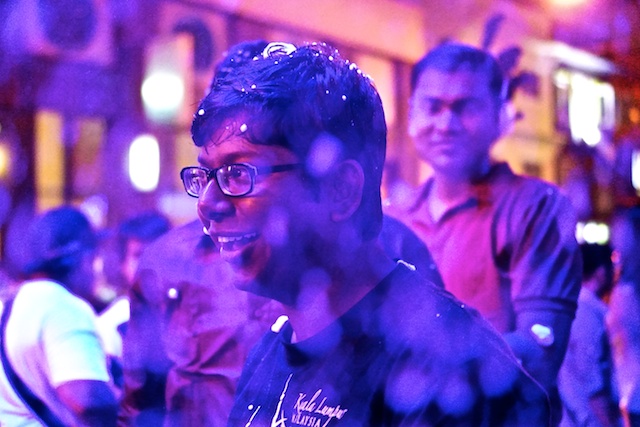 Eventually the Strongbow and Jaegermeisters did their work and we joined in properly. We sprayed people and tried to capture their reactions.  There were tough conditions for taking photos but we gave it a go: 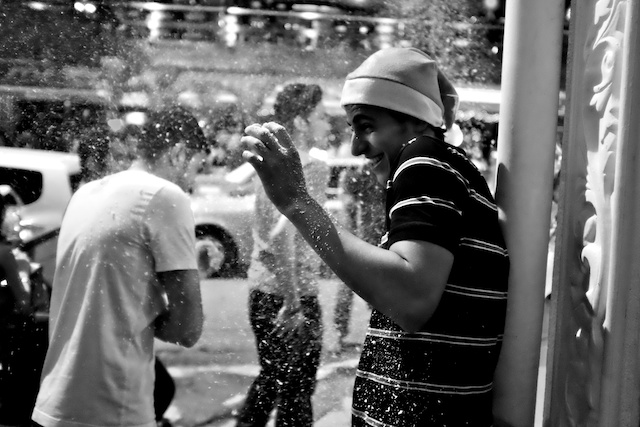 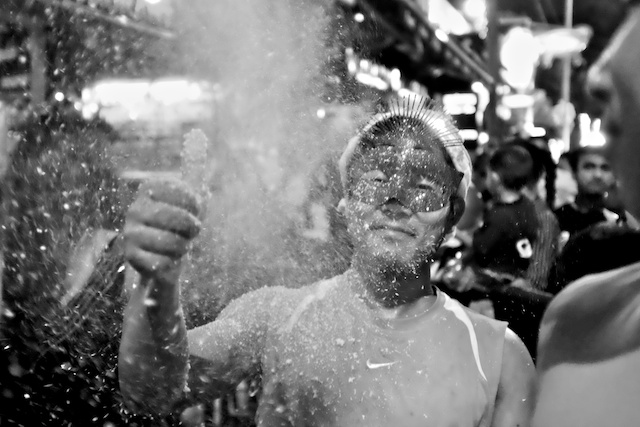 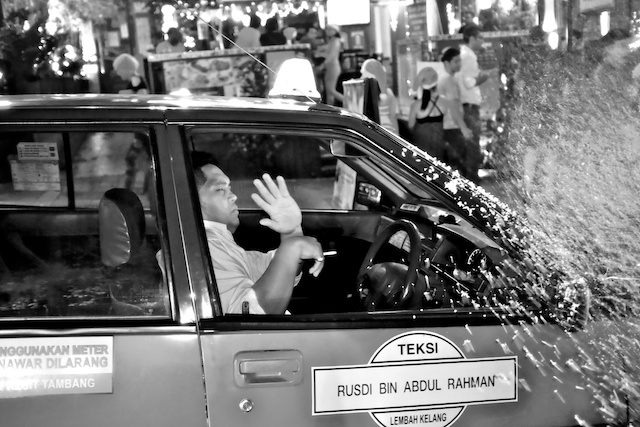 This was naughty, I know! 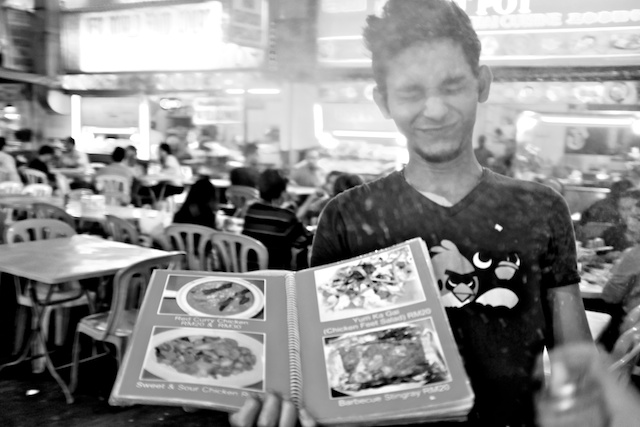 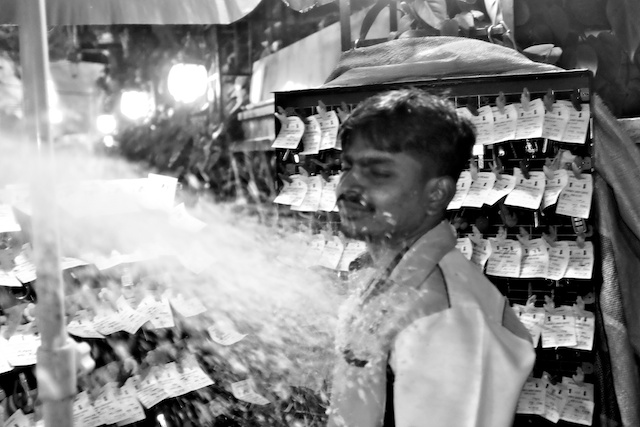 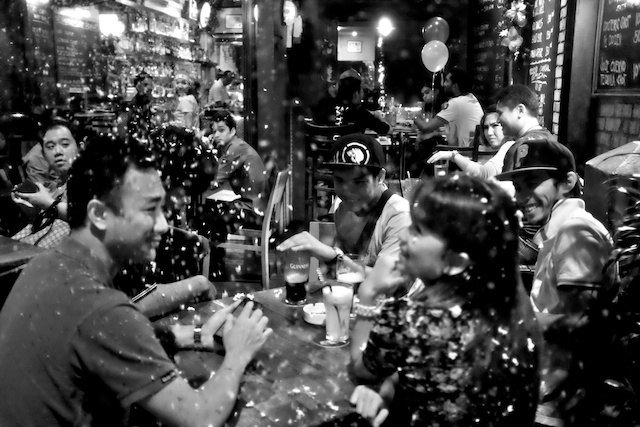 I also thought to take a little video of the madness. It was shot on Jalan Bukit Bintang near the junction with Changkat Bukit Bintang. The road was closed to traffic completely and the construction stuff you can see in the video is from where they are building a new MRT station.   It is of quite poor quality but it gives you an idea of what was going on…

The party looked to be continuing for a quite a while yet when we decided to head back. We’d finished many cans of spray and were ready for bed. We grabbed a delicious chicken kebab (there are a few high quality middle eastern food places in the area) and walked the few kilometres back to Chinatown. 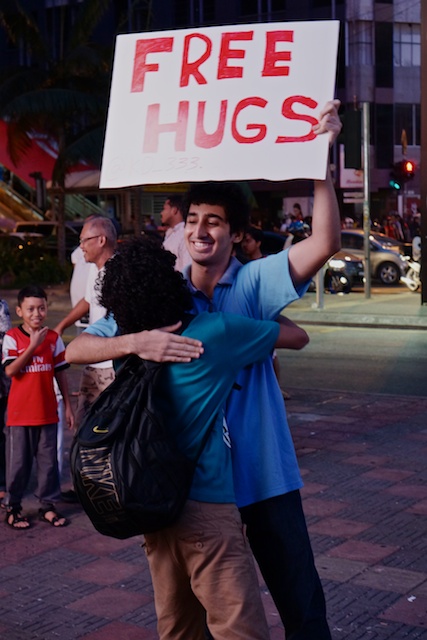 This young man was standing outside H&M (very central) and giving out free hugs. Not sure if it was anything to do with it being Christmas Day or not

Our Christmas Day understandably started a little late.  We’d read that the primary activity here on this public holiday was shopping and our research proved to be correct. The majority religion here is Islam (approx. 65%) while Christians make up just 9.2% of the population but it felt like all of Malaysia had decided to go shopping.  We had a late brunch from a mixed rice pick and mix here in Chinatown, wandered around the nearby Masjid Jamek area and popped into Mydin (a good value local department store which is a little like a massive Wilkos) which was full to bursting of customers and then caught the free bus to Bukit Bintang with the idea of taking some photos. 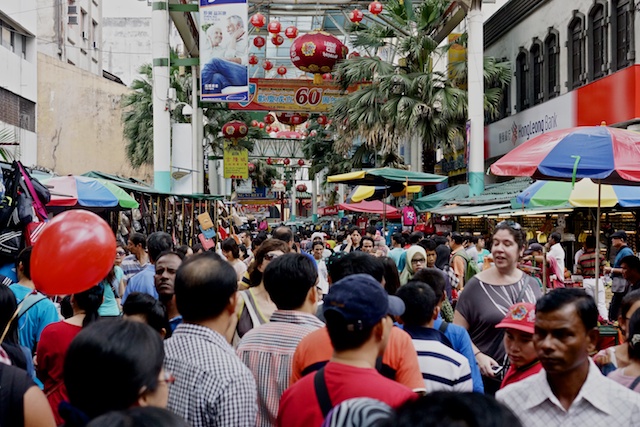 Chinatown was busy on Christmas Day 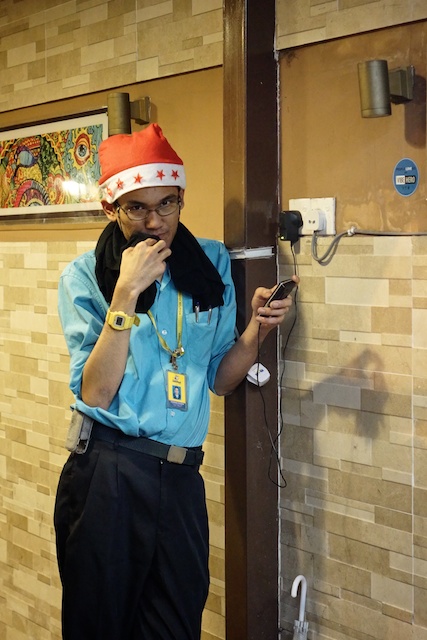 Well, it was all a bit much! We wandered around for a bit, found it all ridiculously busy (the year end sales had already started) and headed back to our room after only an hour or so. We treated ourselves to a pizza delivery from Domino’s and watched a film on the laptop in peace and quiet. Our Christmas fayre was topped off by a delicious bar of Green and Blacks chocolate which I’d judiciously kept in my bag since my visit back to the UK. 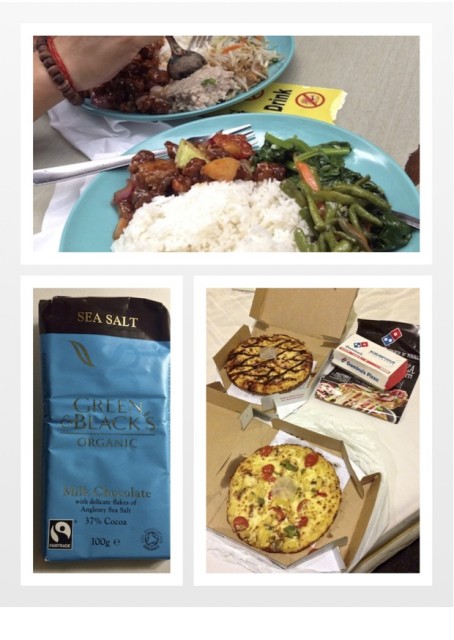 We didn’t do presents as such. Henry had replaced our stolen laptops a few weeks previously so I got him a token Christmas gift of a pair of underpants and a new toothbrush as a treat. How romantic eh?!

2 thoughts on “A Crazy Christmas Eve in Kuala Lumpur”