A few days in Kuala Lumpur

So, after weighing up spending 2 days and 2 nights on the train or flying for just a few hours and a few pounds more we decided to scrap the overland journey and fly to Kuala Lumpur instead. We scheduled just a few days there as we have some more time there later in the trip.

We landed at KLLCCT (Kuala Lumpur Low Cost Carrier Terminal) which is just over an hour away from the city cente by bus. The bus service was pretty good in that after the bulk of the journey we were transfered into a mini van and dropped off right outside the guesthouse. The ‘Tropical Guesthouse’ is located in Burkit Bintang, an area which comes to life at night. Our room was tiny. I would say it was smaller than our large tent with two small singles and a little space between them (mostly taken up with the door opening), one tiny table and one plug socket. We also had a blanket each but they were so small that you could not cover your toes and shoulders at the same time, and neither of us are particularly tall. There was a shared bathroom down the hall which was always empty and came with free shower gel (got to say the positives too!) 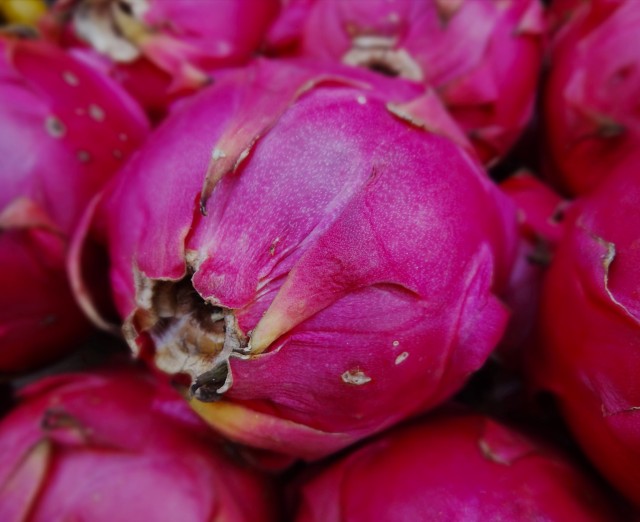 Our first impressions of Kuala Lumpur were favourable. We noticed the fact that the population was much more diverse than in Bangkok and everyone seems to get along pretty well. There are many different ethnicities here and it is actually against the law for different people to quarrel about religion etc! There are a great number of Muslims, with the strictest sense of dress for the females we have seen so far. Lots and lots of full burkas on the street. Islam is the official religion of the country but there are also a great number of Buddhists, Hindus and Catholics here too.

Our first job was to get me to a doctor. For the last few days in Bangkok I had a pain behind my left eye, which was worse when I moved it, which you really can’t help doing. It was bizarre and our initial Internet searches showed up nothing. By the time we left Bangkok it had started to go red and I felt unwell too – tired, fuzzy headed etc. As it was a Sunday there were few private options so we headed to Kulala Lumpur Genreral Hospital. I saw a doctor within about 20 minutes and he agreed that it may be something to do with my tooth (a long shot I had found online the night before.) He said it was probably an infection of the optic nerve steaming from the tooth (which was in no way painful.) He prescribed me anti-biotics, painkillers and anti swelling pills. I got all the medication and the consultation for the grand total of £3.

Owing to me being rather under the weather we did not do that much in KL. We did enjoy lots of street food including some broccoli on a stick which I was very pleased to see as vegetables are a bit of a rarity in Thai street food. There was a road very near our guesthouse which was one enormous outdoor food court, serving Malay, Indian, Thai, Chinese and Arabic food in abundance. We ate very well for those couple of days, always outside save the first night when we had some amazing hummus and falafel in a Lebanese restaurant as it was the closest at the onset of a downpour. 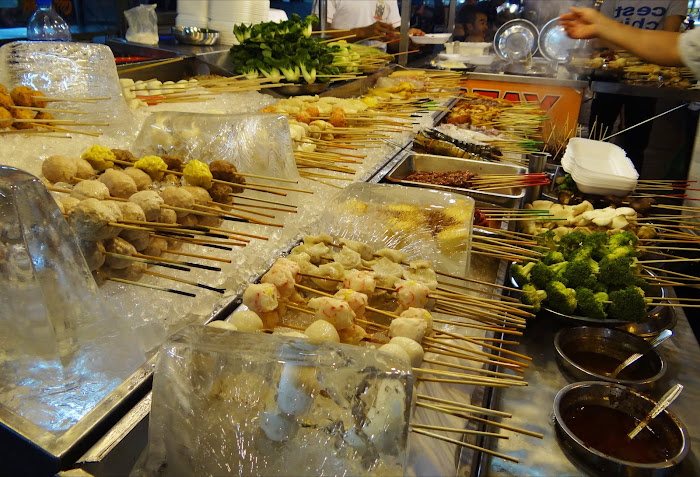 A satay stand – you chose some sticks and how they should be cooked, on the BBQ, deep fried or boiled; then slather in some delicious satay sauce!

We saw the twin towers and the KL tower from a distance but prebooking is required to actually go up for the view or to walk the bridge between the twin towers. They looked pretty impressive at night though, all lit up. 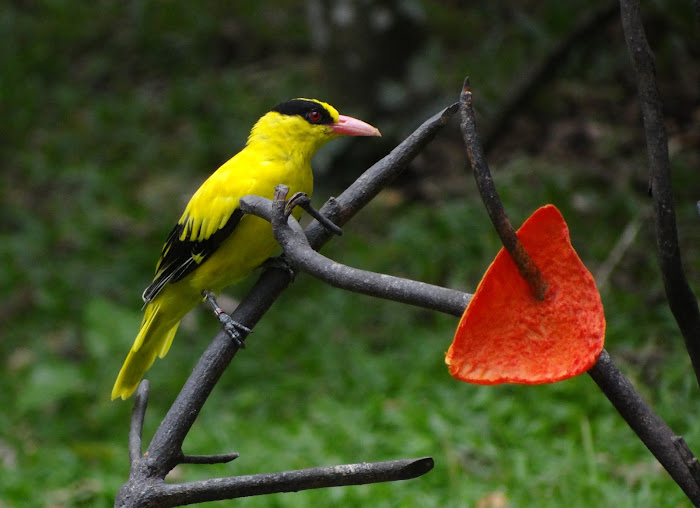 One afternoon we spent on a visit the KL Bird Park. It is apparently the “world’s largest free flight walk in aviary” but Henry still felt sorry for them being trapped in there. It really is enormous and we ended up spending the whole afternoon there. The birds were mostly very beautiful. Many of them were in 4 massive aviarys but some, like the eagles and the owls were trapped in quite a small cage, considering their size. The parrots were the most colourful and they had quite a large area. This couple were especially cute, feeding each other pieces of apple. 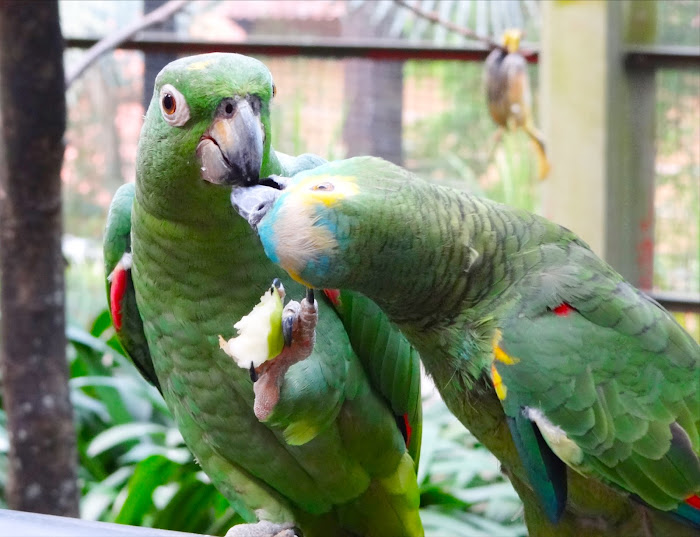 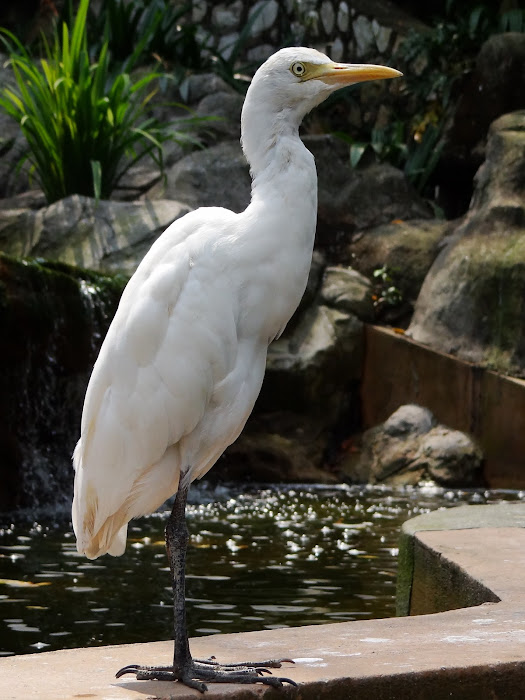 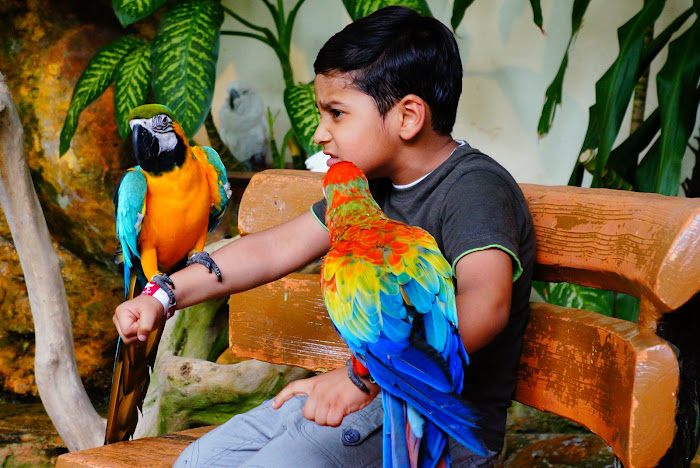 We took hundereds of photos between us, most of the birds were very obliging indeed. Except for one. There was this quite large bird in the last area we visited who must just have had enough of all the visitors for the day. Henry was taking a photo and all of a sudden his head went down, wings up and he went into attack mode! He chased Henry around, biting his bum and bag for a good few minutes until he evacuated the area. It was a sort of one way system though so I tried to distract it so he Henry could sneak past him up the path. I was then the next victim, I chose to use my bag as a sort of shield so I was not hurt but I am still no wiser as to what sort of strange noises might deter such an attack, I’m sure I tried all of them to no avail! We then ran away quickly to a safe distance to watch the next victims – a family with 3 children got the same treatment as us.

It was an expensive afternoon out, costing nearly £10 each for the entry fee, the drinks were not cheap there either. We have done very few of these sorts of activities though and it was certainly a memorable visit. It was also an easy place to be a bit ill: no traffic and uneven paving to deal with, plenty of shady places to take a break and lovely sights and sounds to entertain.

After looking at Trip Advisor we also decided to do the KL heritage walking tour – voted their number one “thing to do” in the city. We did not know quite what to expect but after getting over the fact we felt like we were on a school trip (as one of the kids) we quite enjoyed it. The tour is free and run by volunteers, here is a picture of our guide in full flow about the history of the city. We learnt a lot about the history of the city, the British influence, the Japanese bombings in the war, the buildings, the declaration of freedom, the flooding etc and saw a few remaining old buildings and the city museum. We walked for about 2 hours and ended with some much needed air con in the museum. We also got some free ginseng tea in a shop we visited. 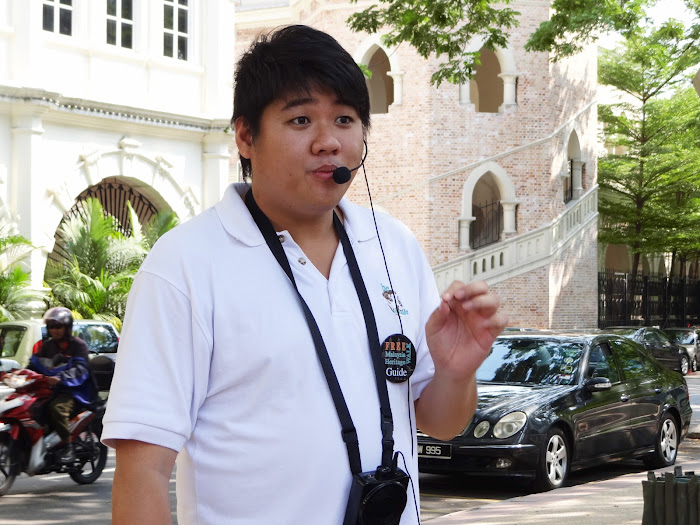 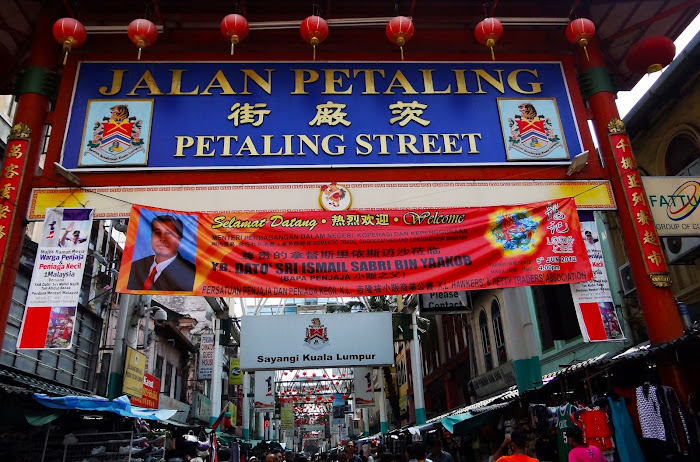 We took in the sights and sounds of Chinatown which is apparently bigger than the Bangkok one but seemed less genuine to us. There were many more fake goods and far less of the traditional items for sale in the market area. We had our first taste of red bean there though, in a sort of doughnut – delicious! 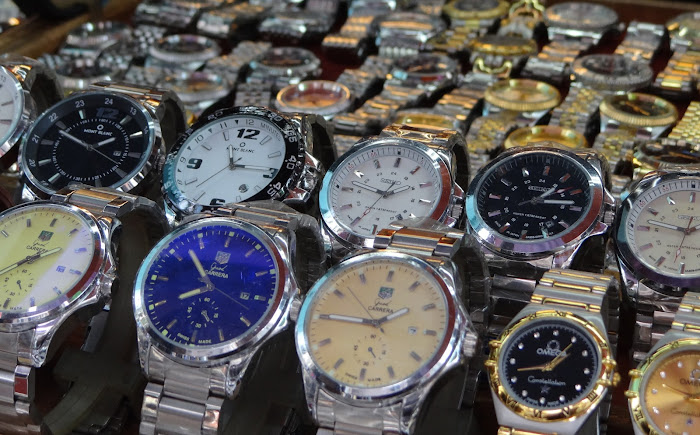 We were in two minds about paying for a room for our last night as our flight was so early. In the end we plumped for paying that little bit extra for a bed for a few hours. Remembering how we felt on arrival in Bangkok after a sleepless night at Mumbai airport on top of me not being 100% saw us going to bed at about 9.30 then getting a pre-booked taxi to the airport at 3.30 am. It was the right choice and we felt awake enough at the aiport to feel smug about our little bags all over again.

Just after 6am we took off for the Philippines and another chapter of our adventure began….