A Unique NYE at the Turun Rally in Kuala Lumpur

We Welcome 2014 with Protesters at Dataran Merdeka

As you may have read in my last post we had a rather party orientated Christmas Eve. We didn’t take many photos, we spent a lot of money on alcohol and although it was memorable we decided to take part in a rather different sort of gathering for New Year’s Eve. We attended the biggest rally we’ve ever been to and welcomed 2014 with between 30,000 and 50,000 others. 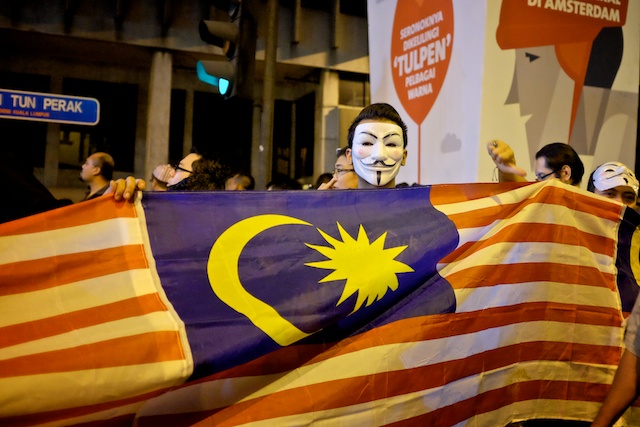 As far as we could tell from asking around and online research there are three main options for what to do on a New Year’s Eve in Kuala Lumpur. (This is a budget conscious list, there are always events in posh hotels and bars you can get tickets for if you want to spend the money.)

We’d been following the news about the protest for a few days prior and up until the day itself it had still not obtained permission from the police to go ahead.  It was planned to go ahead anyway and did eventually receive clearance on the day.  The protests were about the rising costs of living and four non – governmental organisations had planned it together.  We charged our cameras and set off to see what we could find. 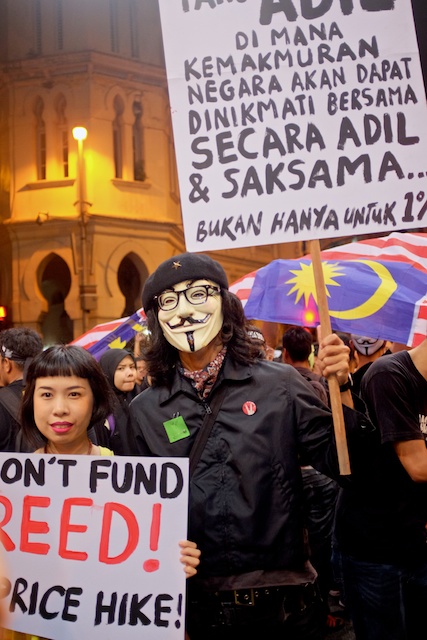 We arrived quite early on in the evening and the square was still pretty much deserted.  We hung around and took photos of the prettily lit Sultan Abdul Samad Building until no less than 13 busses arrived full of various types of police.  I spoke to one of them and he told me they’d been bussed in from outside of the city and that there was more than 1,000 on duty that evening. 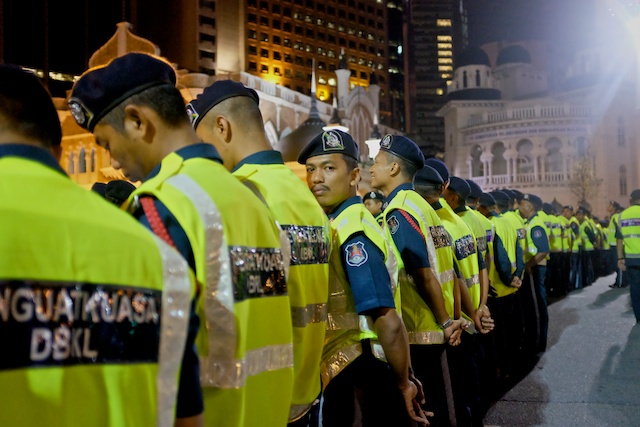 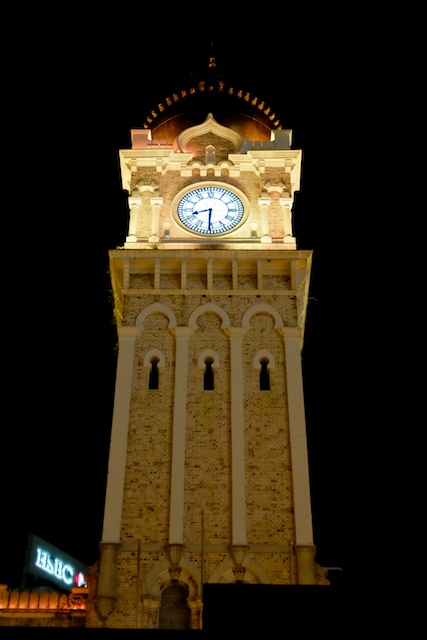 One the day when the time actually mattered the clock was actually five minutes out!

The closest meeting point was Central Market.  We headed there but there did not seem to be too much going on.  We met and spoke to a few of the protesters and got this photo but it was a pretty sedate affair so we moved onto the next point. 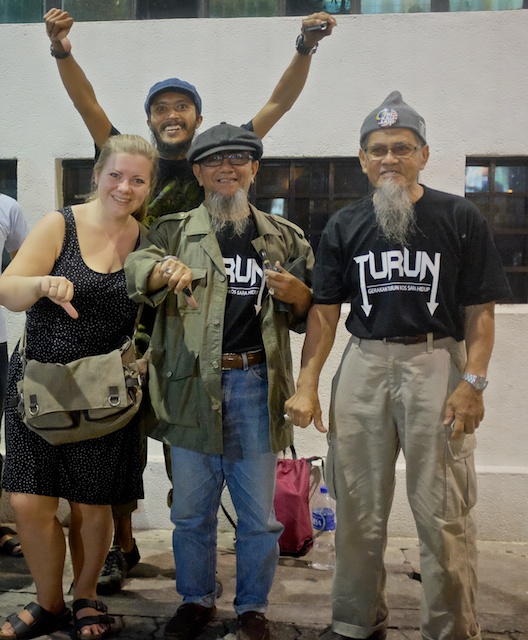 The thumbs down was the sign for support of lowering prices

The second meeting point was not too far away, outside the LRT station at Masjid Jamek.  The atmosphere here was quite different. There were at least a hundred or so gathered there at that stage and they were having a good old sing song.  We were handed the words but none of it was in English so we took photos instead.  (I also shot some video at this point which you can see later in the post.) 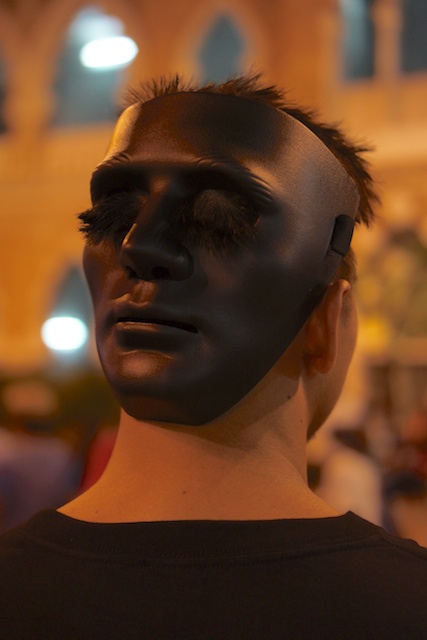 Around this area there were also a lot of sellers selling horns, masks, wigs, food and drink and there were loads of people heading towards the square who were not part of the rally, just there to enjoy the show. 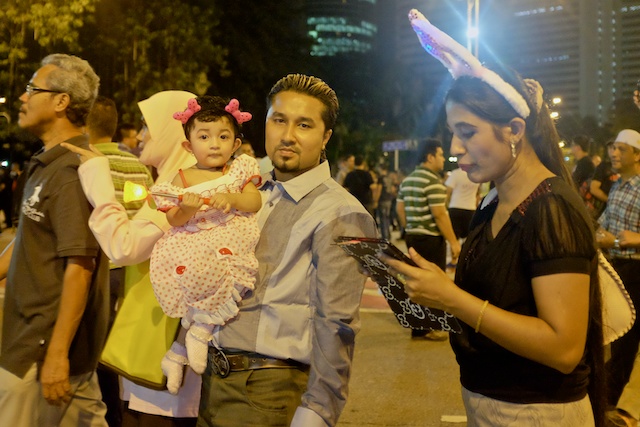 We made our way back down to the main square, the crowds getting thicker every minute. (You can see what the place looks like in the daytime by checking out my post here about the historic tour we joined a few weeks ago.) There were hundreds of police officers lined up ready to stop protesters entering the area, sometimes 3 or 4 lines thick. 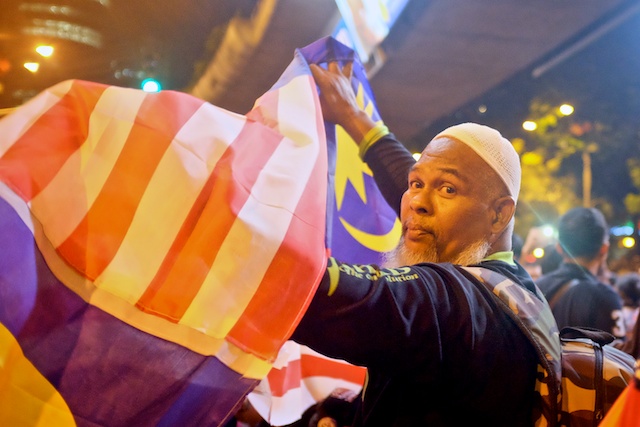 We later learnt that the lines held for a couple of hours but were then breached and the thousands of protestors who were by then in the area surged into the square.  There still seemed to be quite a long time to go at this point.  The ‘concert’ was disappointing.  Music would play for perhaps five minutes before the stage went quiet again and the big screens were blank.  Not a very well organised show. We hung around and took photos waiting for midnight. 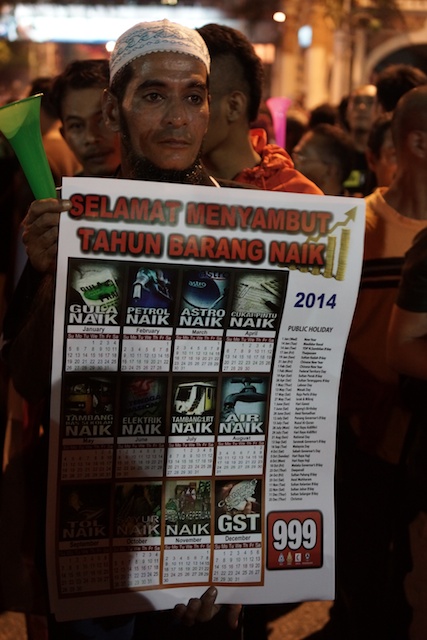 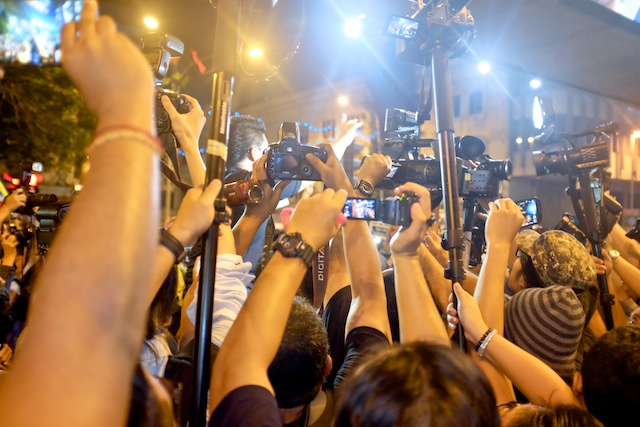 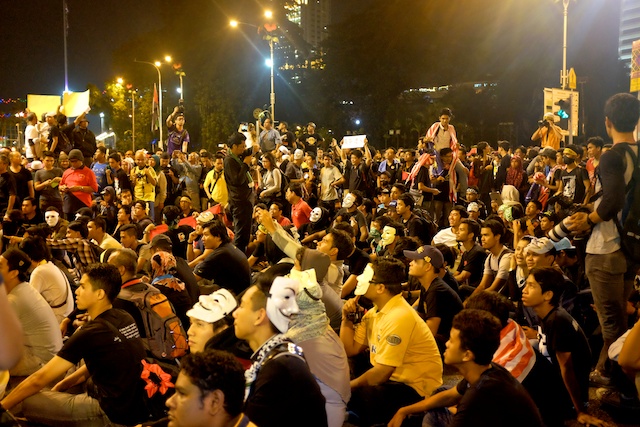 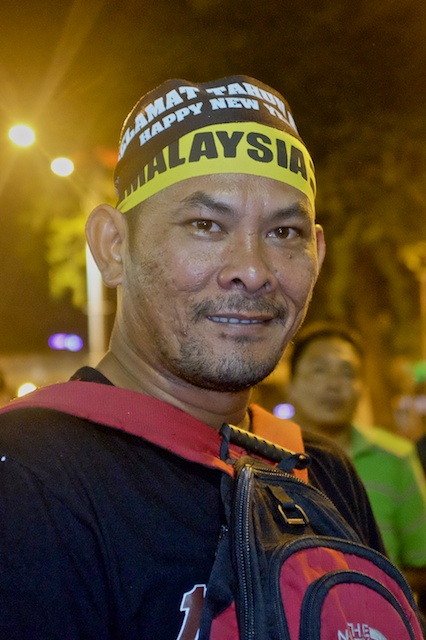 At about half 11 we’d moved out of the main area to have a little sit down and a drink and noticed that large numbers of people were leaving.  We were puzzled and tried to ask a few people what was going on.  Unusually, the people we asked did not have enough English to explain it to us so we headed back into the throng to find out what was going on.  There was a speech coming over the PA and many of the protesters (identifiable by their black t-shirts) were booing loudly. We later learnt that this was the mayor of KL and his speech was not at all well received.   After the speech was over that was it, officially speaking. The stage went dark, the screens and the lights around the square were all turned off and we gathered that the fireworks had also been cancelled. It appears that a couple of plastic water bottles had found their way onto the stage (despite the enormous police presence!) and that was used as an excuse to cancel the show. The non-protesting folks were obviously a bit put out. I think the protesters saw it as a victory. 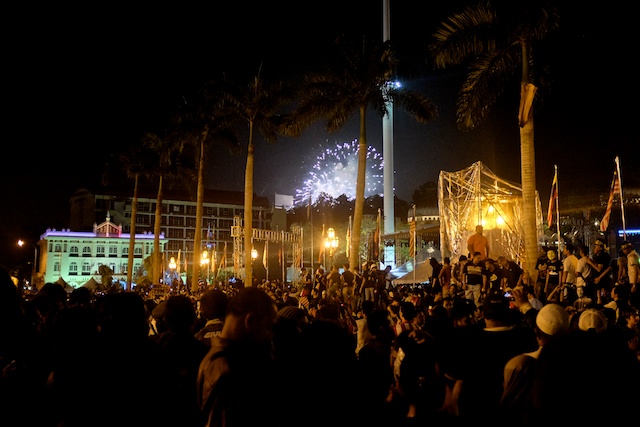 The sky lit up in the distance at midnight with what we assume were the fireworks at KLCC. There were no fireworks for us. No countdown, no Auld Lang Syne. 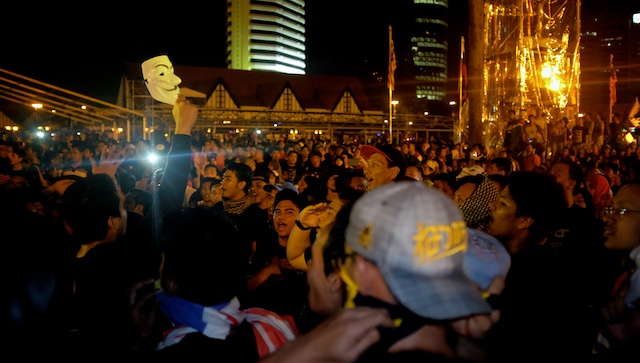 A swell of singing erupted and we stayed in the middle of the crowd for a few minutes, taking photos and filming. Here is the little video I made:

That was it! The popular estimates of the number of people in attendance range from 30,000 – 50,000 people, although I have seen some reports claiming up to 80,000 people were present! There were no arrests, nobody got trampled to death and everyone went home peacefully at about 1am; for the numbers I think that is quite impressive.  I think it really helps that we didn’t see anyone at all with an alcoholic drink in their hand. A few of the drinks sellers had small cans of beer among their water and fizzy drinks but we didn’t see anyone drinking them and we didn’t see anyone drunk. 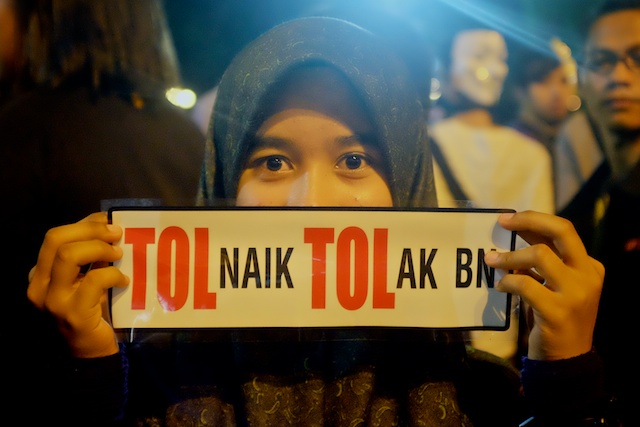 The cost of the evening? Less than £1 between us for bottles of water and a Fanta, 40p for some unidentifiable meat on sticks for Henry and 30p for a freshly cooked doughnut for me. What a cheap night out! 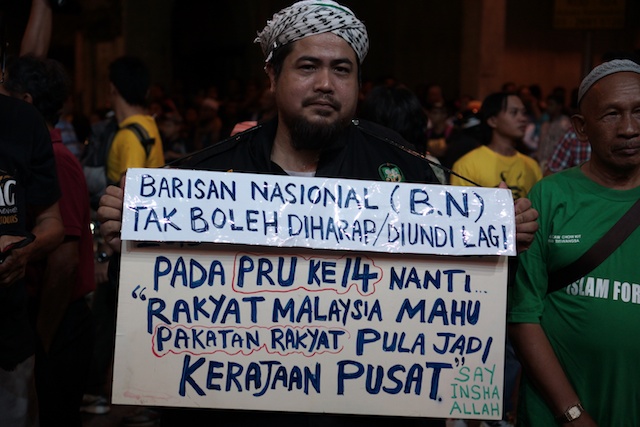