Backdated blogging… Kuala Lumpur on our last visit and Melaka

Some of you may have been wondering about whether we have made the effort to see some of the most famous sights in Kuala Lumpur since we have been here so long now. The answer is yes, but not this time. 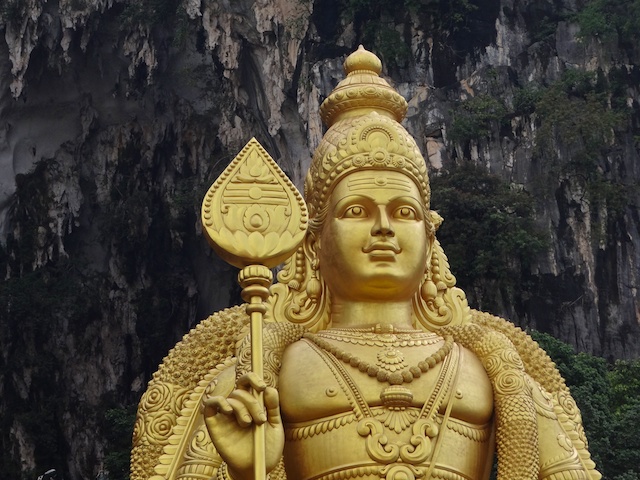 I am rewinding back before this visit, before my trip home to the UK, before Bali, before Singapore to our second visit to Malaysia. This was after our earlier than expected return from the Philippines.  I have already covered our first few weeks here when we went to Ipoh, Taiping and Georgetown, Penang. After Ipoh we thought we had better check out the capital city properly. We had only spent a couple of days here on our first visit and I was poorly with a tooth / optic nerve infection so we saw very little then.

Upon returning we tried to be good little tourists and ticked off many of the tourism sights. I think by far the best visit was the one to Batu Caves. Located in the north of the city but just a 20p train ride away; it is one of the most important Hindu shrines outside of India.

We arrived bright and early which was good for the heat but not so hot for the photographs. The first and most colourful sight was this enormous statue of Lord Hanuman, the monkey god. 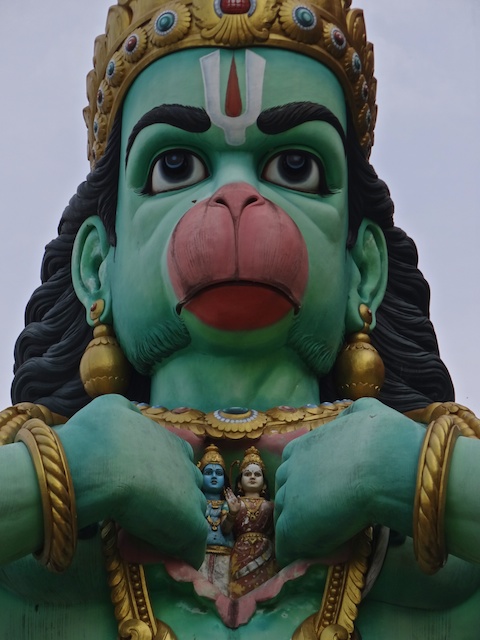 You can’t really tell how large it is from this picture but it stood taller than the average house.

After admiring this for a while we went around the corner and were greeted with a much bigger statue. The golden statue of Murugan is the tallest in the world (42.7m). Wikipedia tells me it “is made of 1550 cubic metres of concrete, 250 tonnes of steel bars and 300 litres of gold paint brought in from neighbouring Thailand.” Wow. It is certainly very impressive: 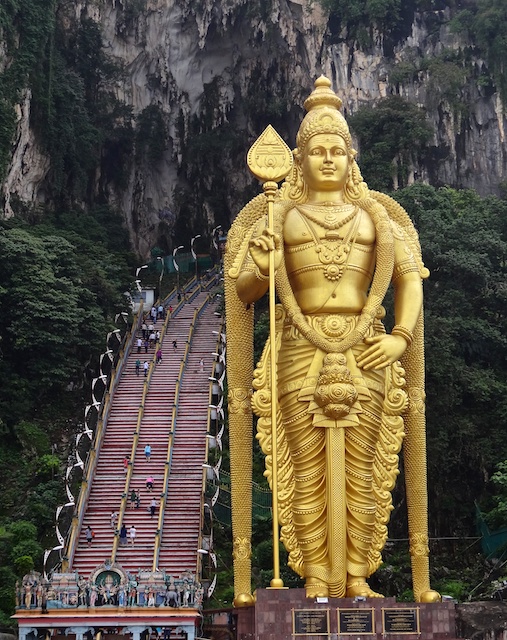 As you can see there are quite a number of steps up to the entrance to the cave. There was a good view over the city from the top but as we rested from the climb and took in the view we were rather distracted by a man who decided he just could not make it back down to the public toilets at the bottom. He climbed over the barrier, removed his trousers and pants, did his business right there in full view of everyone and then used his pants to wipe himself and discarded them into the bushes. All this time his poor wife was waiting for him on the steps. Sort of spoilt the view a little.

The cave itself was enormous as well. We had started spotting monkeys almost as soon as we left the train station but by the time we reached the mouth of the cave they were everywhere. I think this is where our little obsession with taking photos of monkeys started. You have already seen some of the many pictures we later took in Bali because we could get so close and here it was the same. The macaque monkeys were there to get food from the visitors and also to steal the fruit and flowers left as offerings by the temples inside the cave. 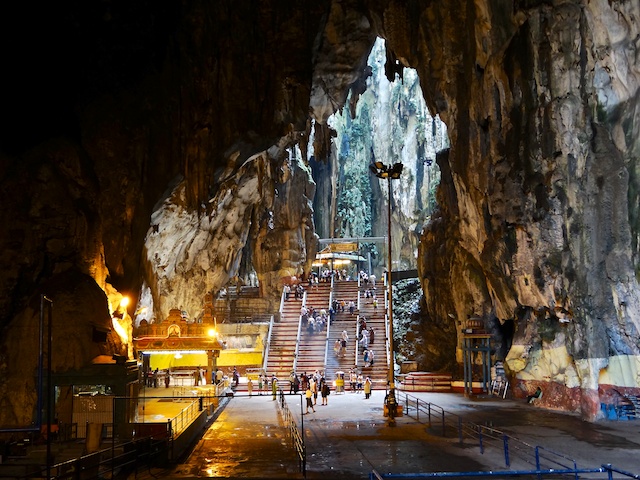 There were several temples inside where devotees were recieving blessings from the priest. Between blessings the priests would come out and chase away the monkeys with a big stick. 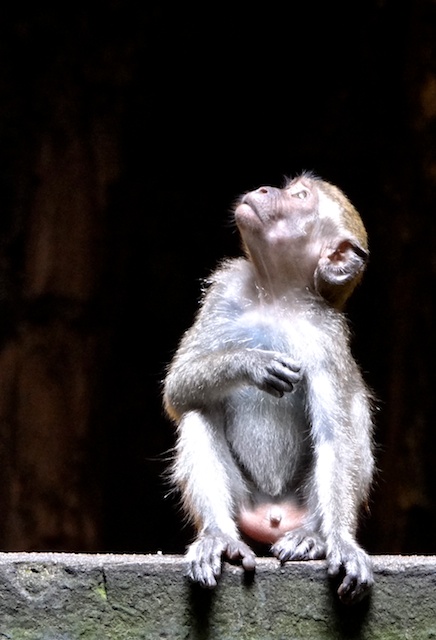 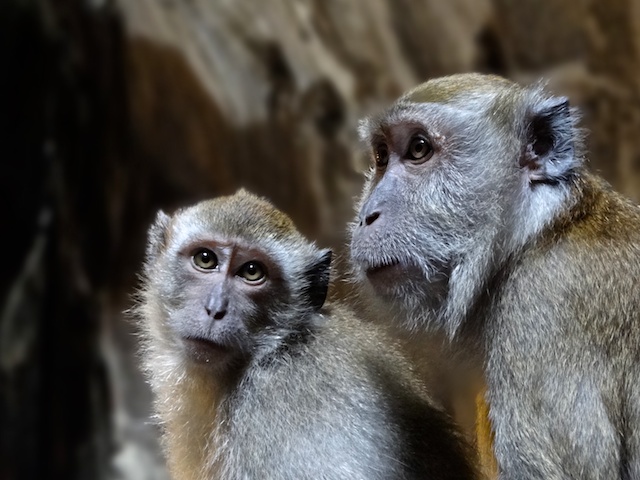 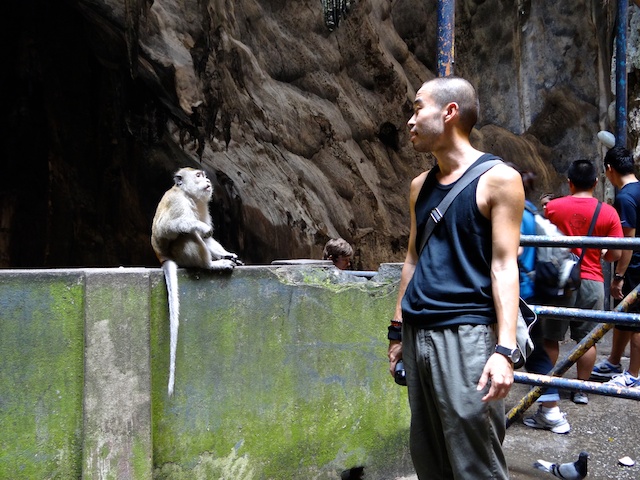 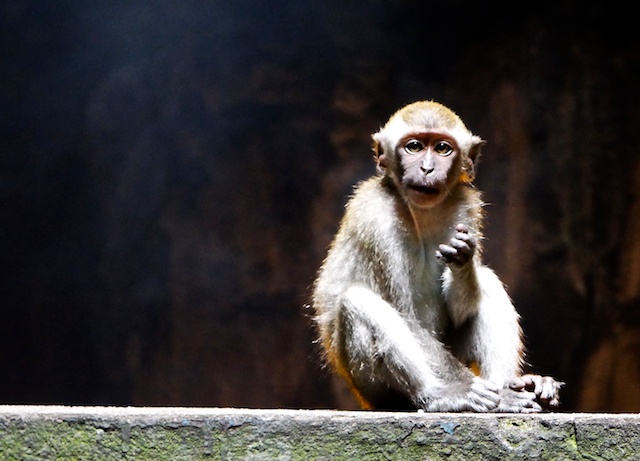 I love this last one because of the natural light from above and the smoke from the incense in the background. As we got right to the innermost point of the cave the vaulted ceiling disappeared to let the natural light stream in and reveal the limestone walls which have been forming for millions of years. It was pretty nice. 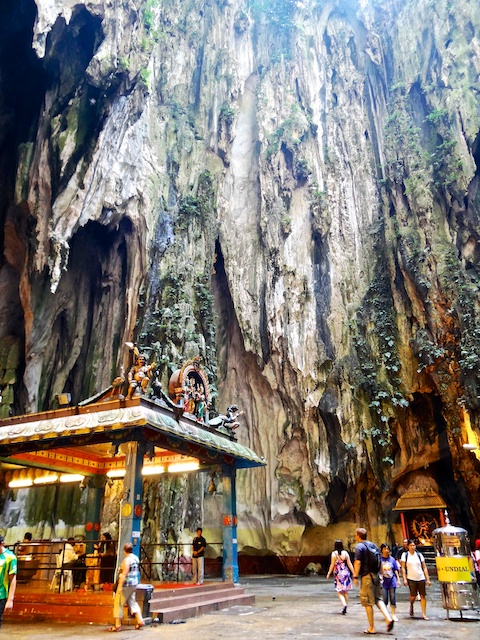 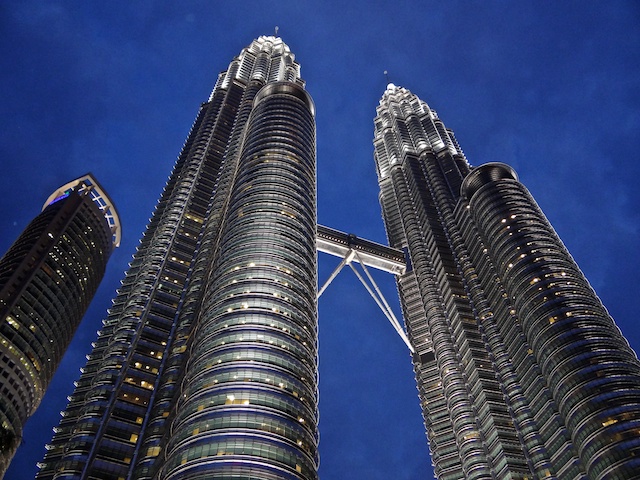 The most iconic sight we visited was the Petronas twin towers at KLCC.  We arrived late afternoon and stayed until it was dark. It was impossible to resist trying to fit them into the tiny rectangle of the viewfinder. 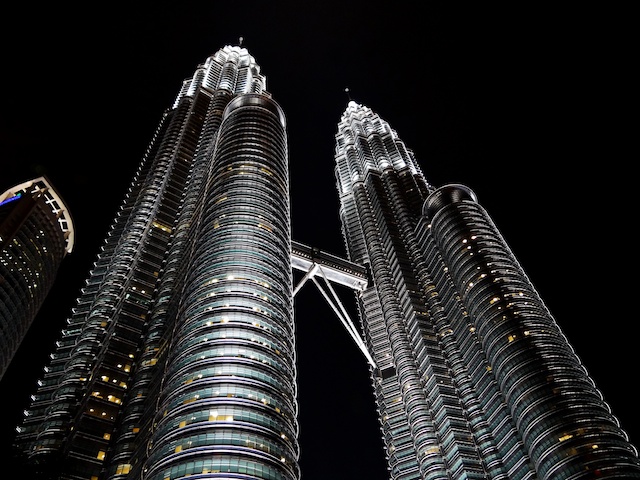 We got to the Petronas towers with our “Hop On, Hop Off” bus tickets. With a limited amount of time to see the city the proposal seemed sound – 24 hours of unlimited travel with 23 stops throughout the city. The leaflet claimed that there would be a bus every 15 – 20 minutes from 8am – 8pm. The leaflet lied.

The traffic in Kuala Lumpur is possibly the worst we have come across so far. The drivers may not have quite the same death wish as in Mumbai but it is just as busy and compared to say Bangkok, the vehicles are much older and the pollution levels much higher.  Bus is not the best way to get around. In the end we squeezed quite a few visits from our (rather expensive) tickets but many of them ended up being a bit of a let down…

We went to the National Mosque (Masjid Negara) and timed it so that we would not arrive during prayer times when non-muslims are not allowed in (following the advice on the leaflet) but were not allowed in anyway due to restricted visiting times (not detailed on the leaflet). We also went to the Deer Park and could not get in due to the 3 hour lunch time closure that was also not detailed on the leaflet. From there we walked to the Orchid Gardens which was not originally on our list. I enjoyed it but Henry was not amused really that all that was there to see was “just a load of flowers”. We left when the rains came. 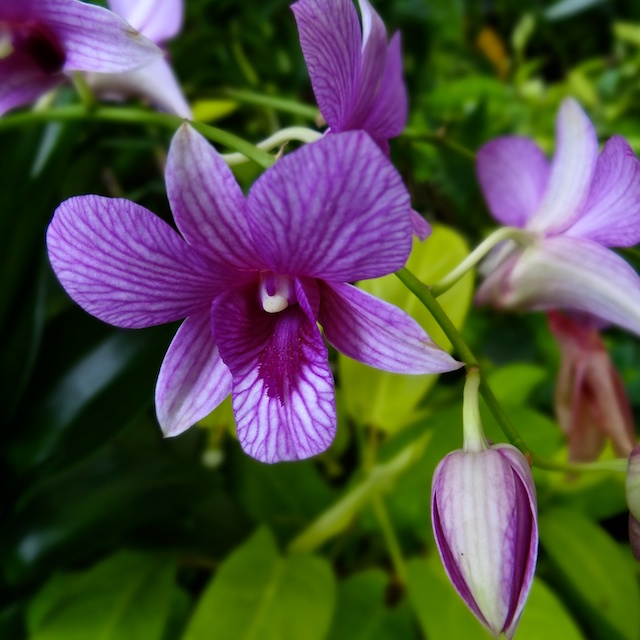 The next morning we decided to use the last few hours of the tickets to go to the Butterfly Gardens. Arriving there it started to rain and the staff told us we could not go in because  the butterflies “sleep” when it rains. We had quite a long wait for the downpour to clear before we walked back to the bus stop to get back to Chinatown before the ticket ran out.

To anyone considering a trip on the “Hop On, Hop Off” bus trip – don’t bother. It is far cheaper to get the LRT, Monorail or normal bus or use just walk to see most of the sights here in Kuala Lumpur. The only good thing about the experience was that one of the busses has an open top so you can take photos like this from the roof: 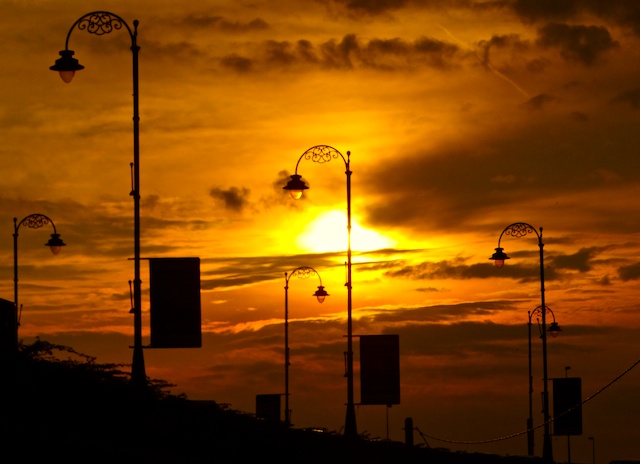 As we were in the capital city we decided to check out the zoo. We caught a normal bus this time which was very cheap but very slow. After over an hour on the road to the outskirts of the city I woke Henry up and we explored what was quite a large and busy zoo. 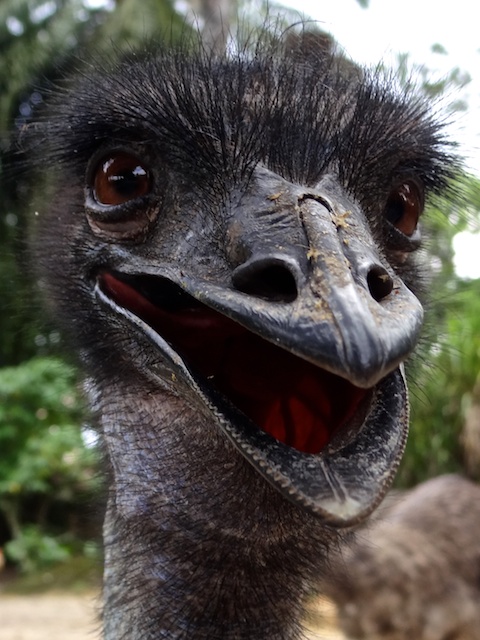 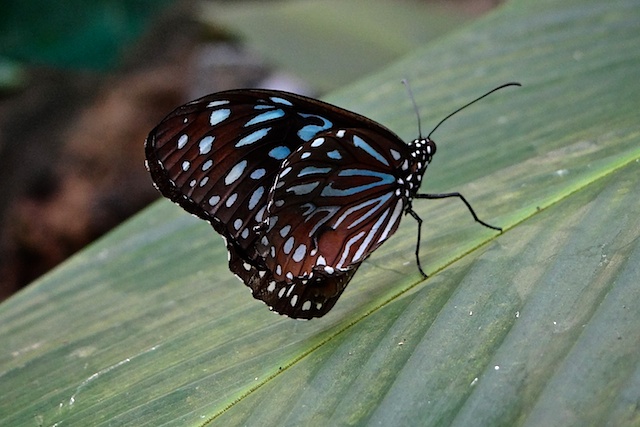 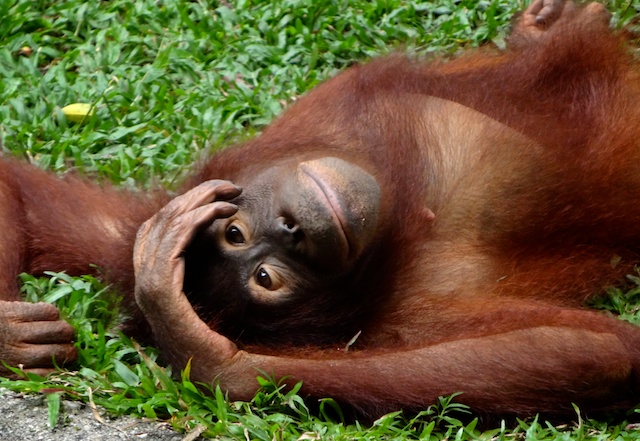 It was quite a good day out. The animals seemed happier than in Taiping zoo and most of them had more room. I would say to try and visit on a weekday though as it was pretty busy when we visited at the weekend.

From our explorations on foot we came across some brilliant graffiti by a bridge near Chinatown: 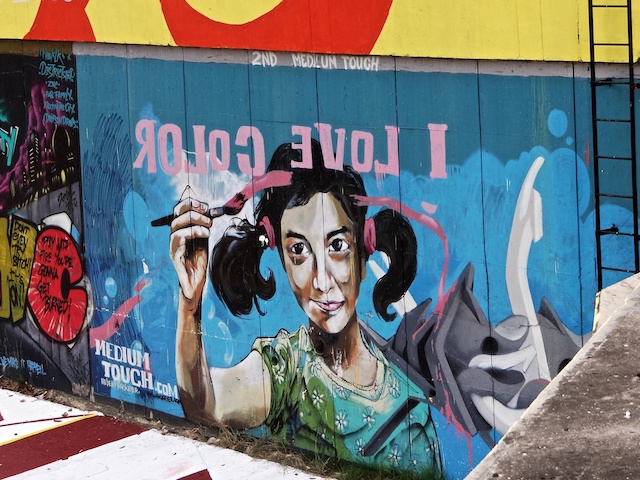 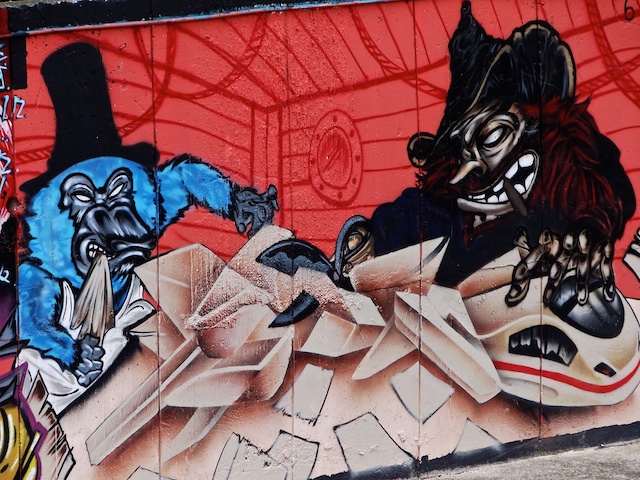 We also discovered a very cheap way to eat. The city is filled with eateries where you are served warm rice and then help yourself to as much meat, fish, vegetables and egg dishes as you like. The total is then totted up and you pay and then sit down to eat or takeaway. The Malaysians call these stalls and restaurants as “Mamak” as they are run by Tamil Muslims but we call them “pick and mix” and started to eat at these places regularly on this visit to KL. On our current visit we usually have at least one pick and mix meal everyday. This one below is sweet and sour chicken, bean sprouts and pak choi and cost a whole £1. 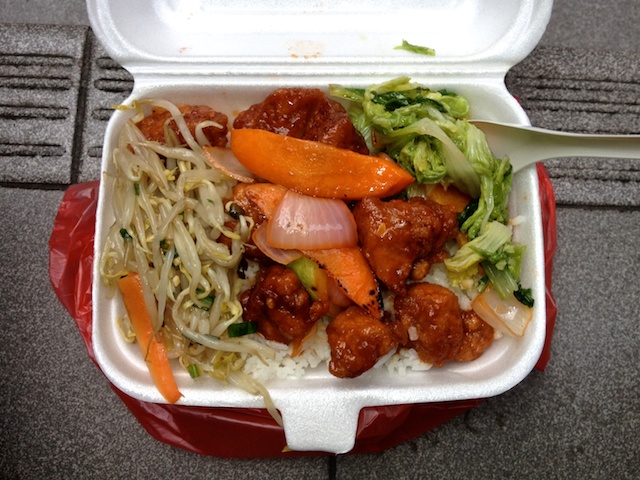 After our time in Kuala Lumpur we headed south as we still had a week or so before our flight to Bali.

Melaka is a UNESCO World Heritage site and it only took a few hours on a luxurious coach   to get there. Upon arrival we sought out the cheapest room we could find which was in a guesthouse with a shared bathroom. The shared bathroom part was fine really and we could cope with the lack of a/c as there was a good breeze from the sea but the annoying thing about the room was that the fan was a desk fan, not ceiling mounted and having it on meant that it was using the only power socket in the room. At that time we still had our multi plug adapter but that was no good for our cameras (purchased in India and Thailand) or my phone (also bought in Thailand.) Plug juggling is a drawback to budget travel.

The interesting, old part of Melaca is not very big so we did all of our exploring on foot. We came across many of these bicycle rickshaws all decorated but they all wanted a very steep price for their services. 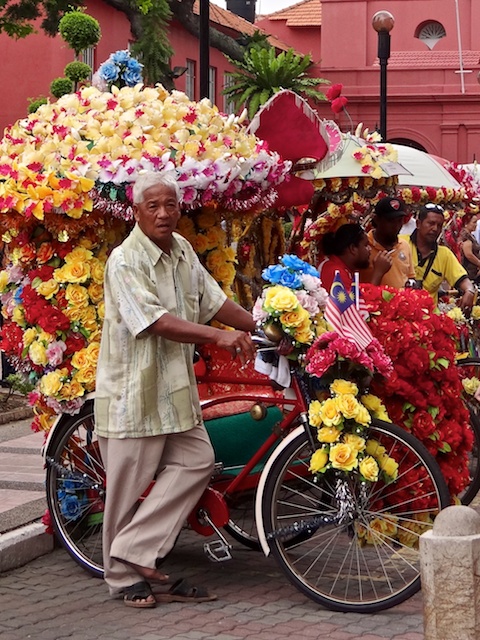 Some of them had quite bizarre decorations: 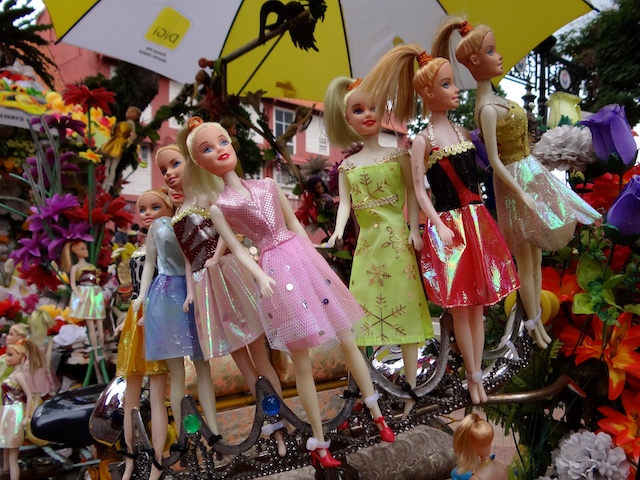 We only spent a few days there but the bit I’ll remember the most was the way all the houses along the river were decorated so brightly. It was a pleasure to walk along the newly built, smooth pathway and admire all the art; far better than looking at the items in the museums. 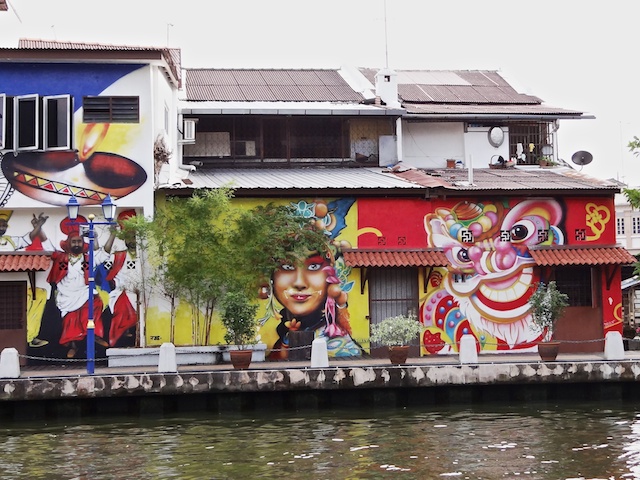 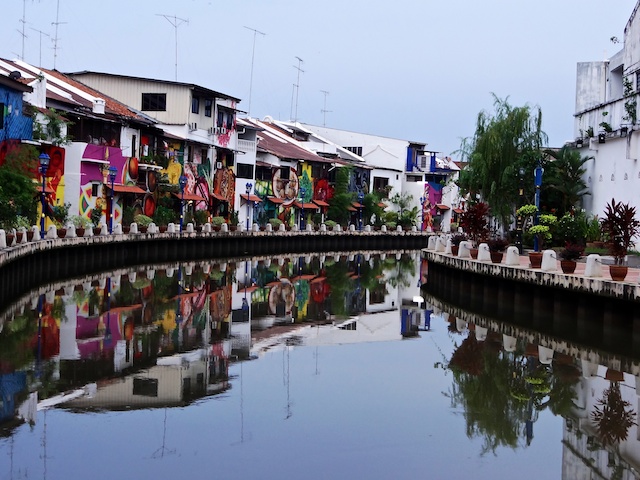 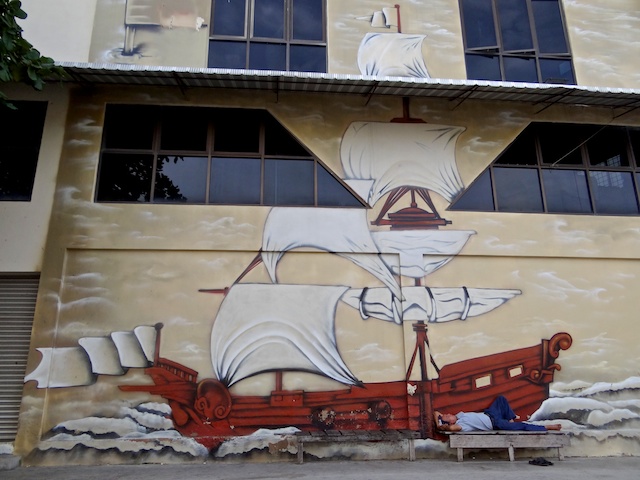 There were plenty of traditional stalls around and it seemed perhaps more pork than we’ve seen elsewhere in Malaysia, 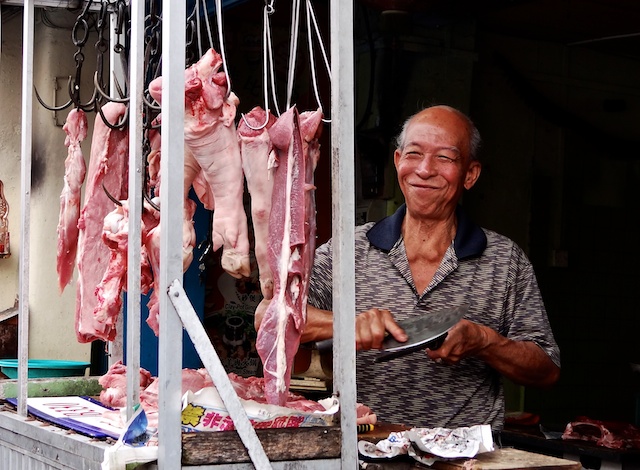 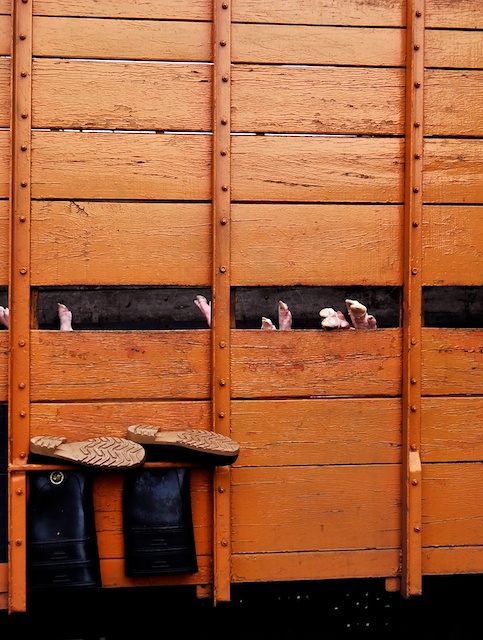 The enduring image I bet many visitors to Melaka take away with them is this very big ship which is on land, next to the harbour. 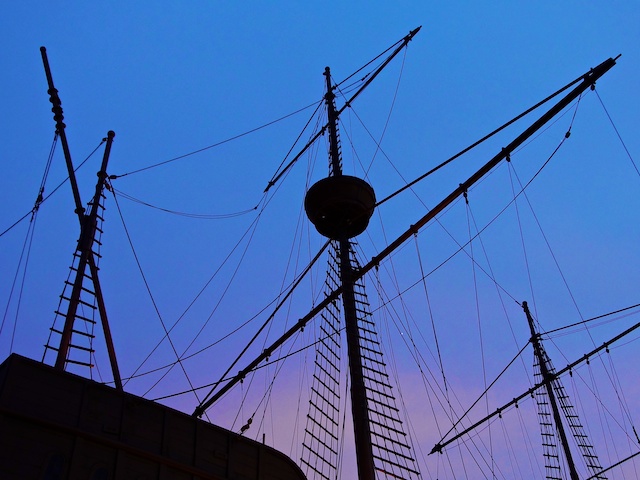 After a few days wandering around and taking it all in we headed back up north towards Kuala Lumpur and our flight to Bali.

We stopped off at a small place called Port Dickson on the way which was right on the coast. There we had our first experience of a dry thunderstorm (thunder and lightning but no rain) and a beautiful sunset. 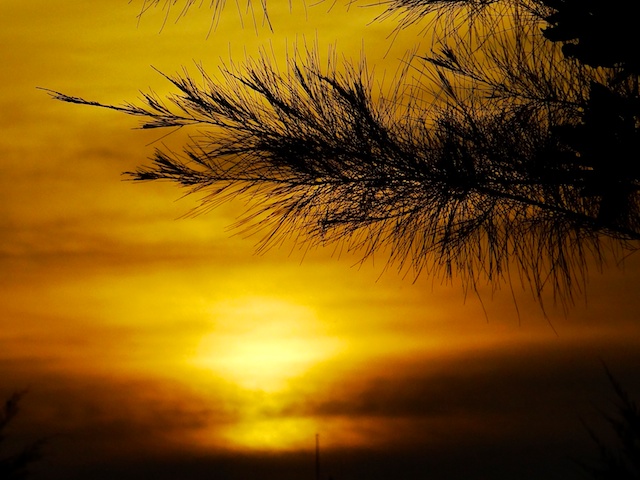