After the relative desertion of Da Nang our next stop was far more busy. Hoi An is a major tourist destination. It is the ‘must see’ place in the central region with a reputation for being ‘magical’. It is certainly much more pretty than Da Nang. 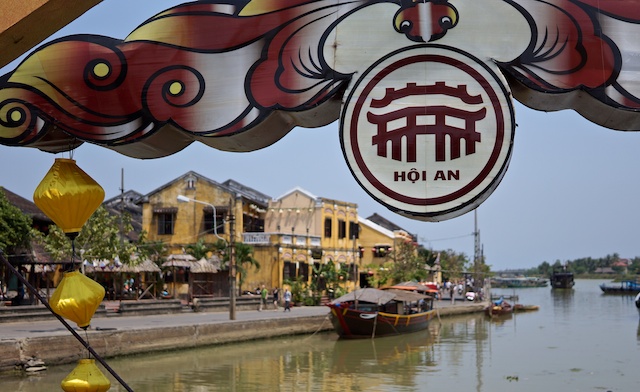 Part of the old town

Hoi An has been an important trading port for thousands of years and is one of the best preserved south-east Asian ports on the continent. The name romantically translates to mean ‘peaceful meeting place’.   The town dates back as far as the 1st century when it had the largest harbour in Asia. 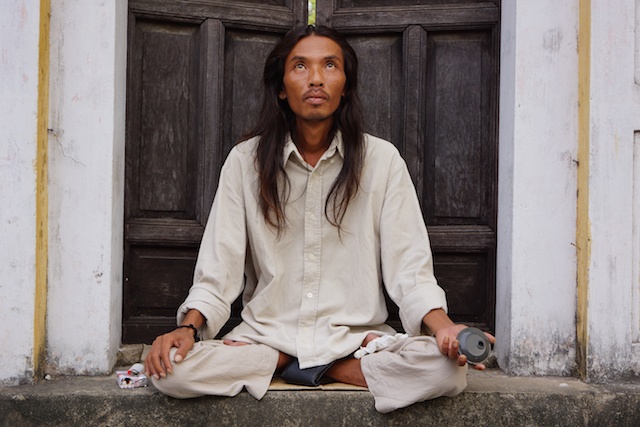 One of Henry’s great photos 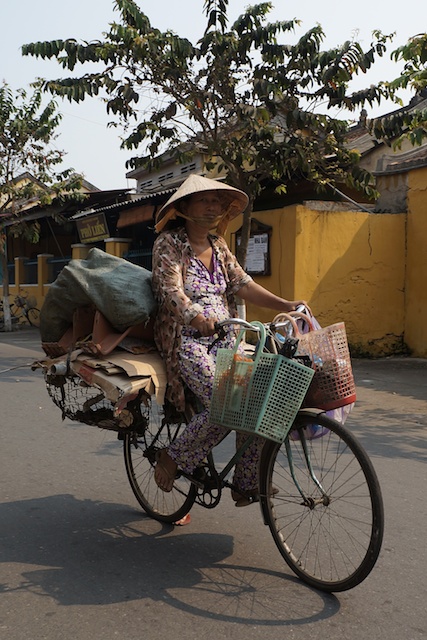 The buildings that stand today were built in the 18th and 19th centuries but some date back to the time when the town really flourished in the 16th century. Apparently, it is the only town in the whole of Vietnam that has been preserved so well. It escaped entirely unscathed from the war due to a ‘tactic agreement between all combatants’ to save it because it is so special.  Today it is protected by UNESCO World Heritage Site status and is once again booming thanks to the hundreds of tailor shops and other businesses that have grown to serve the tourist trade. 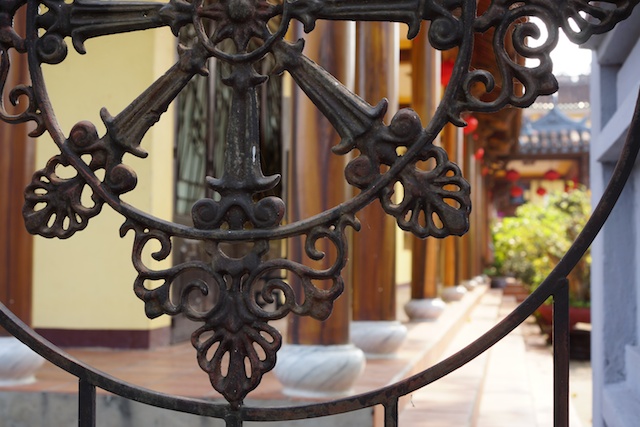 We arrived with our Easy Rider drivers and had to stop at a few places to find a reasonably priced place that had a room free.  We ended up spending the first night in room meant for long term residents, thinking we could settle there for a bit. I was excited at first that it came with a ‘kitchen’ but it was a big disappointment. It was actually just some empty cupboards, a sink and a gas burner with no gas. No fridge, no equipment (not even a knife!) so, no cooking for me.  The room was really not so good either, the bed did not seem clean, the bathroom needed a good scrub and there was no wifi!   The next day we paid, retrieved our passports and moved to a more conventional cheap hotel close by. 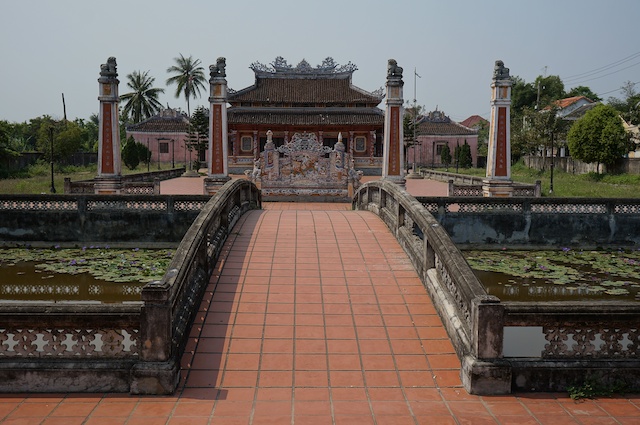 We ended up staying in a few different places in Hoi An, most of them were quite reasonable when you left the centre of town (where we had been looking when we first arrived.) The amount of visitors the town receives means that the standard of English is pretty good and, as long as they were not full, there was usually a deal to be done on the prices.

Shop in the old town

So, what did we get up to there? Well, the main attraction is the ancient part of town. it was only about 2km away so we explored on foot.  It was a pleasure to walk around because motorised traffic is banned from the area, leaving only peaceful bikes, cyclos and electric bikes to share the road with.   We were able to sneak a peak at some of the attractions that usually require entrance tickets without paying by arriving at the crack of dawn before the ticket collectors started. 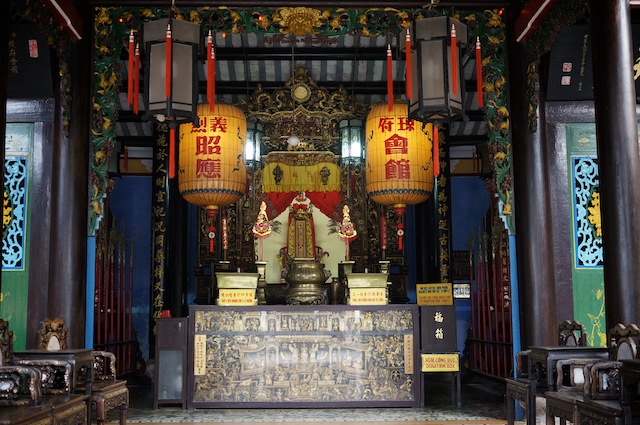 One of the Chinese Assembly halls

One of the most famous attractions is the Japanese Bridge.  It is the only known surviving example of a covered bridge with a Buddhist pagoda attached and was built in the early 17th century.   It is still used as a way to get across the river today and when we first arrived we saw this lady crossing with a live duck in the basket of her bicycle. 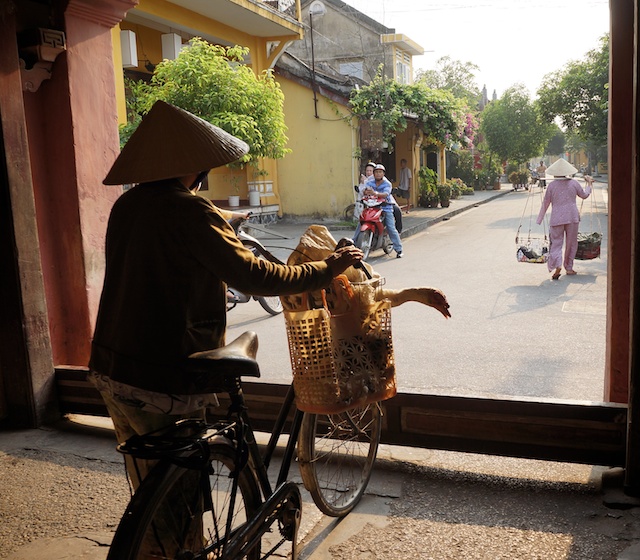 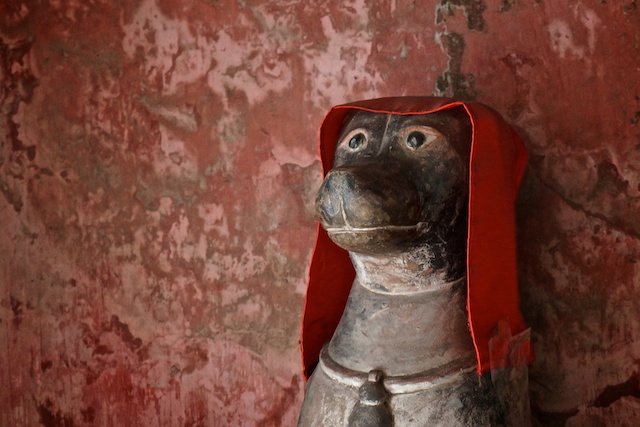 Inside the Japanese bridge there were several of these dog statues 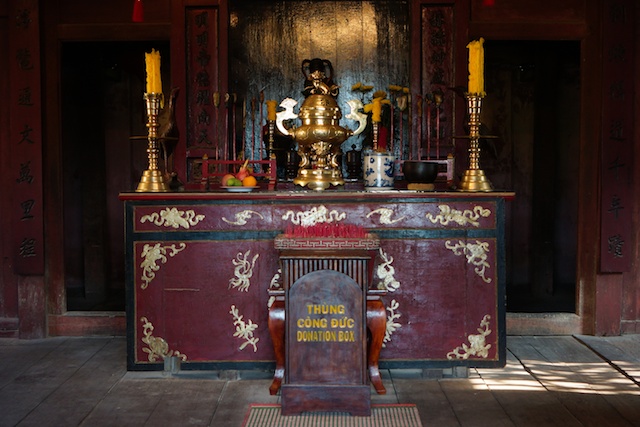 Perhaps the only remaining temple on a bridge

There are lanterns everywhere in the town which look pretty in the daytime and decorate almost every street.   There are also plenty of pagodas and meeting houses built by the visiting merchants to explore. 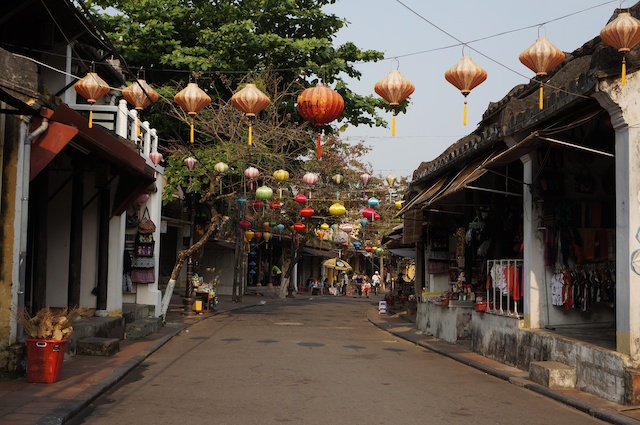 It was a nice place to wander around but we never really sat down for a coffee or some food in the ancient part of town because the prices were so high.  I baulked at paying 3 times more for a coffee than I knew it should cost. The shops were also very much aimed at tourists and had correspondingly high prices. 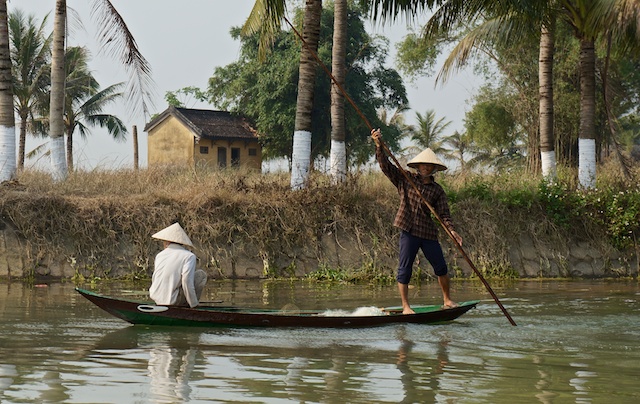 Life on the river

One morning we went on a boat trip around the harbour. We had the whole boat to ourselves for 30 minutes.  It was a relaxing sort of trip and a nice photo opportunity. 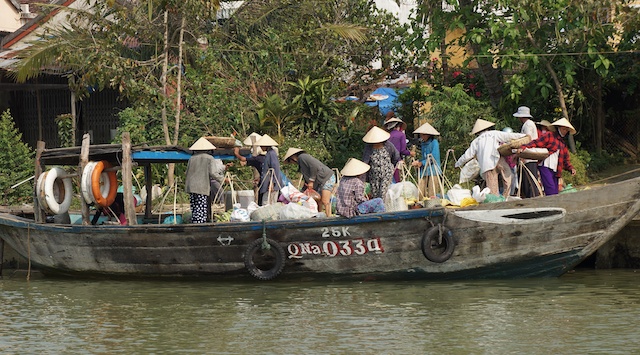 Unloading goods next to the market

The market was busy and aimed squarely at locals. There was all the usual fruits and vegetables on offer and a lot of live poultry. We got Henry a new vest (which has fallen apart already) but had to really talk to ourselves strictly to prevent us buying one of these beautiful ducklings! 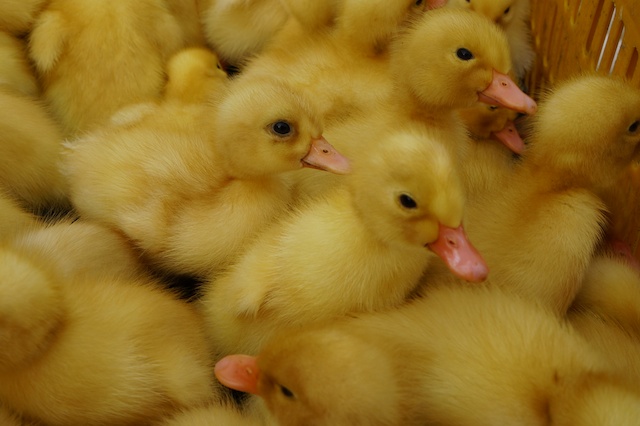 They were tiny and almost irresistible! 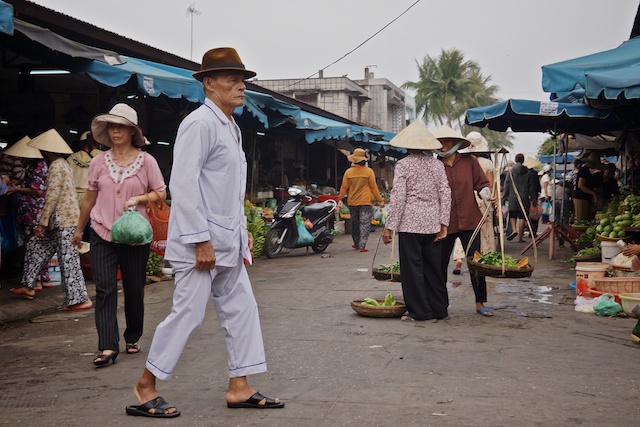 I finally managed to get a good pic of the pyjama outfit favoured by old men in Vietnam. It is quite a popular look 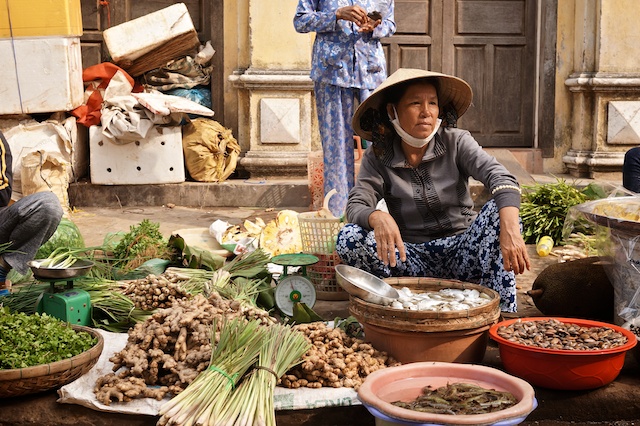 One thing I did a couple of times to let Henry get on with some work was take to the roads on a bicycle.  It was very cheap (£1) to hire a ‘good’ bike for the whole day. The best bike I had was quite new and equipped with a basket, a bell and working brakes (none of them had any gears though!) 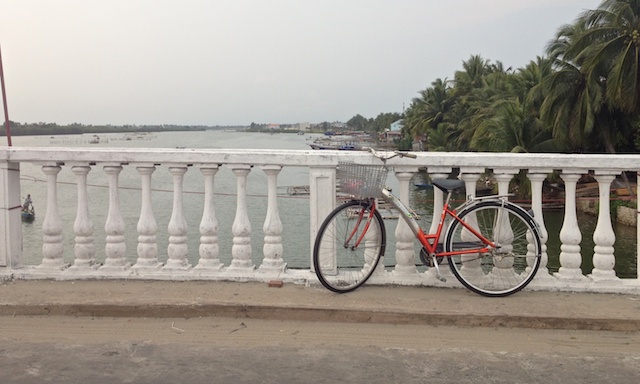 In my 17 years of driving I have never been so brave as to drive on the wrong side of the road so that took a bit of getting used to, I can tell you.  The roads are not too busy, so you round a corner and have no traffic to remind you which side you are supposed to be on! I got used to it eventually and was able to zip around the town like a local with the the wind in my hair and the sun on my shoulders. Lovely.  It is almost completely flat and my first adventure was to check out the beach.  It was about 12km away and we were thinking of moving there so I went to look at the accommodation options. (They were quite limited really and the only restaurants sold almost exclusively seafood so we didn’t end up moving there.) 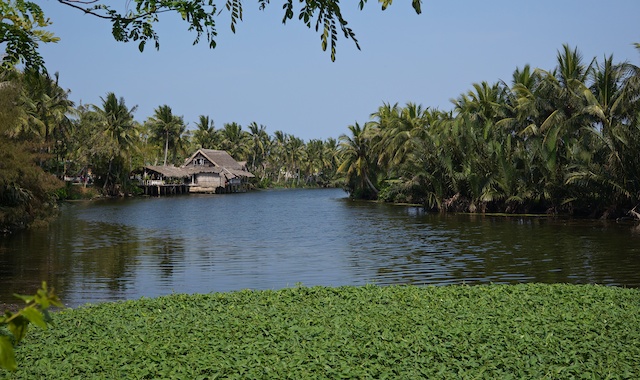 Taken on one of my bike rides on the outskirts of Hoi An. You may recognise this as I’ve used it as the new header for the site, the building you can see is where I stopped for coffee.

One of the main events we attended in Hoi An was Earth Hour.  It is an world wide event scheduled for the same date and time around the world. It is designed to raise awareness of climate change and the preciousness of our resources. This year it was on the 23rd of March at 8.30pm. The idea is that all over the world at 8.30 people will turn off their lights, T.V.’s etc and try not to use any electricity for 60 minutes. Lots of big cities take part and turn off the lights at major attractions. 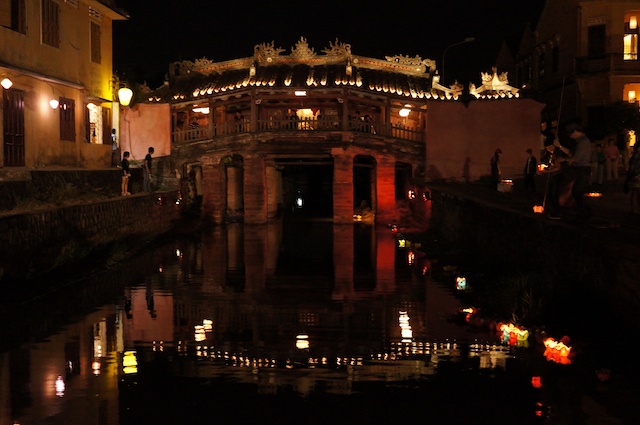 The Japanese Bridge at night

So, with fully charged cameras and the promise of a beautiful candlelit evening we headed into the old town.  It was far busier than any of the times we had been durning the day.  The whole area was heaving with tourists and locals and the hawkers were out in force. 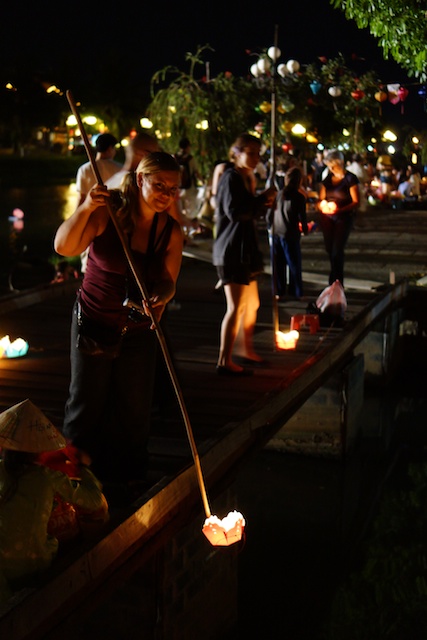 Me lowering my floating lantern into the river

We had a go at the very popular activity of placing a floating paper lantern into the water. We purchased them from a very sweet little girl who must have been only 8 or 9 years old.  Don’t worry though, I did thoroughly interview her first to ascertain that she attended school before we bought them from her so we didn’t really depart from our ‘ethical’ stance of not buying things from children because they should be in school… it was the evening time too. Anyway, everyone was at it, lowing their lantern down to the water level with a 10 foot long pole thing, and the result was quite beautiful. There were literally hundreds of lanterns peacefully meandering down the river, earning Hoi An the ‘magical’ badge in my opinion. 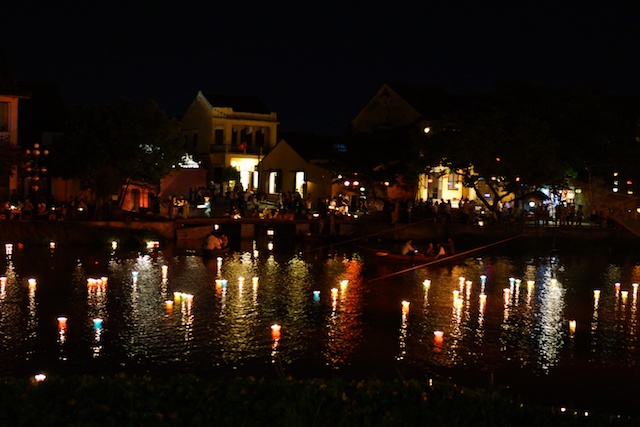 All the floating lanterns made for quite a beautiful scene

There was a stage ready for the countdown and a number of singing and dancing performances entertained the crowd before the shut down, as well as shows in the court yards of restaurants etc; with that and all the strings of coloured lanterns it gave the whole area a bit of a festival type feel. Luckily, we had seen most of the sights and taken in the atmosphere before the hour of darkness came upon us.  What I had been waiting for as a moment of even greater magic turned out to be a bit scary. 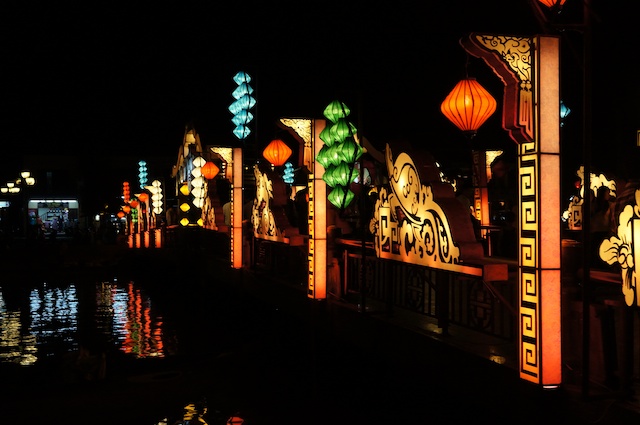 The main bridge we were on when the lights went out

Thousands of people, crowded into quite a small area were all of a sudden plunged into almost complete darkness.  Yes, the horn went off and everyone cheered but the moment of blackness was no moment… it was scheduled to last an hour! I had my phone with me so once we got past the crush on the main bridge where we were desperately trying to stay together, out came the trusty flashlight app on the phone and we headed directly back to the hotel.  It didn’t feel like someone was going to jump out and attack us, but the crush had shaken us a bit and we wanted out! It was a health and safety nightmare. 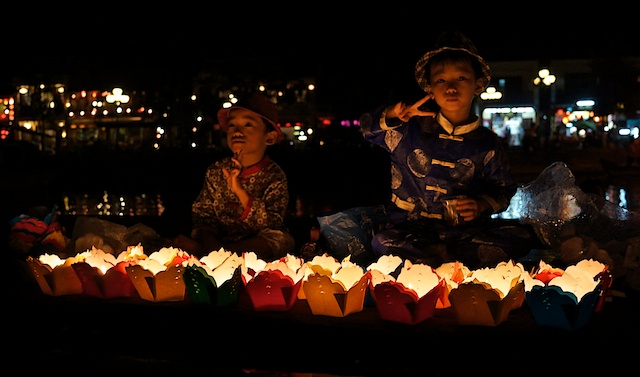 Before the lights went out

On the way back we saw policemen telling off a few restauranteurs who dared to let their diners see their dinner by more than a single candlelight and I’m sorry to say we put on a light and the air con as soon as we were back – at least 20 minutes before the end of the hour! The shame. 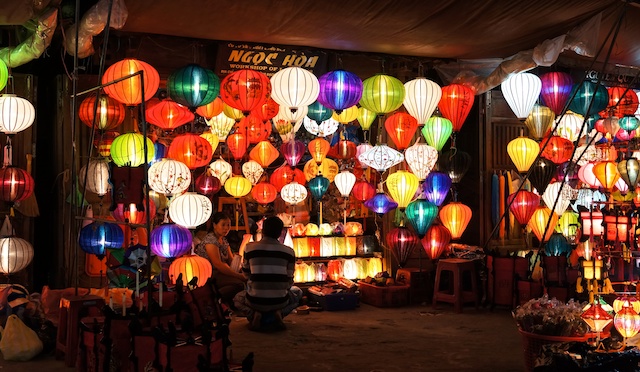 Lanterns, lanterns everywhere (for a price)
(also before the lights out)

After the evening of Earth Hour we decided we’d seen the best of Hoi An and were ready for a new base.  You’ll see the photos of our scenic journey to our next destination in my next post. 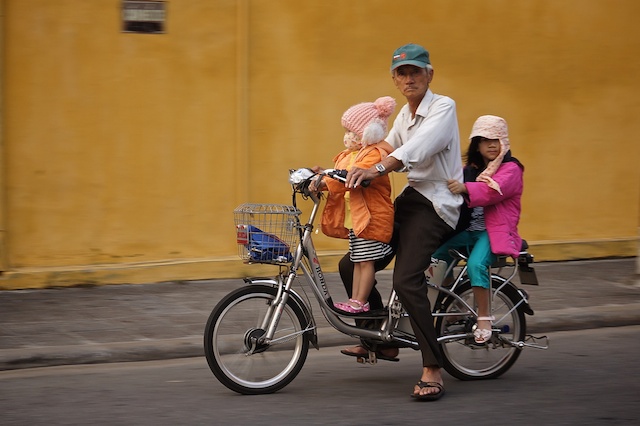 One of my favourite pics from Hoi An. Yes, the children are rather wrapped up and no, it was not at all cold. It seems quite normal to dress children like this to go on a bike;  wooly hats, earmuffs and padded coats even though it was at least 30°!