Coming to Cambodia and visiting The Killing Fields

After so long in Kuala Lumpur we felt a little bit sad to be leaving but also excited at the prospect of a whole new country to explore. We left the cleaner a small pile of clothes and my old Caribee 35l rucksack. This was to be the first test of my new, very cheap, fake Caterpillar rucksack with WHEELS, purchased a few weeks ago on the Petaling Street market of all things knock-off. 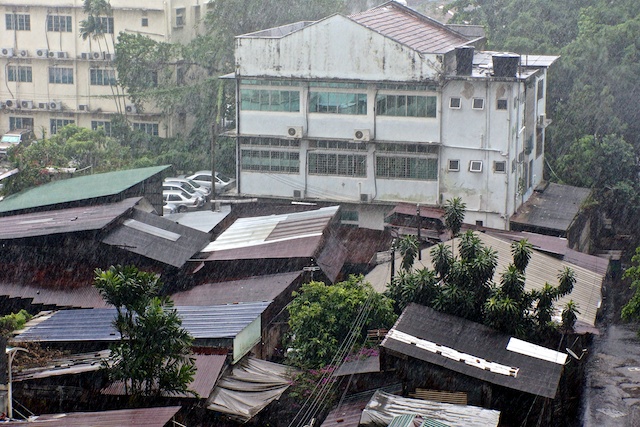 The view from out sixth floor balcony over the backstreets of China Town. We were leaving the rain in KL behind for the ‘cool and dry’ season in Cambodia.

I had booked us a flight to Phnom Penh, the capital of Cambodia.  This decision was reached simply by looking at Skyscanner and seeing where we could go that we had not already been for the cheapest price. Cambodia won.  We certainly are so lucky to be living this type of life for a while!

In the couple of days between booking the flight and actually taking it, I felt the need to do some research. My knowledge of Cambodia was sketchy at best.  I had some vague memories of the Khmer Rouge and Pol Pot but what I discovered (isn’t the internet an amazing resource?) was truly shocking. Google it. It is a pretty depressing true life story. The most striking thing about it all is that most of the really horrible stuff actually happened during our lifetime. Unlike the genocide presided over by Hitler and the awful goings on in Russia and China in the past (which I did learn about at school) the Khmer Rouge killed hundreds of thousands of people in 1978 alone, the year I was born, and I knew so little about it.  The end of the regime did not come until 1999, a year after the death of Pol Pot. I graduated in 1999. What excuse do I really have for my lack of knowledge?

Anyway, we packed up our things and headed off to the airport at the very reasonable time of 11am. There are so many benefits to be enjoyed by booking your own flights.  As well as the obvious flexibility of choosing when and where you will fly; you are also able to take advantage of things like online check-in and printing your own boarding passes.  (The hidden bonus of this being that you never go anywhere near the desk and their scales and so are able to smuggle a 8.5kg bag onto the flight when it is supposed to be under 7kg.)

Waving my phone under the scanner we printed off our boarding passes and went to wait in the crowded departure lounge with the loudest, most unintelligible speaker system we have ever come across. We had been here before. We flew to both the Philippines and Bali from this airport and as walked to board the plane we knew that after more than 2 months (3 for Henry) we were unlikely to be back in Kuala Lumpur again. 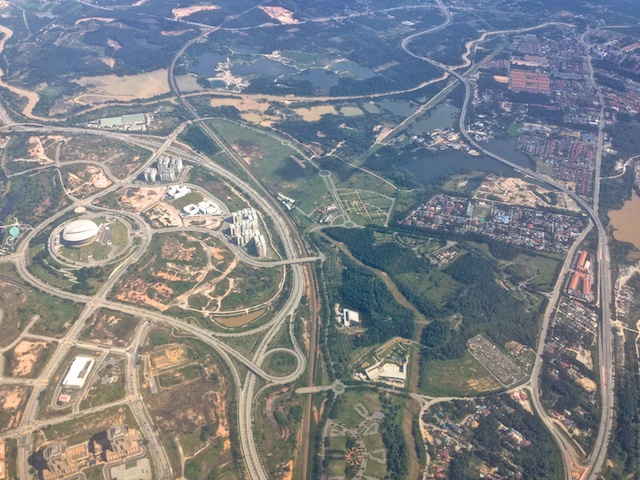 Our last glimpse of Malaysia

The flight was only 1 hour and 45 minutes and despite travelling further east we were actually moving an hour closer to GMT.  The Air Asia flight went smoothly and before long we touched down at the modern Phnom Penh International Airport. 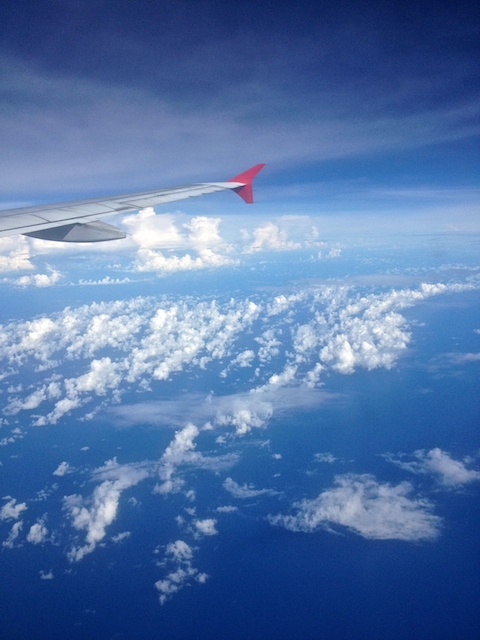 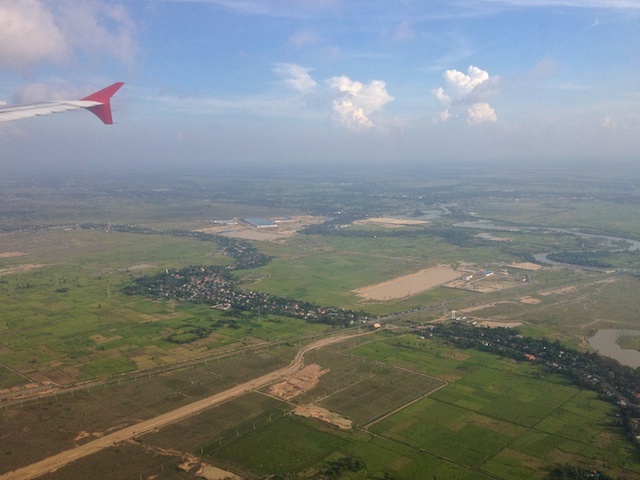 Cambodia from the air

Possibly the most exciting thing about the flight was that we were to be met by a tuk tuk driver with a placard bearing my name.  Having been in so many arrival halls and seeing so many other people greeted this way we were eager to see someone waiting just for us.  The guest house we had booked the night before had done what they had promised and there he was. A driver of about 17 was holding up a tatty piece of paper and chatting away to a neighbour. No negotiation was necessary; our small bags were loaded into the tuk tuk and we set off to the heart of the city centre. 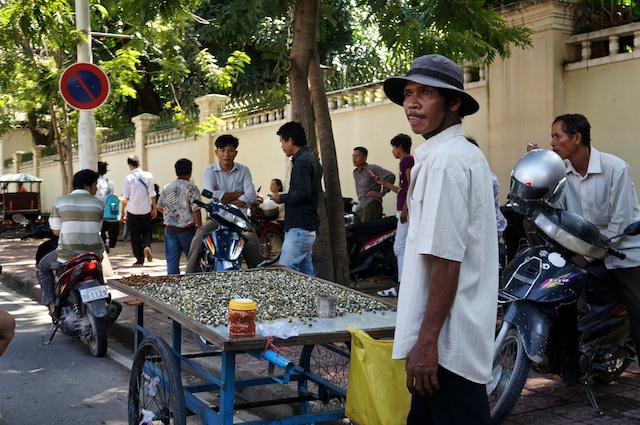 We settled into the room and headed straight out to explore before it got dark. Having read a few warnings about what could happen after dark we played it safe and ended up eating at the guesthouse and not venturing far at all.

We decided to use our first full day to see one of the major sights – the Killing Fields at Choeung Ek.  It is just one of the sites used by the Khmer Rouge to kill and bury their victims.  Today it has been turned into a memorial site where visitors can learn about the killings and pay their respects. 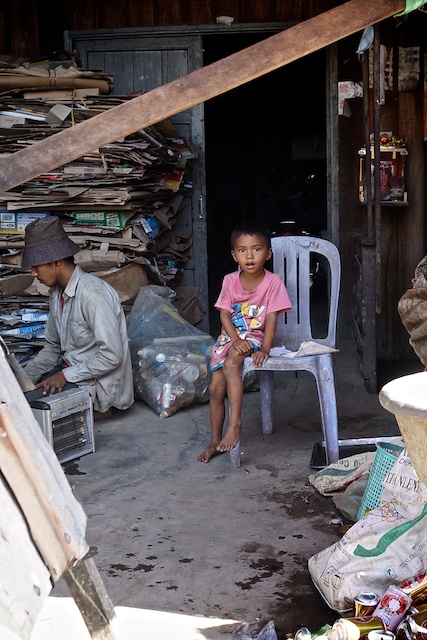 Taken on the way to the Killing Fields. Child sat in the midst of a small recycling operation

We went there by tuk tuk and that was an experience it itself. We are veteran tuk tuk (rickshaw) passengers now but they have usually stayed on at least partially paved roads. This was the roughest ride so far. On running into some early morning traffic on the 15km drive out there our driver decided on a countryside diversion and left the dusty, clogged main road for what can only be described as a dirt track-come-stream.  At one point the driver stopped to roll up his trousers before we plunged into a massive puddle at least a foot deep and 15 foot long. No photos were able to be taken on this leg of the journey as we had packed the cameras away for safe keeping. No bra in the world would have been supportive enough to counter the roughness of this ride. 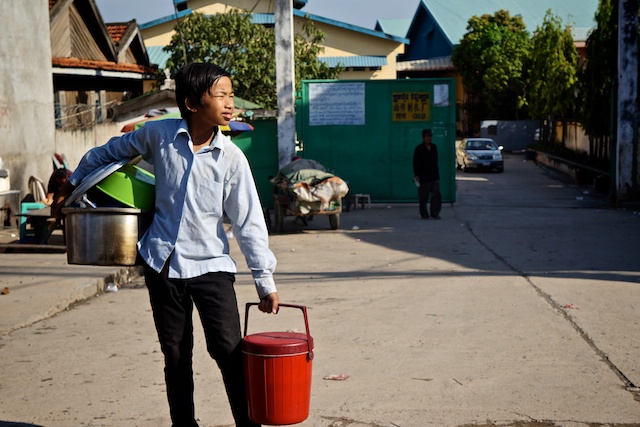 Another photo taken from the tuk tuk

It is a depressing visit, you cannot get away from that.  The mood of the whole place was sombre as we got rigged up with our portable audio tour equipment.  We were there early so it was not yet busy with other tourists.  The visit consisted of us wandering to different points, listening to the corresponding pieces of audio and looking at mass graves, signs marking different spots and the bones and clothes of the victims. All in all Henry was not impressed with the experience and felt without the audio tour it would have been “even worse”. I appreciated his point of view – it was not a fun or exciting trip at all – but felt it was important for us to know this stuff. 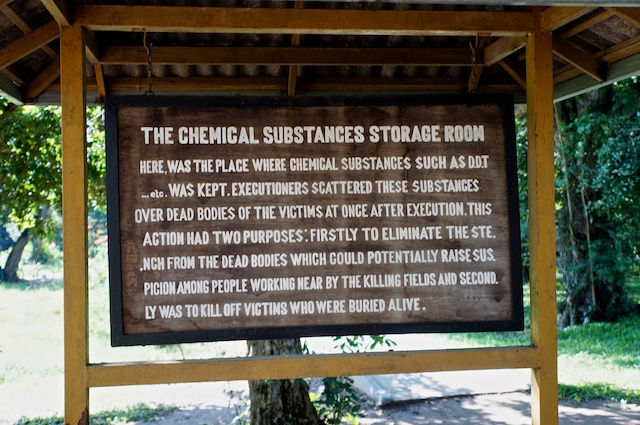 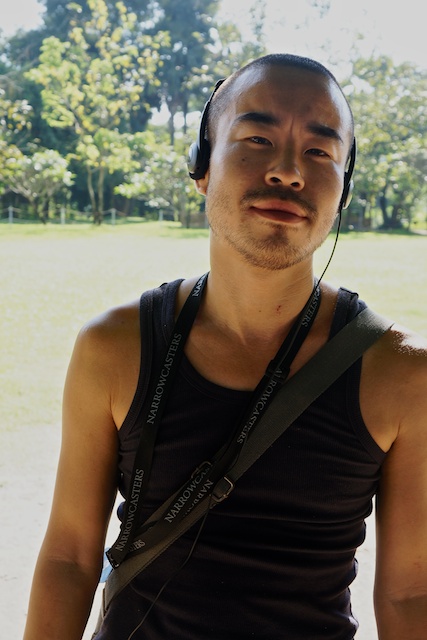 Listening to the audio tour

There are 129 mass graves at this site alone and 43 of them have not been touched. Very few of the more than 8,000 victims who have been exhumed were shot. The regime did not want to waste expensive bullets. Many of them were hit around the head with various agricultural implements and some had their throats cut with the sharp parts of this very tree. They had their hands tied and had to kneel by the shallow graves so the executioners did not have to move the bodies. 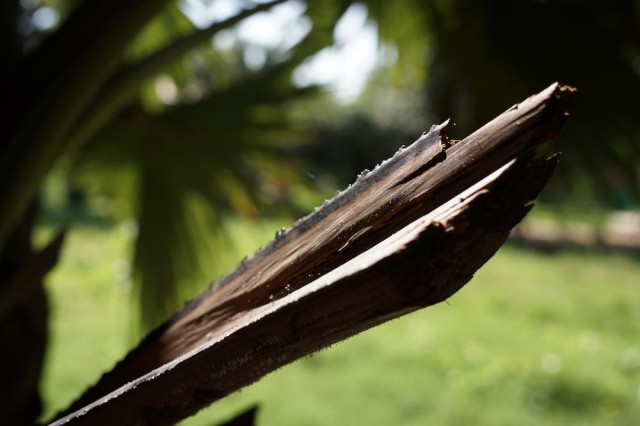 One grave uncovered was exclusively full of female bodies. They had no clothes on and had been beheaded. They were almost certainly raped before their deaths. 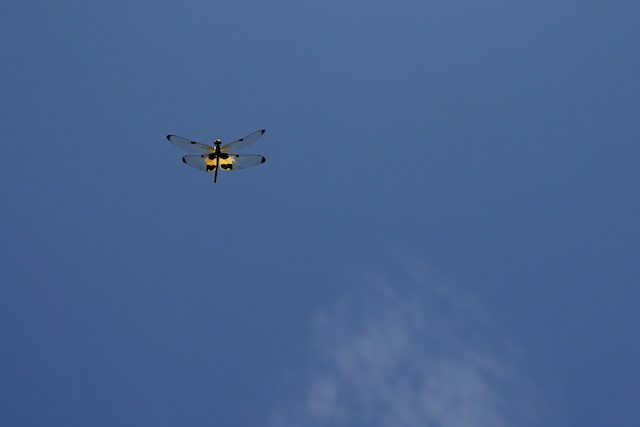 There were hundreds of this mystery flying insects above us.

Possibly the most moving part of the whole place was “The Killing Tree”. This is a large, established tree against which babies and children were swung by their ankles and their skulls smashed. Really. When the site was discovered there were still bits of brains, skull and hair caught in the bark and around the base of the tree.  There are still blood stains on the trunk. Apparently the thought was that the regime did not want any of these children growing up and seeking revenge for the murder of their parents. 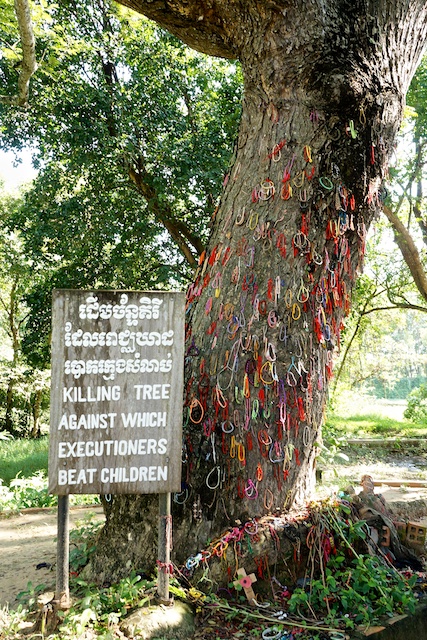 The Killing Tree, decorated with hundreds of friendship bracelets.

The thought of these graves being discovered is also quite grim. The story goes one man was harvesting potatoes and was disturbed by the stench. It was only a year or so since the most recently killed victims had been buried in these shallow, self dug, mass graves. Everything was still very much in a state of decomposition. How awful. At the time of the mass killings no one was aware of what went on at the site.  A PA system blared out patriotic music every time the murders happened to drown out the screams of the victims.  Bones, teeth and rags of clothes still come to the surface every time it rains and can be seen on the ground around the site. 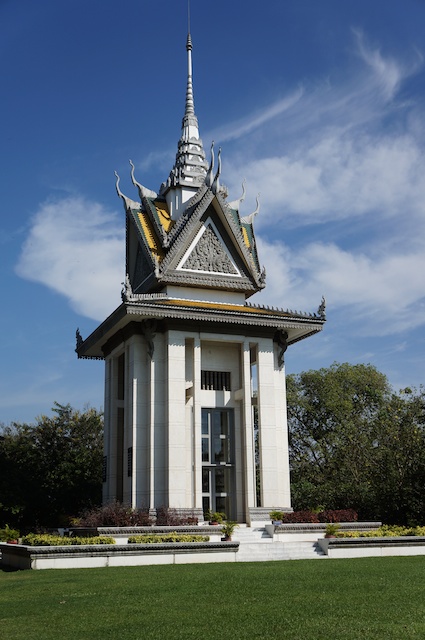 The guided audio tour ended with a visit to the Buddhist memorial stupa where over 8000 skulls have been housed as a sign of respect. 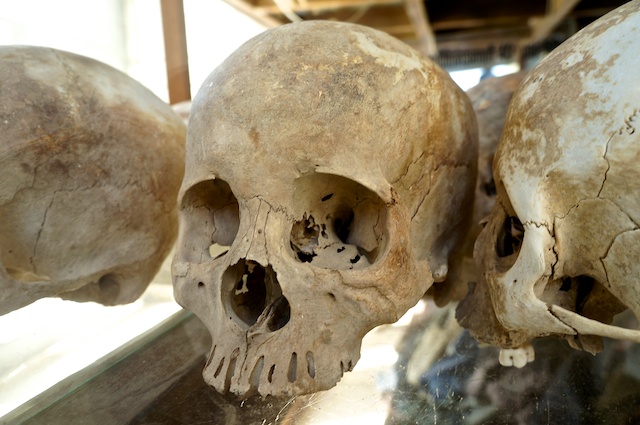 Here are some of the most shocking facts I’ve learnt about the Khmer Rouge regime:

So there you have it, our introduction to this small, poor country was interesting and solemn. I’ll leave it there and sort out a few photos of Phnom Penh for the next post.
Phnom Penh: 25th – 26th November 2012
Tagged with: Air Asia, audio tour, benefits of booking your own flights, Cambodia, carry on, Choeung Ek, genocide, hand luggage, Khmer Rouge, Kuala Lumpur, online check in, our stuff, Phnom Penh, Pol Pots, rucksack with wheels, sad, solemn, the Killing Fields, The Killing Tree, transport, travel, tuk - tuk

2 thoughts on “Coming to Cambodia and visiting The Killing Fields”