Disaster: The WORST Day of Our Adventure By Far

So, it has been just over a week now and I think I’m ready to write about it… We were burgled. Our room and our bags were violated. For the first time in exactly 760 days of travel someone stole our stuff! Our laptops no less!  Yes, both of them.

“How did this happen?” I hear you think. That is almost the worst thing about the whole ugly business. We left the window open.  In some ways we have only ourselves to blame. We don’t only blame ourselves though. We also blame the scoundrels from room 317 of the D’Oriental Inn in Chinatown, Kuala Lumpur.  Their (3rd floor) window was pretty close to ours and the CCTV shows nobody went into the door of our room meaning they must have gone in through the window.  We were only gone for a couple of hours and returned to a nightmare.

So, what was taken? In order of value I shall list our losses:

They also destroyed Henry’s main bag (North Face Recon) and my small red backpack (Case Logic) which had both been locked with mini padlocks. 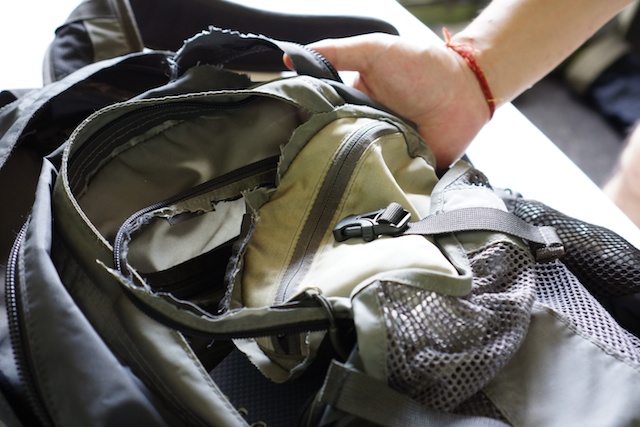 They did not take our passports which were with the laptops and our money was (as always) with us.

So, those are the losses you can put a monetary value on. What else did we lose? Firstly, we lost some photographs. We both back up our images to the cloud (Henry to SkyDrive and me to Google’s Picasa) as well as having local backups. What was most unfortunate was that although I had backed up just 2 days before the incident it was to my external hard drive (partitioned so that half was acting as a Time Machine) and that was also stolen. Henry’s local backup (his Time Machine) was luckily on a USB memory stick (a 128GB one!) and that was in his technical bits and bobs pencil case which they didn’t even open. He lost about 3 weeks of photos. I lost 2 months. All of my photos from my visit back to the UK. My early family Christmas. A friends birthday party. Gone. And I felt pretty confident about my backup regime; I’m the type of person who nags other people about their backups! It goes to show that however good your system is, it does not stand up to the test unless you implement it fully and regularly. I feel like I failed the test and now need to try much harder. 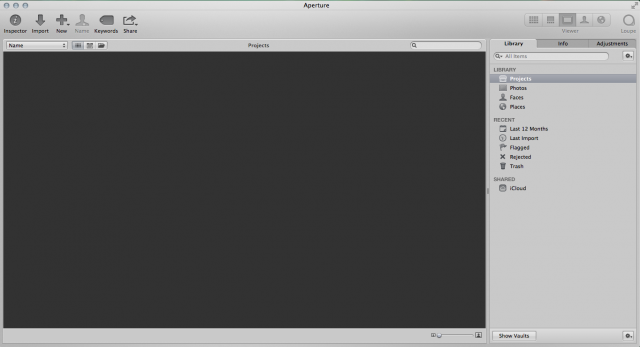 Aperture on my new laptop with 0 photos

I also lost the website that I had spent weeks and weeks building for teaching English online. It was good – nearly ready to be launched but my procrastination over the last few details meant I had not yet uploaded it to the internet. That is now gone forever. (Again, it was backed up on the external drive but those backups have proved useless in this instance.)  All our important documents like copies of our passports, vaccinations, stuff to do with the house and taxes as well as my collection of teaching resources were all on Dropbox so they were fine.

I also lost ALL my music. Not permanently – I have most of it on an external drive at home but I now have nothing with me. Not one tune. It does mean there is much more space on my computer though.

An old photo of my lovely laptop and perfect Incase sleeve that is no more.

Henry’s system stood up to the test better than mine. Probably because at first glance his Time Machine did not look like it was very big or expensive, despite it costing about the same as my 500GB one. All his important documents were on Dropbox so he just logged onto that from his phone and unsynced the stolen machine.  His Time Machine backup meant that his new laptop was magically made to have everything his old laptop had just a few weeks ago. All his applications, music and everything else were fine. He lost just a few weeks of photos. 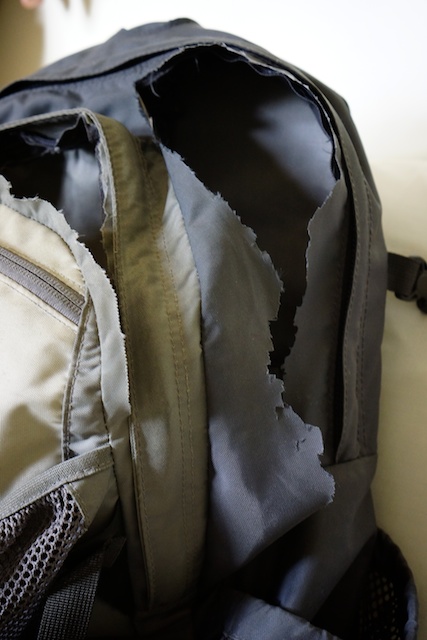 Another shot of Henry’s bag – cut in two places

I did have the ‘Find My Mac’ linked to my phone so I was able to lock it remotely but it hasn’t yet shown up to be tracked (that happens when it goes online.)  We both use 1Password so all our passwords were pretty safe; even if they had been able to hack into our user accounts they wouldn’t have been able to access those.

So, what have we learnt from this disaster? Well, don’t EVER leave the window open for starters. Secondly, backup, backup and backup again, especially photos, and thirdly that the Malaysian police are a bit rubbish.

We of course reported it as soon as it happened and were taken to the Tourist Police HQ where I had to first hand write the report of what happened and what was taken and then type it into their computer system for them. A sergeant and a photographer turned up a few hours later to the hotel and took some photos and another list of what was taken along with the car registration, ID numbers and CCTV footage of the criminals checking out which they got from the hotel staff. We’ve heard nothing at all despite me offering a “reward” (bribe) to the officers who took us to and from the station for the return of the laptops. 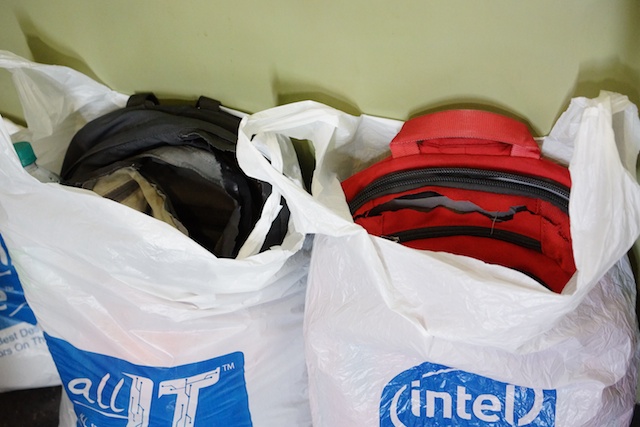 Our cut up backpacks bagged up and ready for the bin.

8 thoughts on “Disaster: The WORST Day of Our Adventure By Far”