A Lion Dance with a Difference and the Great Tangyuan Giveaway! 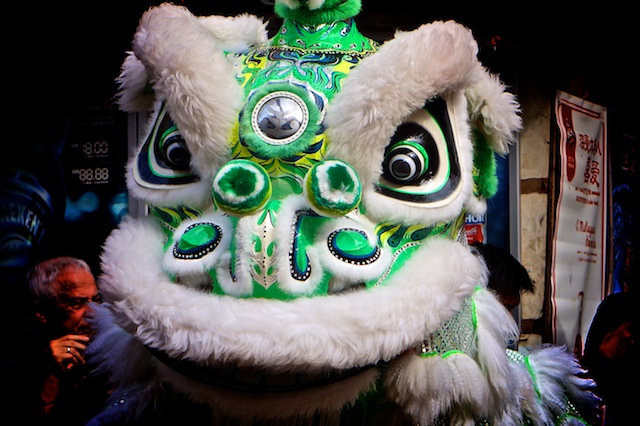 The 22nd of December is the day of the solstice or midwinter’s day. While people back home in the UK were probably feeling uplifted by the fact that days would soon be getting longer, here in Kuala Lumpur the sunrise and sunset times vary little across the year so I didn’t give it a second thought. But in Malaysia there is often a festival of some kind or another and we stumbled across a full blown celebration right outside our hotel last Sunday. 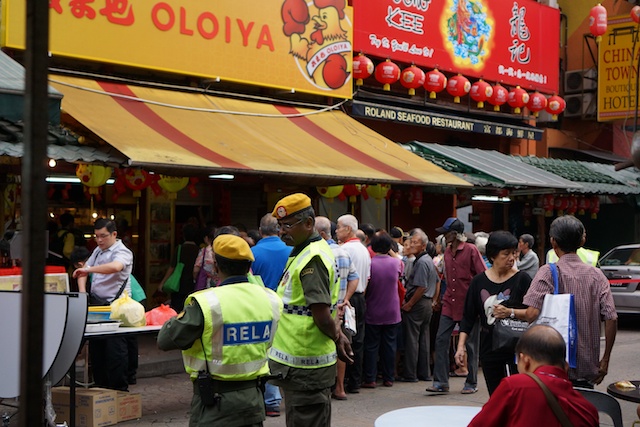 The start of the queue that alerted us

We’d been out and about early taking photos of the illegal market that happens everyday here in Chinatown (yes, the same one we frequented last year – I’ll do another post on that sometime)  and we emerged from the alley to see a queue forming outside a dried meat shop.  Curious as to what was going on I enquired and was told that it was the Dongzhi Festival and they were giving away free food, it was all due to start at 10am.  As it was only 7.30 we decided to check out if anything was going on at the local Chinese temple in the meantime.  The Guan Di temple is just around the corner in Chinatown on Jalan Tun HS Lee. Guan Di is the god of war who is worshipped  for his heroic, loyal and righteous character more than for being war-like. 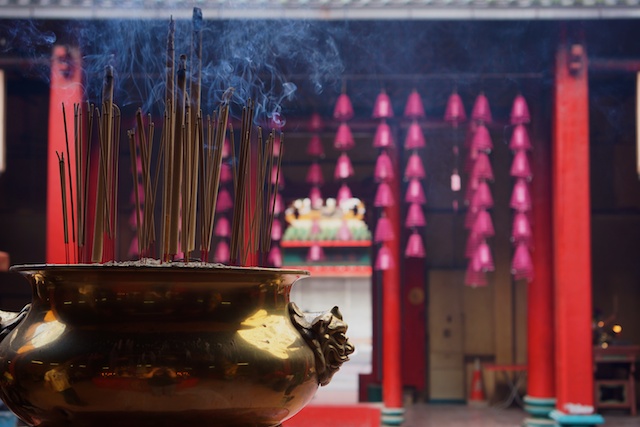 The temple was perhaps a little more busy than usual (we’ve popped in quite a few times) but it was still quite early. 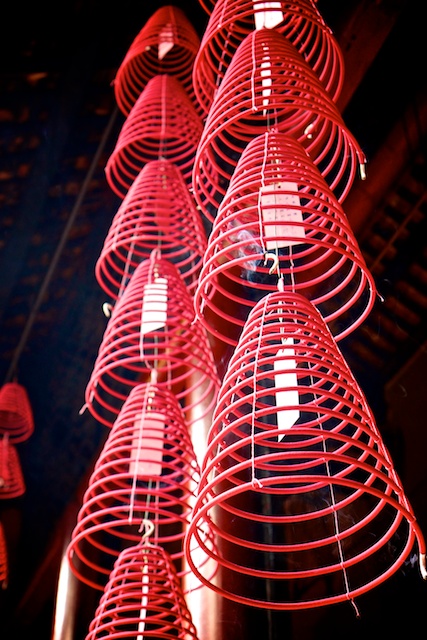 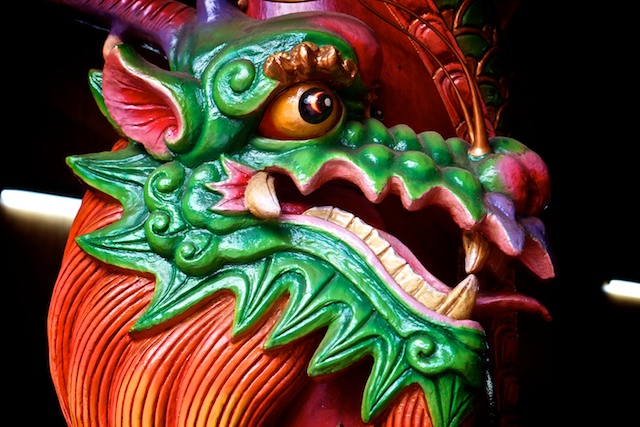 We made our way back to the queue to see some mysterious poles being set up and we caught sight of a lion dance costume. There were about 20 or so boys and young men putting together these poles with small platforms on the top, varying in height from about 5 foot to I suppose 10 foot. 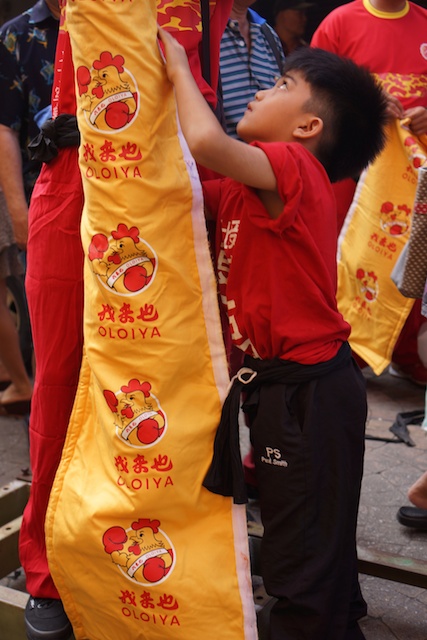 You couldn’t fail to miss who was sponsoring this event

The queue had grown considerably but the free food was not yet being given out. We waited until the designated start time and watched everything get set up.  The musical instruments came out, the performers got their costumes on and finally, everything was set! 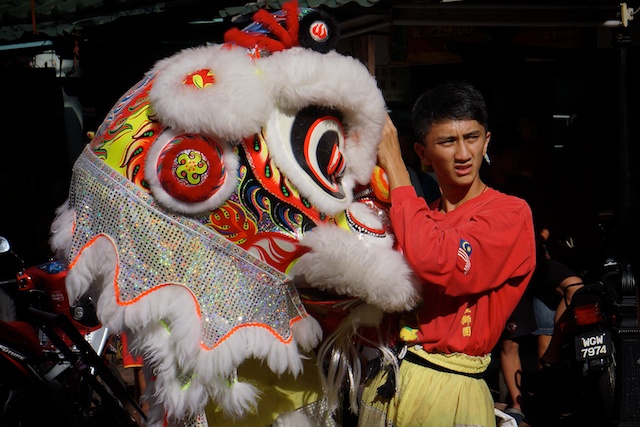 It was at least 30° that morning, I can’t imagine how warm they are inside the lion 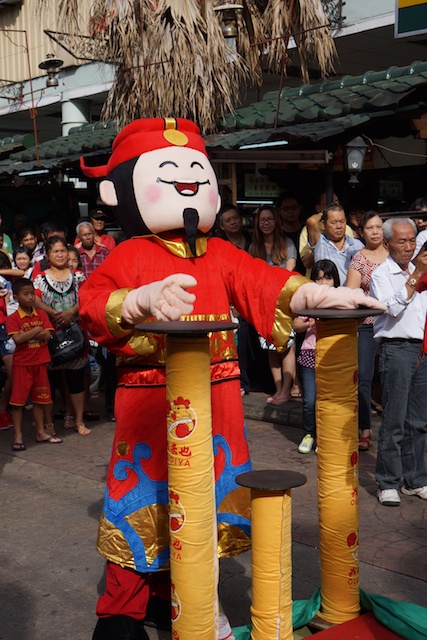 This character seems to be the ‘baddy’ of the performance, seen standing at the short end of the poles where the lions jumped on

Finally, at 10am the dance kicked off.  Now, we’ve seen many lion dance troupes in the last couple of years, most frequently in HCMC last Tet (Vietnamese New Year) but, we’ve never seen it on poles before.  It was very impressive indeed. 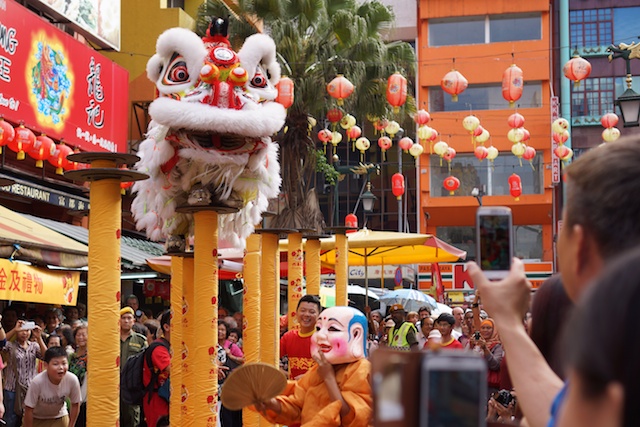 The drums boomed, the cymbals clanged and 2 different lions lept from platform to platform.  At some points the man who was the head of the lion must have been almost 20 feet in the air, being thrown by the strong hind section of the lion. 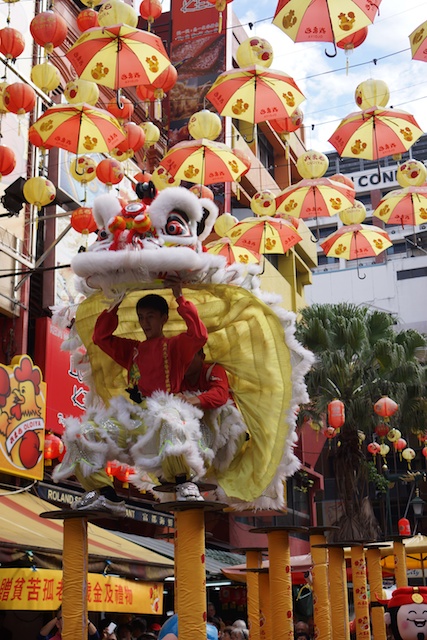 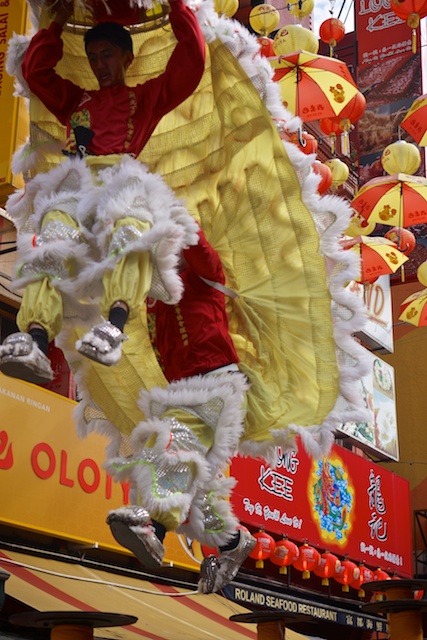 All 4 feet off the platforms!

The second lion was green and did a similar performance: 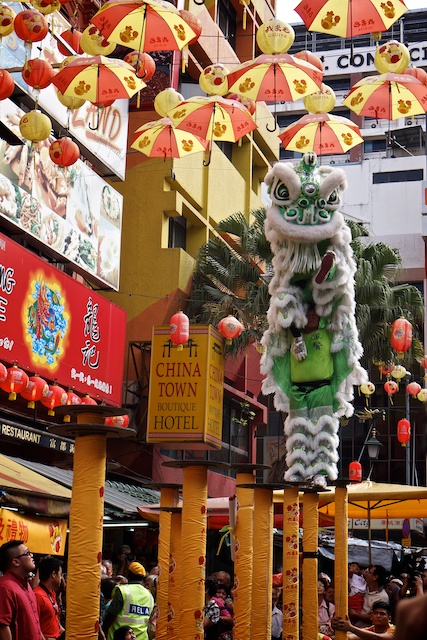 Stretching to an impressive height 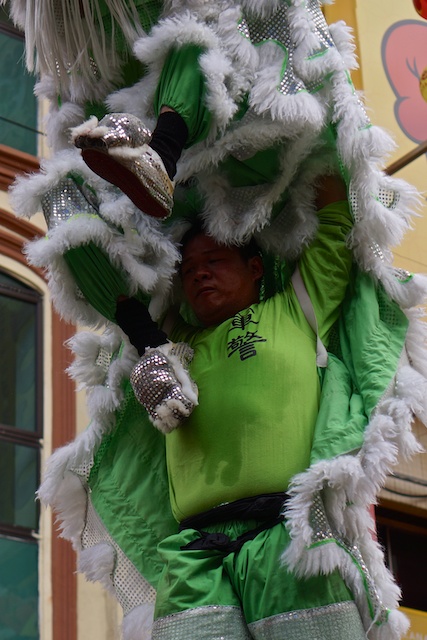 You can see how hard he is working

At one point the green lion took a fall but the music continued and they got back up and carried on. 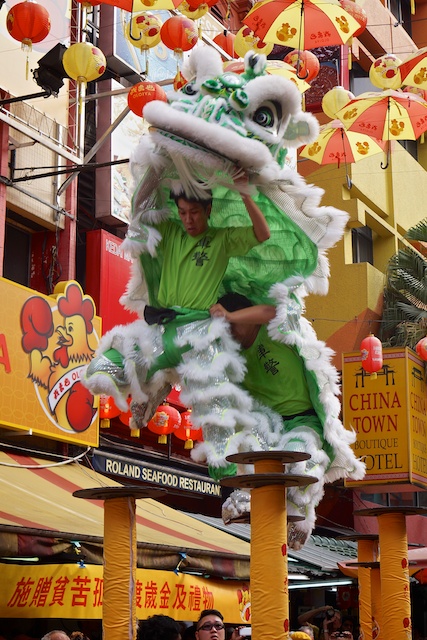 The ‘Chinatown Boutique Hotel’ you can see in the background is where we’re staying. 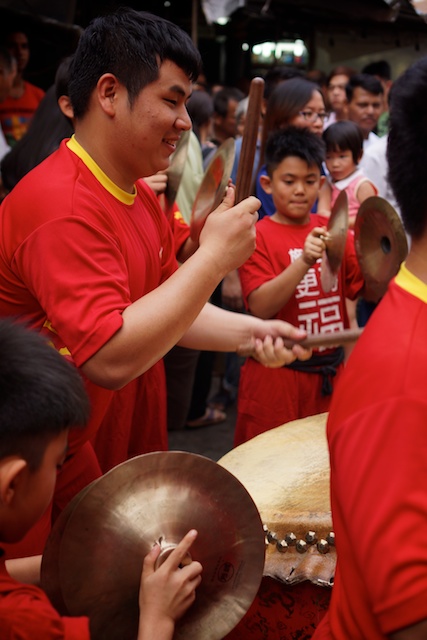 The music was loud and not particularly melodic

Once it was all over the crowds dissipated and left the crew to take down all the poles. The queue was bigger than ever though. By this time the people in the queue had been there for over 2 hours. I don’t know if it because it is only the old who have the patience to queue in the heat like that or because eating Tangyuan (Wiki link) is said to extend your life but the average age of those in the queue was pretty high. 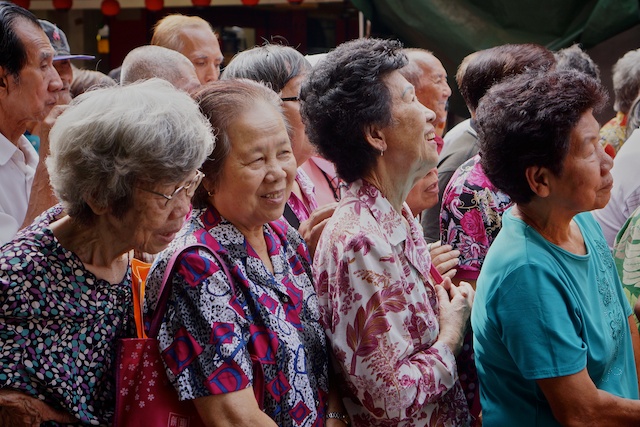 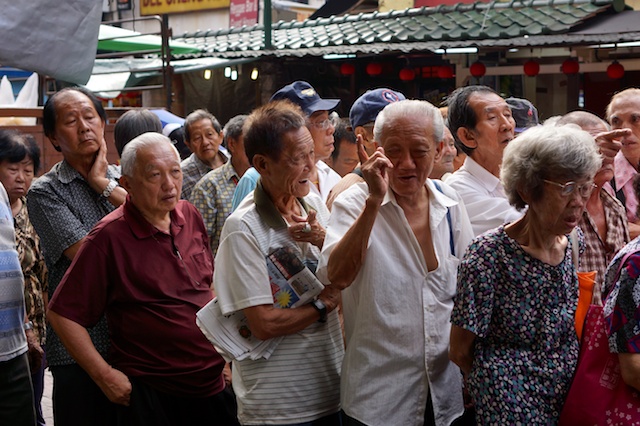 So, that was the winter solstice here in Kuala Lumpur.  As a finishing touch to this post I’m going to do something I’ve never done before on this blog…. I’m going to include a video!! I know! When I visited the UK a good friend asked me why there were no videos on the site and apart from talking about how Henry and I really value the importance of a good photo, capturing just that one moment in time, I couldn’t really give a satisfactory answer.   So, here it goes… please let me know if you can view it properly or if there are any problems. I shot it on the iPhone so the file wasn’t too big and I’ve not got a steady filmmakers hand but everyone has to start somewhere right? Please enjoy a one minute clip of the lion dance: