Today was quite stressful. Ever since we decided to embark on this voyage, we have perhaps been guilty of not planning as much as we could have. We have no solid plans about where we are going, what we are going to do, and when we are doing it. Some people may think this is rather odd, but for me at least, this journey is an experiment in attempting to live the life of a digital nomad; traveling the world whilst working from a laptop, and is much more about living rather than doing. However, this carefree attitude caught up with us today as our attempted journey north ended with us going round in circles due to our lack of planning. 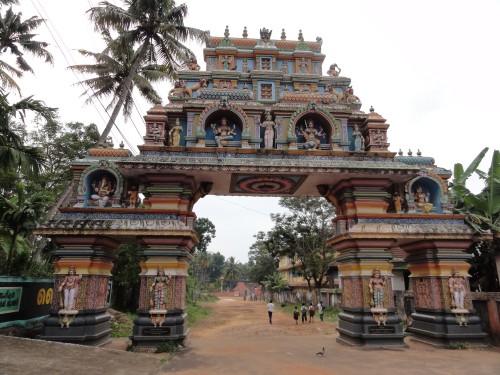 Attempt 1
Having managed to survive the trip to the Post Office, we packed up our bags, said goodbye to Sureesh and jumped into a rickshaw (crazy looking 3 wheeler taxis with a handlebar instead of steering wheel) with instructions to take us to a place named BlueWater Beach Resort a few miles away in Edava. When you’re planning to travel in a foreign country, it’s perhaps a good idea to at least phone ahead to check to see if space was available, but Jen’s idea of “Lets just turn up and see what happens” backfired when upon arrival, we discovered the only room available came without air conditioning and was much more expensive than anticipated.

We asked the rickshaw driver if he knew of any nearby accommodation and managed to decipher his broken English to learn that we could stay at his house(!) (Considering the fact that 10 minutes earlier he pulled out a newspaper wrapped package of cannabis and said: ” You like smoke? 10 gram for 1000 Rupees. Very nice.” – we declined) we should have said no, but with our gung-ho attitude still firmly in place, we accepted the rickshaw drivers offer and 5 minutes later arrived outside a rather nice looking house further into town. Discovering that this brightly coloured and welcoming family home was in fact his sister’s place and that he wasn’t actually a dangerous drug baron, we looked around and accepted to stay the night.

I remember reading somewhere that when traveling long term you will be faced with making many decisions on a regular and often tiring basis. Lost in a foreign country, not speaking the local language and looking for a place to stay, some of these decisions can turn out hasty –  this was certainly case as we decided to leave the house 10 minutes later since it did not offer internet facilities, which we have had no access to for days. We packed our bags, declined the offer of a reduction of rent from R1000 to R500 (seems like a generous price reduction, but we are quickly learning that prices for foreigners are always highly inflated; particularly when you are carrying a stuffed rucksack on your back) and started walking. Luckily, it turned out the house was actually very near to Varkala where we had just left and we found our way back to a internet cafe and started our search again.

Attempt 2
I guess we should have learned our lesson by now, but after 20 minutes of quick research and ignoring a New Zealand man’s advice of “Slow down, acclimatise and chill out”, we jumped into another rickshaw and decided that a town further north named Kappil would have places to stay.

15 minutes later, the driver stops at a rocky beach point overlooking the Arabic sea with a large beautiful lake opposite the other side of the road. “This is Kappil” the driver announced. I thought the driver had stopped at this scenic location to allow us to take photographs, but it turns out that Kappil is just the name of the beach – not a town in itself. Oh dear. As ever, the rickshaw driver was happy to help (most people are) and advised of a holiday resort just 1 minute further down the long stretch of road.

Attempt 3
Arriving at Lake Saga Hotel, we were excited to learn that it offered everything we could possibly want from a place of accommodation: great scenic location, affordable rates, internet facilities, laundry service, restaurant, bottled water, a doctor on call and even speedboats for hire on the beautiful lake behind the hotel. At least that’s what their brochure said.

Having already agreed and paid to stay for a few nights we quickly learned that half of what their brochure stated was untrue, discovering 10 minutes later that the place had no hot water, laundry service, internet and certainly no speedboat! This was disappointing as we had not showered for a few days and had few clean items of clean clothing left. Jen wanted to leave. I wanted to scream. We packed our stuff and confronted the staff. “The brochure is old.” the clerk explained. “We’re leaving” I said.

Attempt 4
With the benefit of good old hindsight, it would have been a better idea to stay at Lake Saga hotel. The complex sits in the middle of a long stretch of road on Kappil beach with nothing but scenery for miles and it would have probably been a better idea to call the previous rickshaw driver, and not decide to walk to the next town using only Google Maps on my phone for navigation.

We trudged along on the long stony road with the breeze of the Arabian sea to our left. Whilst excited that we steering off the beaten track and away from tourist world, I was starting to get worried if we would find a suitable place to stay. Jen was getting tired and stressed and we probably didn’t appreciate the beautiful surroundings we were in; frustrated not to have to found a suitable place at this point.

We walked for about 30 minutes and started to see some small shops and people as we entered the fringes of the town Pararvur. We must have looked rather interesting to the locals. If the unusual sight of a white caucasian woman wasn’t interesting enough for them to look at, they also had the option of the sweaty oriental chap walking alongside her. Old people would stare, kids would say hello, smile or giggle, and workers would down their tools to look at us as we stumbled through their town.

Eventually we managed to find some accommodation (the only place in town we were told) for R500 a night. Well that was the price for us at least. Upon entering our names and details into the guestbook I noticed that all the other (non foreign?) guests were paying R200 for the same standard room. We were warned before our travels that as foreigners we would be overcharged and ripped off, but it doesn’t make it any easier when it happens, leaving me with a bad feeling even before we had even seen the room. Jen must have picked up the same vibes and she ended up having an argument with 3 men about a dripping toilet(!). We decided not to stay and stumbled across to the local internet cafe opposite the street to find somewhere else.

Tired, sweaty, hungry and frustrated we spent the next hour planning our next move and eventually decided it would be better to head back to Varkala from where we had first tried to escape. It was nearing sunset at this point and our heads were scrambled but we finally found, phoned and booked a suitable room at a resort named Haiwa located near Varkala cliff. With tails firmly between our legs we jumped into a nearby rickshaw, with our moods slightly peppered by a smiley 15 year old friend of the driver suddenly jumping into the vehicle as it left who proceeded to chat with us on the journey back.

2 thoughts on “Escape From Varkala”