Joining in a Street Photography Outing 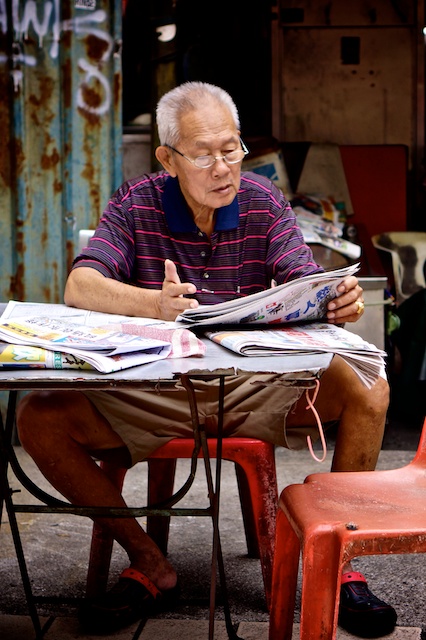 Last Saturday we were just wandering along Jalan Sultan, snapping pictures of men reading the paper and a barber with a head torch doing something to a man’s ear (you decide!) when we noticed a group of people with cameras.  We like a photowalk and it looked like this was one! 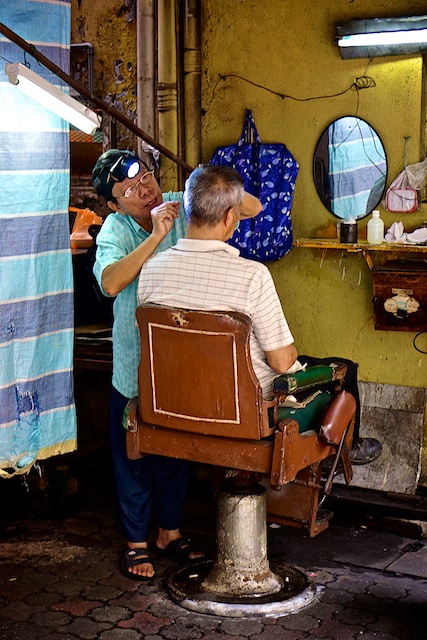 I’ve decided he is probably cleaning out his ear

No sooner had we seen them than we spotted and were spotted by Raja; a street photographer we met on the World Wide Photowalk last year here in KL.  He is a talented photographer and we’d kept in touch via Facebook. (You can check out his photos on his Facebook page Ripi Photography) Anyway, it soon transpired that it was indeed a photowalk and we were welcome to join in! Brilliant.

The walk was organised by FJM (Fotografi Jalanan Malaysia ‘Street Photography Malaysia’) who have a large (12,000+) membership throughout the country and arrange regular walks for their members. As we started to mingle I was told that everyone was shooting in black and white for the day as well as keeping the RAW file (so you can see it in colour too) so, we changed our settings and were off! 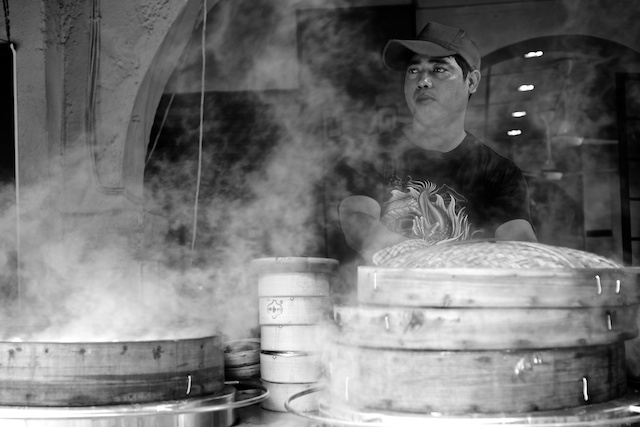 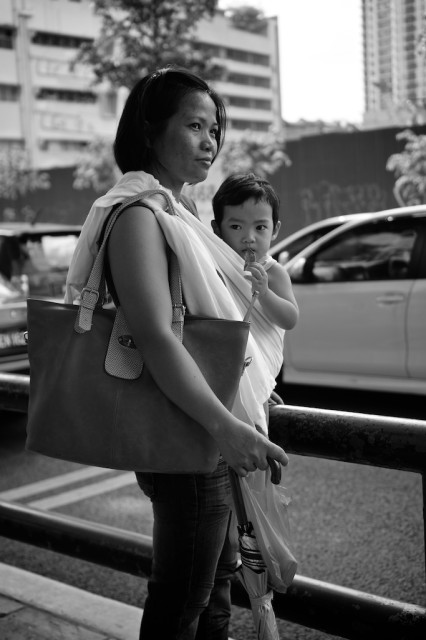 Woman and Child on Jalan Pudu

Here are a few of my favourite shots I took on the walk in the order I took them: 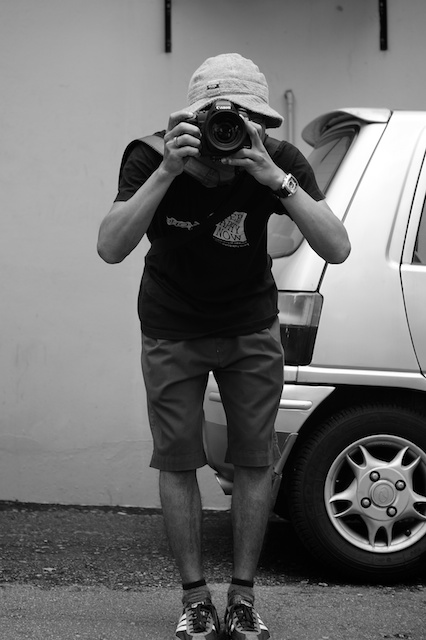 I become the subject! 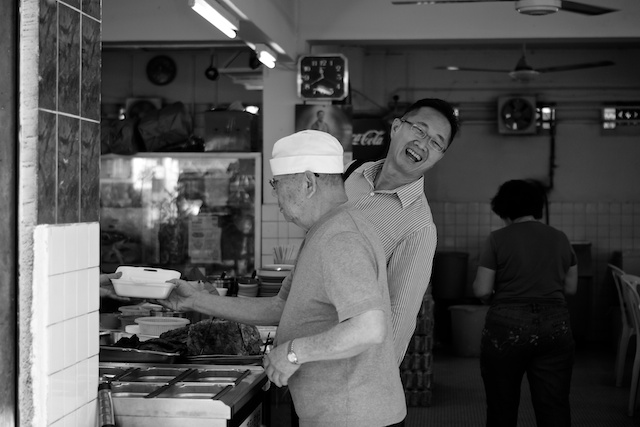 He spotted me!
(Jalan Tong Shin) 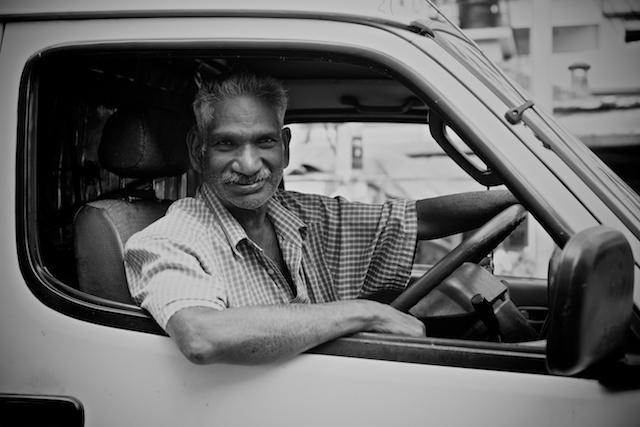 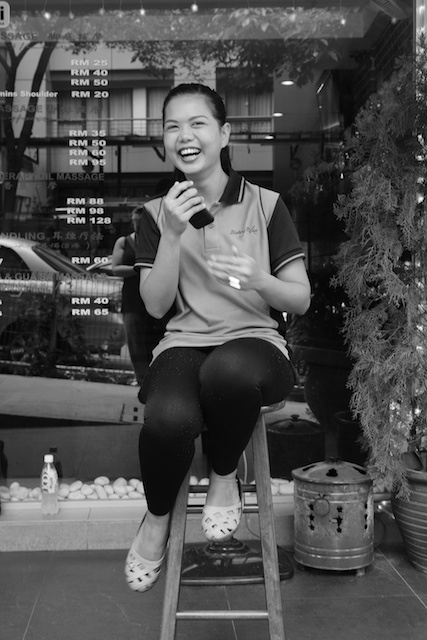 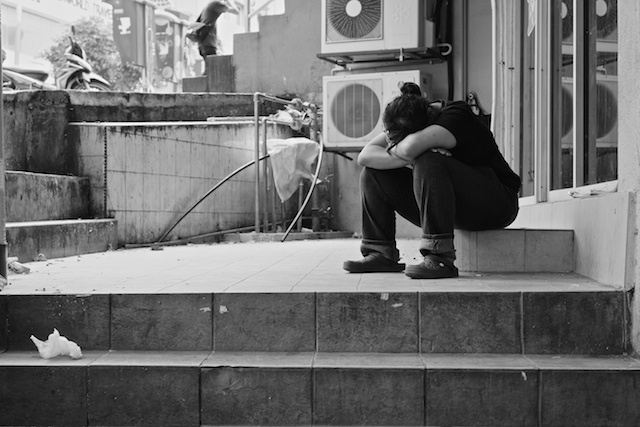 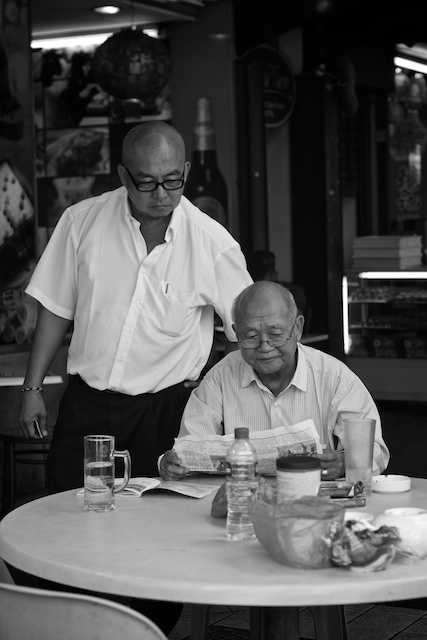 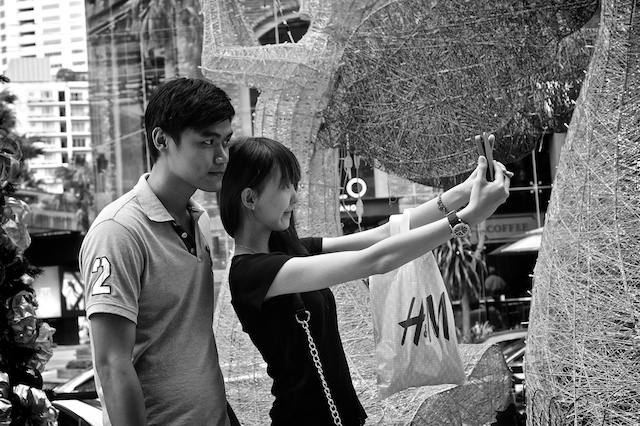 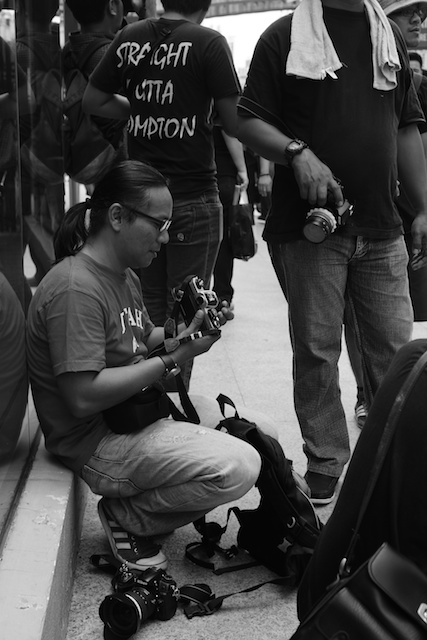 One of our number checking his equipment 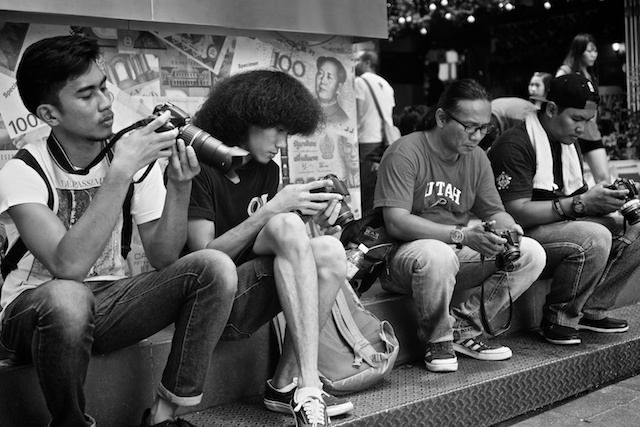 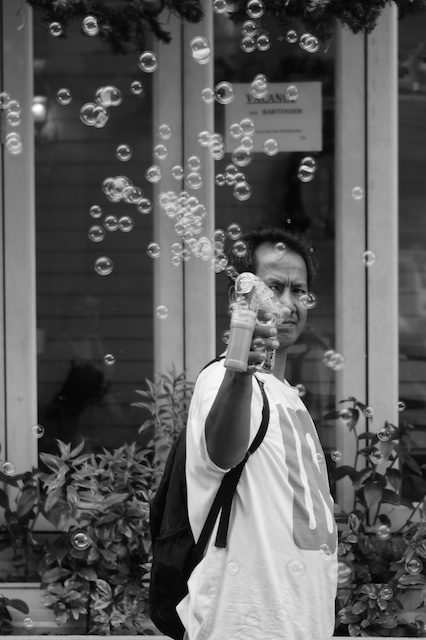 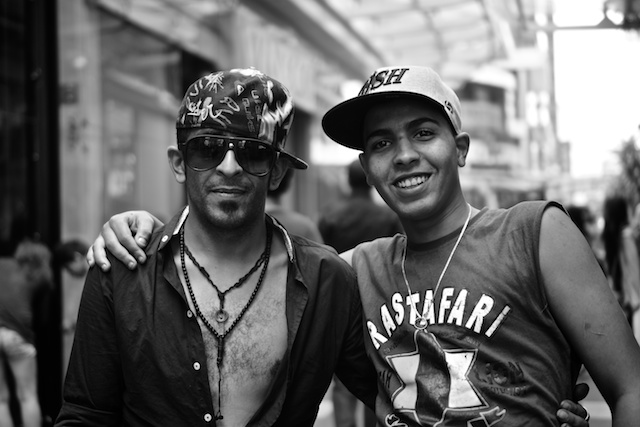 Far too much chest on display! They were almost asking for their portrait to be taken 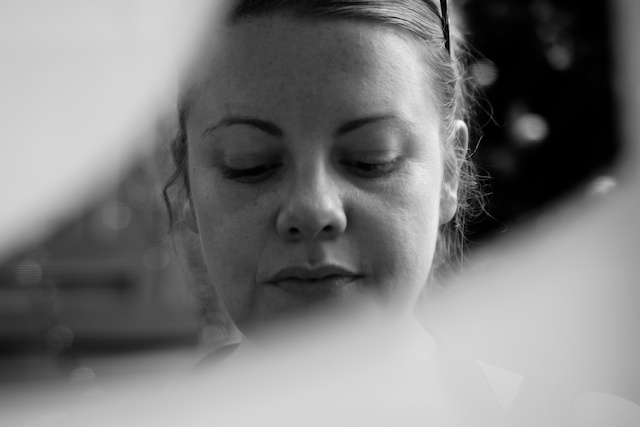 Self portrait taken outside the Pavilion Shopping Mall

The Pavilion Mall marked the official end of the walk but the outing was not quite over.  We crossed the road and headed into the Starhill Gallery Mall. We were going to the Leica shop where local street photographer Che’ Ahmad Azhar had an exhibition of his series ‘Walk of Life‘.  He has been featured in the New York Times and took these pictures over 8 years in just 3 streets in Kuala Lumpur. 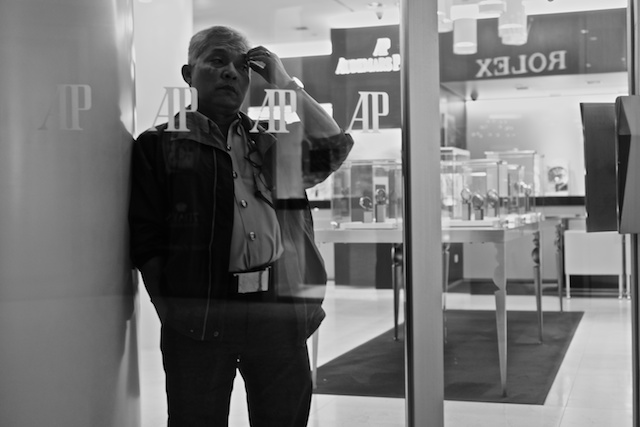 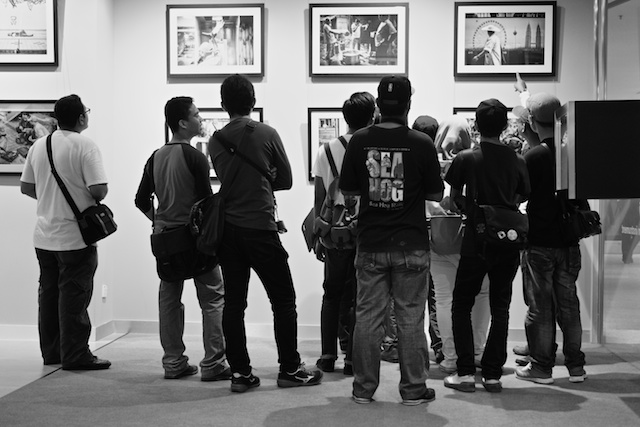 Checking out Che’ s work in the Leica Gallery 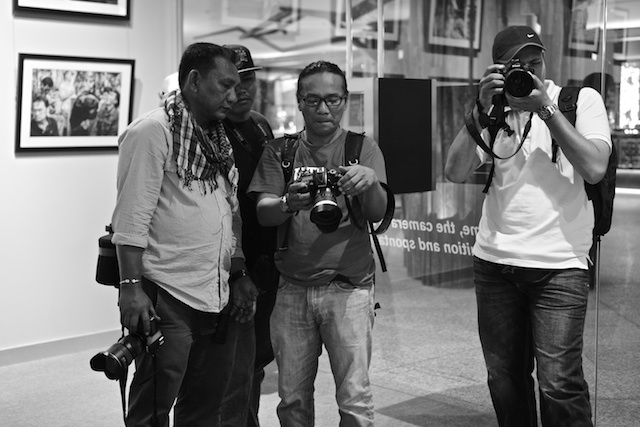 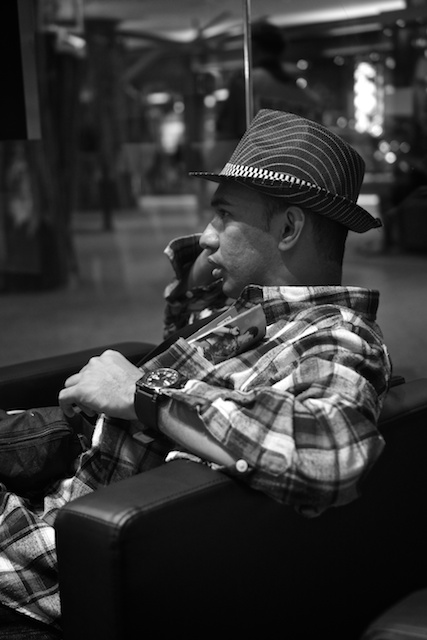 Taking a rest and a phone call

After the visit to the gallery it was time for the group shot. Here is a copy of the final version! 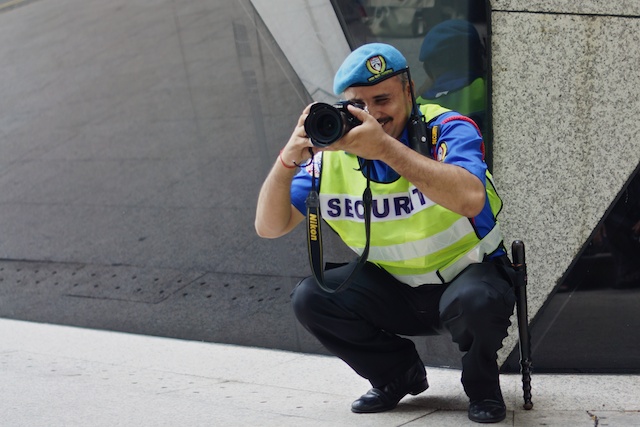 The security guard who took one of the group shots

We had a great time meeting the photographers of FJM and if we’re around we’ll certainly be joining their next walk. You can see some of the other photos taken on the walk on the Facebook Album here and see some of the group members “Best of 2013” collection on their Facebook page or their Flickr page.