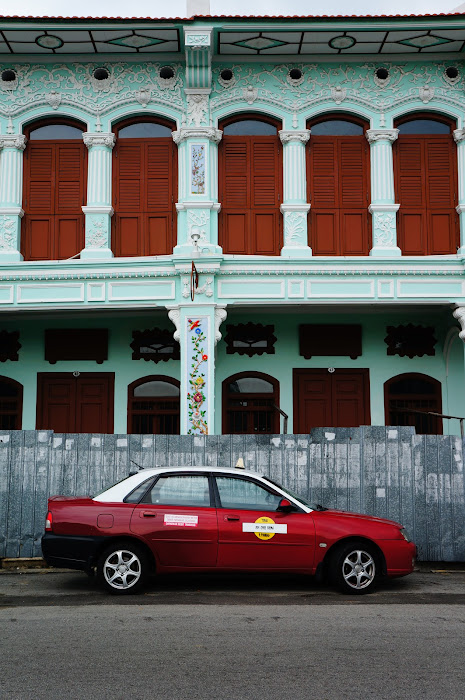 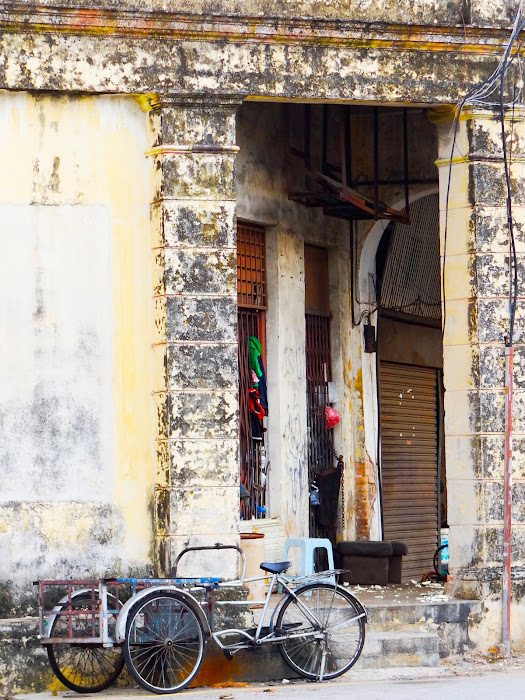 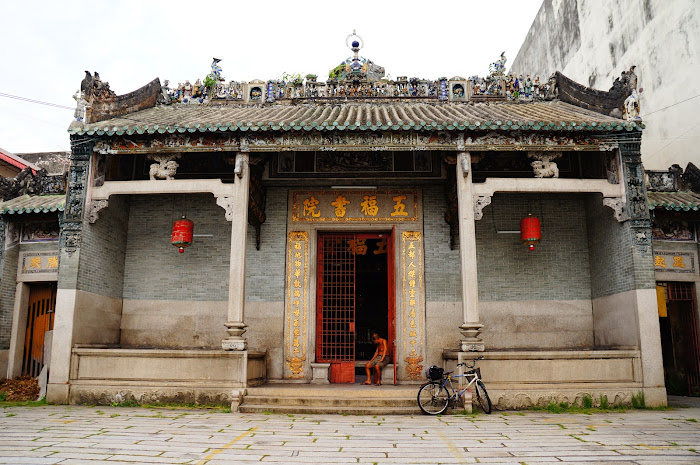 We headed up to Georgetown on another coach type bus with massive armchair like seats and freezing air con. Georgetown is the capital of Penang, most of which is on an island. Arriving by bus meant that we crossed the famous bridge on our way over to Penang island; the longest bridge in the whole of Asia. 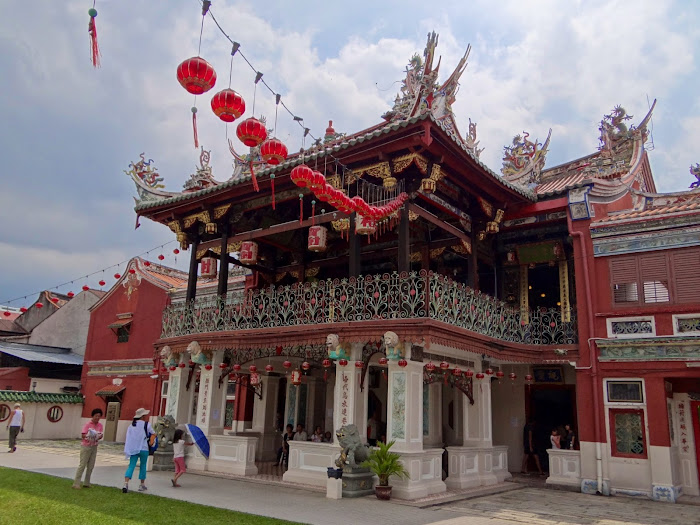 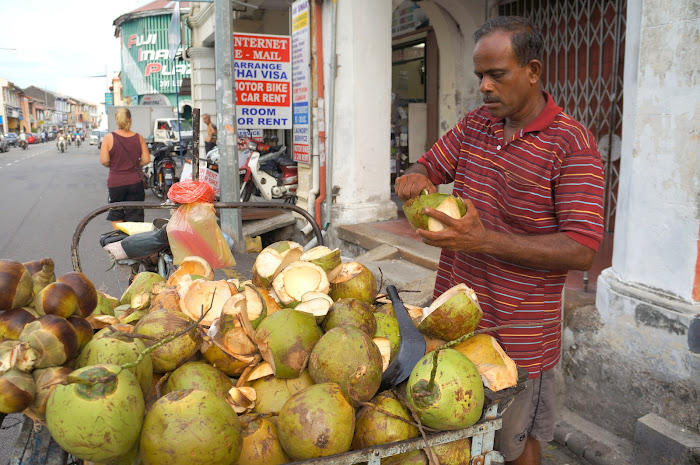 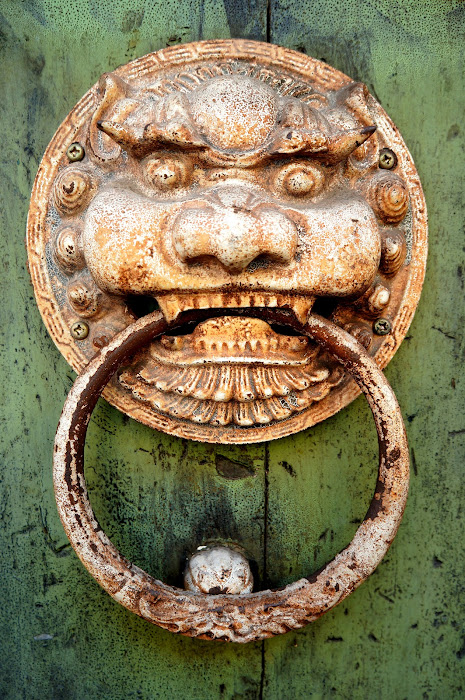 We found a cheap place to stay after looking at some options at quite a high price with no bathroom and just a desk fan. It was in a very old building and had quite a dodgy bathroom but the room was large (2 double beds) with air con so we were happy. It just so happened that we arrived in time for the annual festival, celebrating the anniversary of Georgetown becoming an UNESCO world heritage site. It is a weekend full of cultural activities which were mostly free and spread throughout the city, entertaining locals and tourists day and night for 3 days. 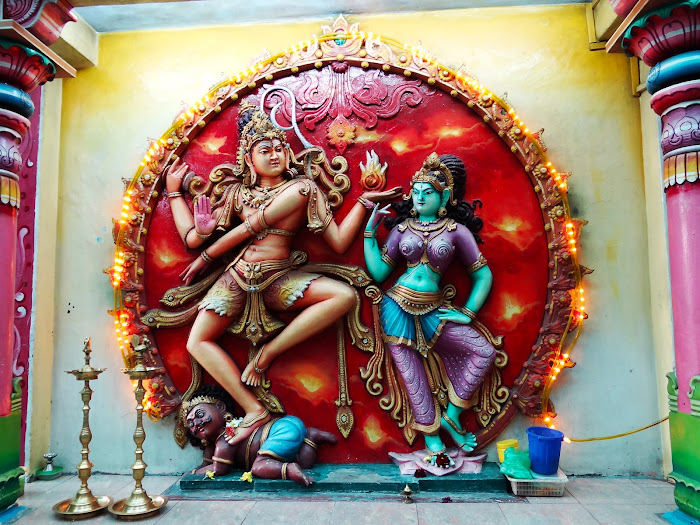 We spent our days wandering the city, looking at the old, crumbling buildings and taking in a temple or two and the evenings enjoying the street entertainment laid on by the city and eating. 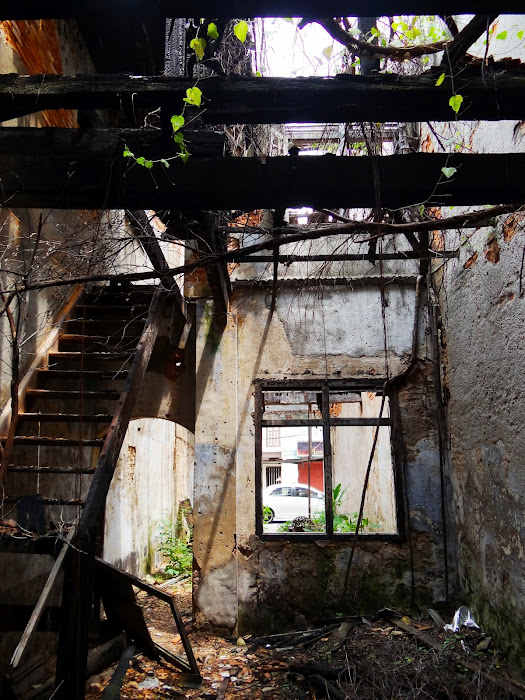 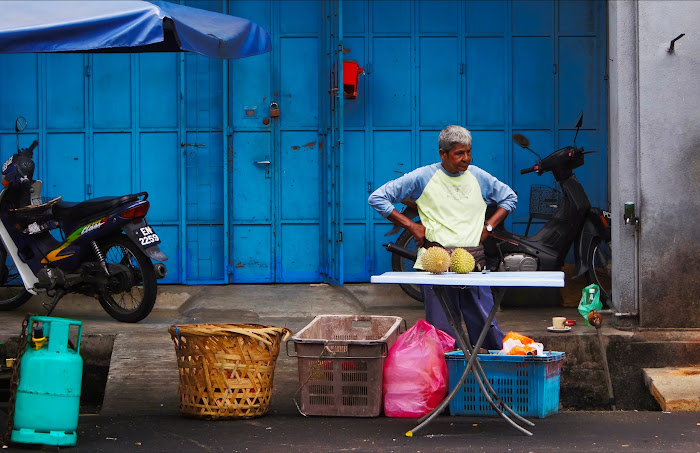 There were theatre and cinema events on the street, random pieces of art to stumble across, musical shows, snake charming, martial arts displays, lots of food and drink and more that I can't remember. 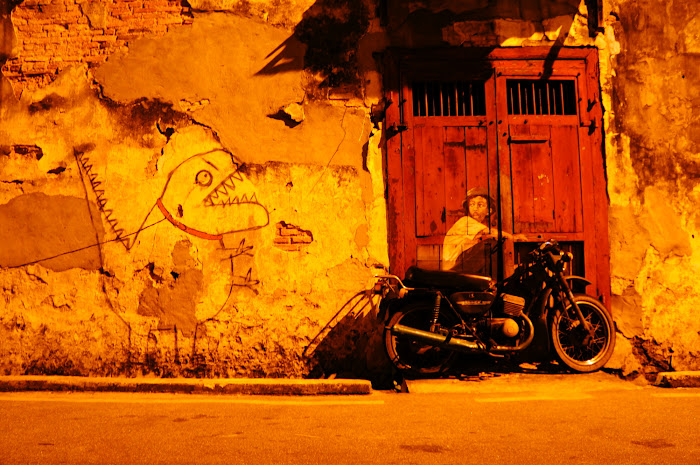 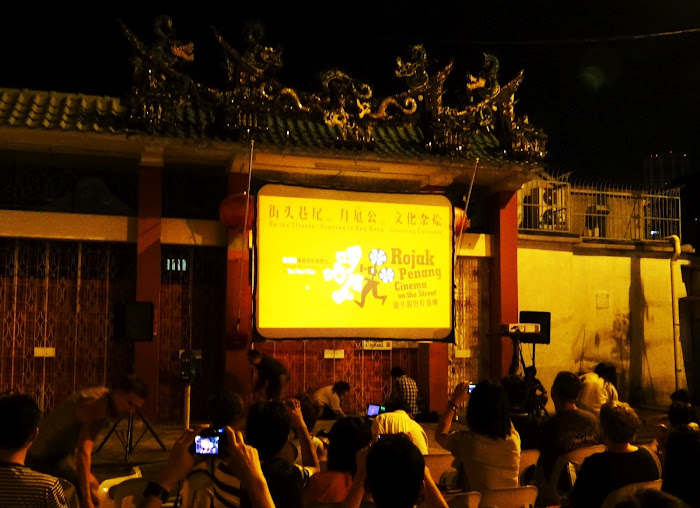 The two best areas were Chinatown and Little India. In Chinatown on the second evening of our visit there was a whole road of activities going on with things for sale (like this delicious satay – yum!) music and dance performances and the finale was a classic display of a lion dance and a dragon dance. They were very impressive to watch and the crowd lapped it up. 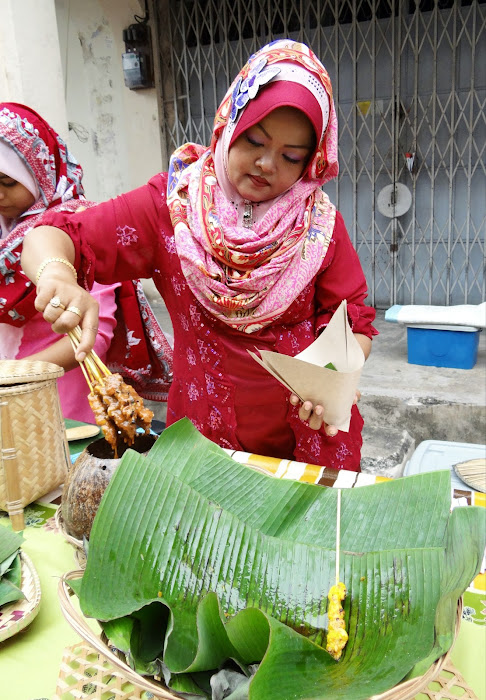 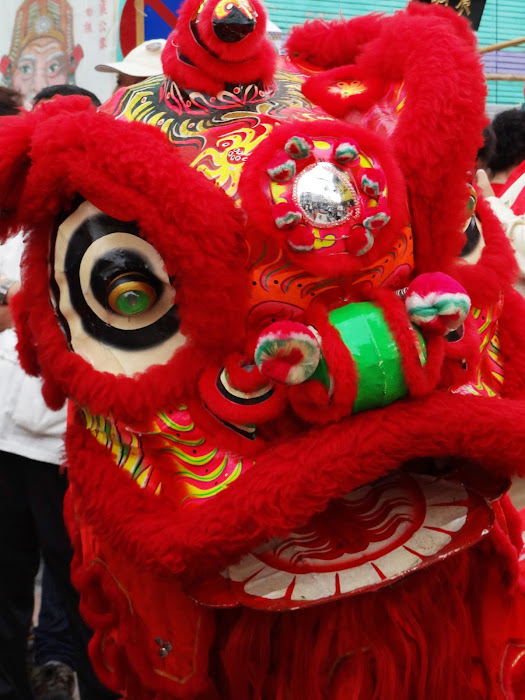 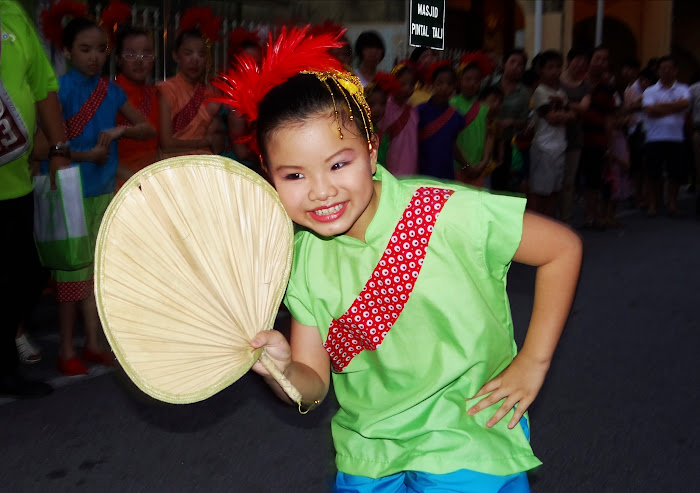 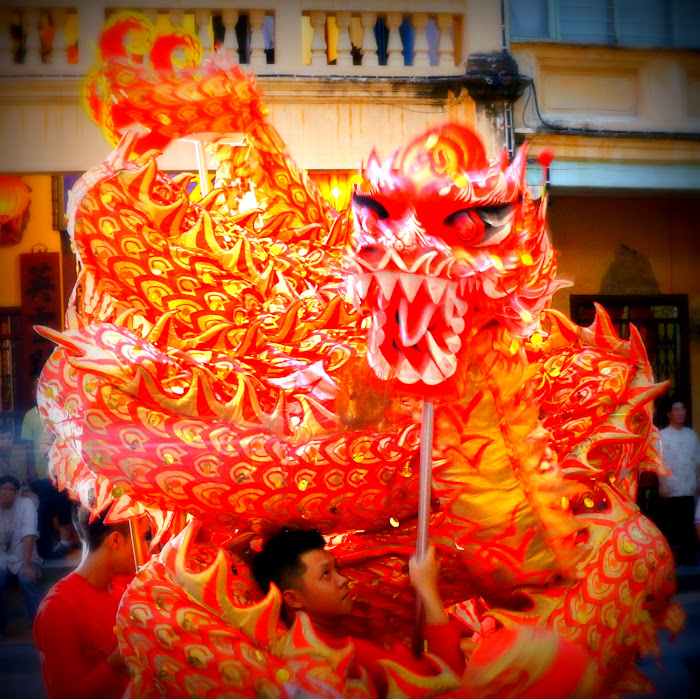 A few streets away the Indian community were not to be outdone and after a daytime programme of events which included an enourmous amount of free food cooked up for a feast (yum again) comedy shows etc there were also shows in the evening. However, each time we checked in the evening the programme of entertainment was running rather late so we did not quite get to see what we wanted. 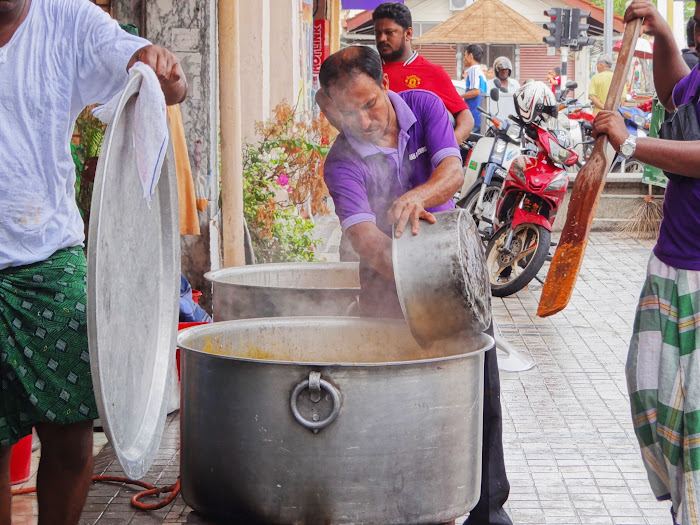 An unexpected sight we discoved in Georgetown was the group of clan jetties. This is where the city has been extended on stilts over the water and many people still live and work there. They have electricity and the like (some have satelite TV) and it all feels quite solid but I'm not sure how comfortable you would feel in a violent storm, some of these jetties extend for a few hundred yards or more. An interesting fact is they were built for people to avoid paying taxes due for living on land. 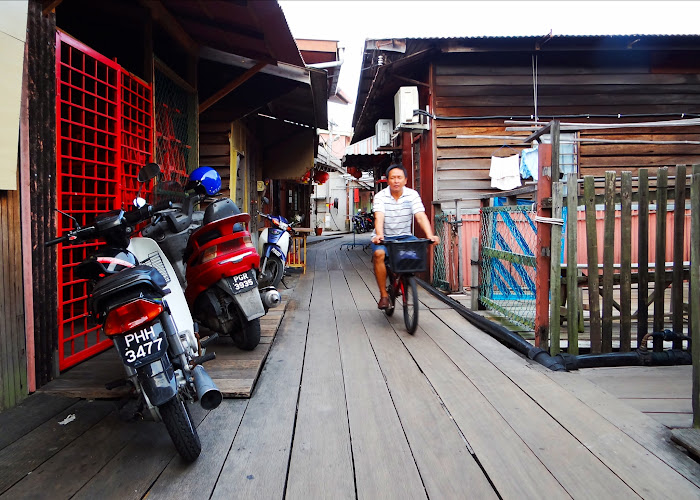 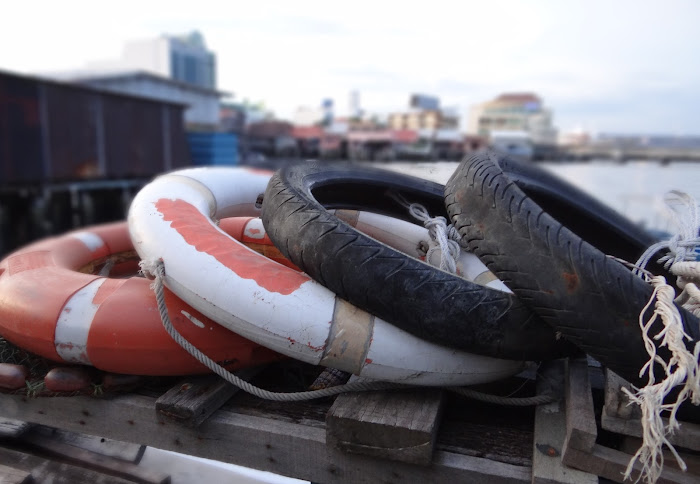 After the weekend in Georgetown we decided it was time for some beach action (well, I fancied some beach and Henry liked the idea of some peace and quiet to get some work done). We boarded a local bus and went just to the north of the island to a place called Batu Ferrenghi. After arriving there we discovered that the name translates to “foreigner's rock” as foreigners have been visiting there for many years; more recently as tourists but before that the ships used to stop there to refill their water supplies. (Trekkies out there may note the word is almost the same as that was used for the race in Star Trek, of which Quark was the main character.)
Sadly, topping up my tan was not to be as the rain started about an hour after we arrived. Again, it was torrential, true monsoon type rain that flooded the streets with lightening that made you wary of venturing out with an umbrella – let alone going in the water. It stopped for about half an hour in the evening and we popped out to get some food to find a place that looked a bit like Blackpool. Totally transformed from the daytime look it was indeed full of foreigners. The night market was full of fakes and the restaurants sold overpriced western food. We decided to leave the next day and had a quick look at the beach while we ate our breakfast before leaving. It was not that special, quite narrow and very full of water sport activities. I don't think there was a safe place to swim where you would not get attacked by a jet ski or banana boat.
We went back to Georgetown but before getting the ferry we decided to revisit the tower that had been shut for the weekend the last time we tried to go up it. The Komtar tower is the tallest building on the island. For the sum of £1 each we were whizzed to the 60th floor to the enclosed viewing platform. It was quite good really, this is what we could see… (you can just see one end of the longest bridge in Asia if you squint) 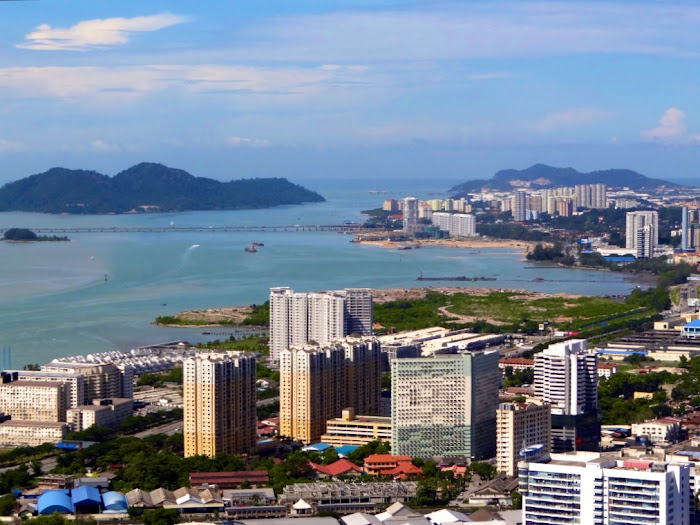 After the tower we made our way to the ferry terminal on the free bus which circulates the city (a good idea to help congestion) and onto the free ferry back to the mainland. (I'm not sure why the ferry is free for foot passengers – it only applies on the way off the island, not the other way). It took about 20 minutes and the ferry was like this:

Now, here is an example of what occasionally happens when you don't do a jot of research, turn up and just hope for the best…

Butterworth was not in any way in our plans other than as a place to change from ferry to train and head back down south. It is a bit of a ghost town, much smaller than Georgetown and with none of the history or character of the city across the water. We turned up at the train station only to find out that there was a grand total of 3 trains a day, and it was about 6 hours until the next one. Thus, we decided that staying the night was a better option than turning up at our next destination at 3am.

We stayed the night in a very good, cheap hotel and caught the train the next day. 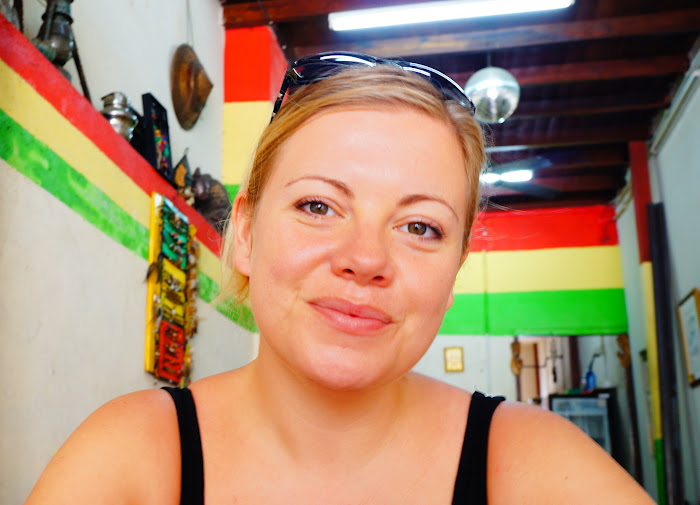 One thought on “Georgetown Festival 2012, Batu Ferrenghi and Butterworth, Penang”