A Very Slow Trip that We Perhaps Wouldn’t Have Taken…

Firstly, let me get it out of the way that the rail authorities of Thailand have closed part of the track between Bangkok and Chiang Mai, as of Monday 16th September 2013.  This has resulted in some services being cancelled altogether and a bus replacement service for the last 300 km of the trip for the trains still running.  For specific details see seat61.com.  It is due to re-open again at the end of October this year.  Our train was fine. Nothing as exciting as a derailment happened to us. I include the following details as an insight into the state of the rail infrastructure and the interesting cultural differences that exist in this case…

Why have they closed the line?

Because the trains kept coming off the tracks! There have been no less than 13 derailments on this stretch of track this year! As far as I can tell no one has been killed but dozens have been injured.  Here is a photo of a train derailed in a tunnel between Bangkok and Chiang Mai from Twitter user @hafreestone: 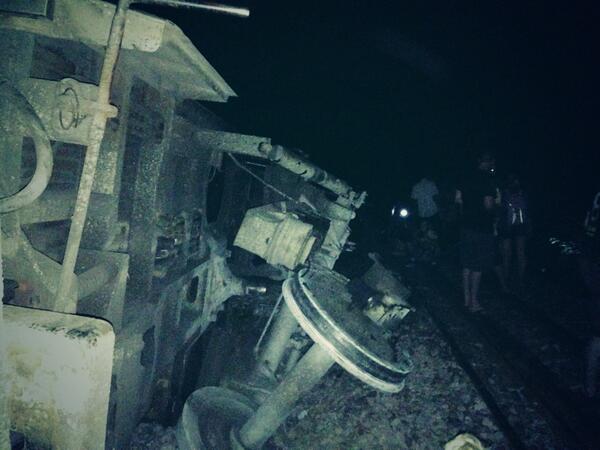 All in all there have been a startling  115* accidents on the Thai rail network so far this year.  It is good for future passengers that the old lines are finally being repaired but can you guess what the powers that be here blame the high accident rate on?  Spirits. Yes, unhappy ghosts have been causing the derailments.  According to the Daily News transport officials said:

“a painting at Hua Lamphong [Bangkok] depicted a small obstacle in the rail track, which perfectly explains the frequent derailments…”

Mr Prapat (the governor of the railways) said that the agency was looking for an artist to restore a 48-year-old painting at the SRT headquarters amid rumours that the damaged artwork was a bad omen that had caused accidents.

Those pesky spirits! (Image courtesy of the Bangkok Post)

The spirits have not only been blamed for the frequent cases of trains jumping off their tracks but also for the spate of road and boat accidents. Perhaps the most high profile example of their “mischief” was the Thai Airways flight that skidded off the runway a few weeks ago. Although it has since been identified that the landing gear was to blame for this incident it seems to have fuelled the belief that the spirits that haunt Bangkok’s Suvarnabhumi Airport were behind the incident. 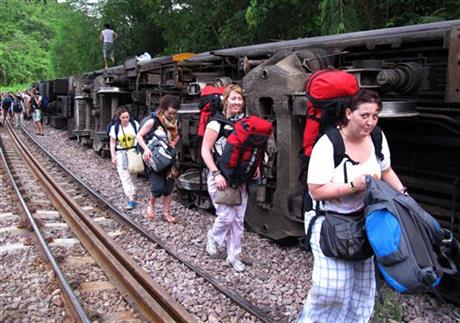 This could have been us! (Although we would have be carrying much less stuff of course) Image from AP.

What is interesting to the outsider in looking at this is that it is not one lone voice of a person with strong beliefs making these claims.  They are important, high ranking, people. This is from the website meebal.com:

“According to Thai Airways Managing Director, Mr. Sorajak Kasevsuvn, he feels that the accident might be due to ‘bad spirits’ on the runway and he’s not taking any chances.  Mr. Kasevsuvn has ordered a major ceremony to take place in order to appease the malevolent spirits; that many believe plague the airport. Thai Airways managing director is not alone in his assumption that bad spirits are causing problems; indeed the former Airports Authority of Thailand (AOT) director Mr. Chotisak Asapaviriya also told Thai Rath newspaper that he himself had held a number of prayer sessions with monks in order to rid the Suvarnabhumi Airport of its bad spirits; to no avail. This might all seem bizarre but during an interview Mr. Chotisak Asapaviriya also confessed that one official, during one of the ceremonies, had broken down in a trance; it was later claimed that he had been taken over by a ghost who demanded that an expensive shrine was quickly erected in order to avert future problems. Since the construction of Suvarnabhumi Airport no less than 8 shrines have been built around the airport in order to ward off evil or unhappy spirits. The shrines are in addition to the condominium block that was specifically built for the spirits to live in order to give them somewhere to live and keep them from getting angry.”

So, all explained then.  The result is that we were some of the last people to travel on these rotting lines and narrowly escape potential injury and massive delays.  How was our journey?

*The figure had to be revised up while I was writing this blog post! 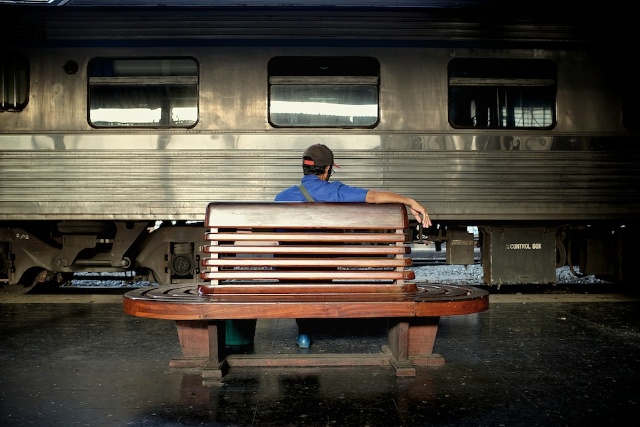 We left the hotel at about 1pm and took a slow walk down to Hua Lamphong station.  We had a pleasant afternoon hanging around the station, eventually seating ourselves in one of the upstairs restaurants where we could (for a small charge) plug ourselves into power so we didn’t start the journey with empty batteries. 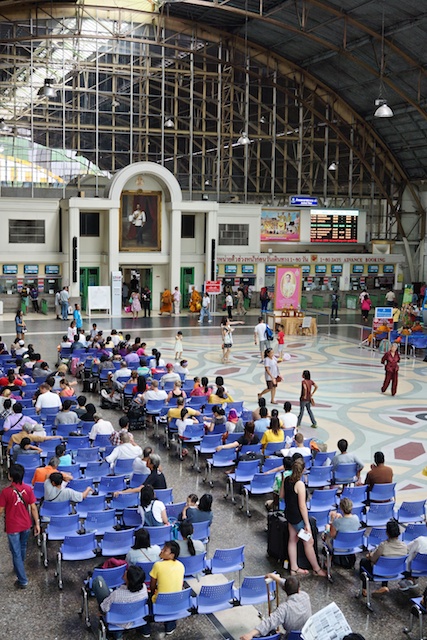 View of the main waiting area

We’d missed out on first class tickets again. This time it was due to the impending start of Vassa – or Buddhist Lent.  Vassa is a 3 month period when monks cannot move from temple to temple and all good Buddhists should refrain from smoking, drinking and eating meat. We were travelling on the day before it started and although we saw no evidence of anything special going on other than the fact that there was no alcohol on sale anywhere for 2 days (a government initiative) it did, apparently, impact on passenger numbers. 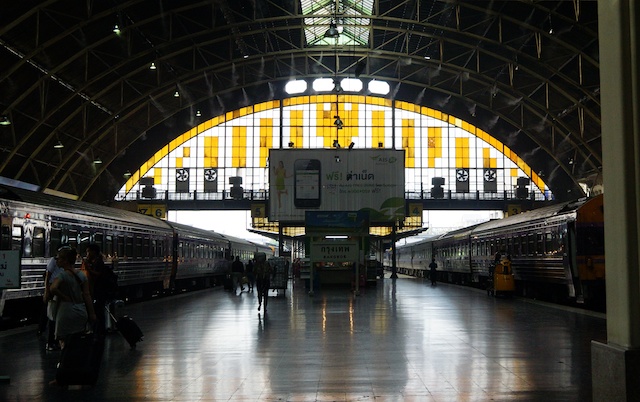 So, after hanging around, eating some lovely asparagus (me) and some very garlicky chicken (Henry), drinking coffee, buying snacks and water for the journey and catching up on our emails using our new SIM cards to make a hotspot, it was eventually time t0 board. As you can see from the photo Bangkok’s main station does have that grand ‘big station’ feeling. Our train (on the left) was very long indeed but there were plenty of staff members to direct passengers to the correct carriage. 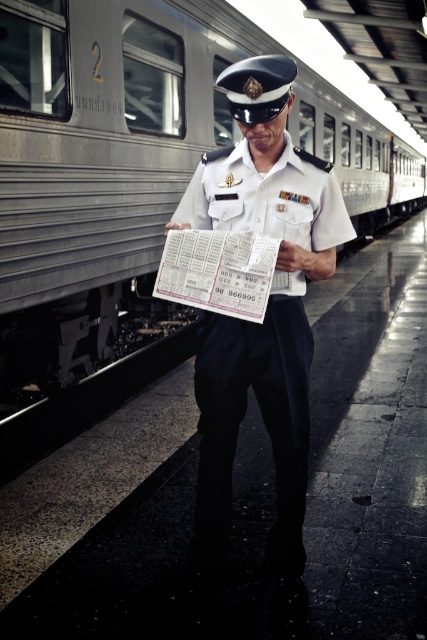 The train was due to depart at 6.10pm so it was still in daytime mode. We found our seat and were ridiculously happy that we were right next to the only power socket in the carriage! Wooop! 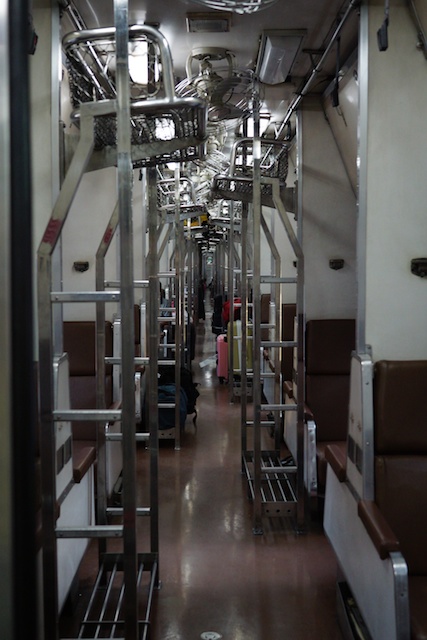 The food arrangement were similar to the last train we’d taken, with most people ordering from the staff who then brought it to their seats.  We went for the restaurant car again and this time we had an actual tablecloth – imagine that! Here is the menu we had to choose from: 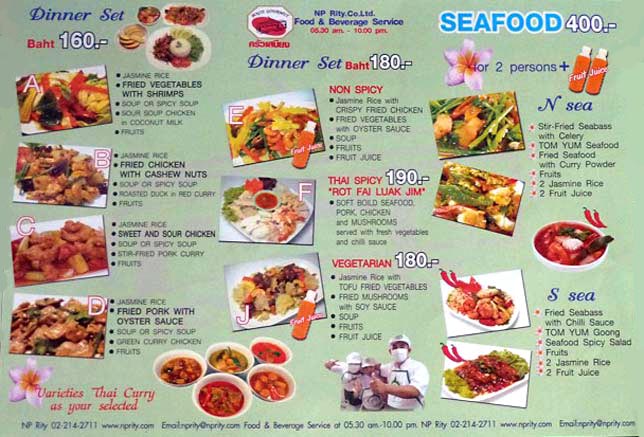 We both went for set C. (160 Baht works out at £3.20) It was served piping hot and with proper cutlery. It tasted pretty good and looked like this: 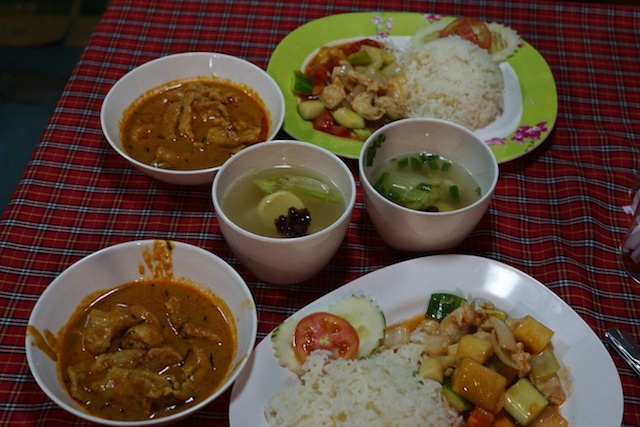 (We did get the fruit, some cut up papaya, a bit later)

What this photo does not capture is the alarming sway that us, the table and the food were possessed by for the entire meal.  In fact, the level of swaying we encountered at this early stage of the journey was really quite minor! It got much worse. After dinner we retired to our beds which had been magically made up in our absence.  Lovely. Henry braved the top bunk this time and took the eye mask and I settled down in the spacious lower bunk.  We passed a few hours as before – I watched a film (period drama that Henry would not like) and he played a game on his phone.  All the while we were being rocked about like nobody’s business. Our previous overnight train journey only a few days prior had left me scared of being cold again.  When you only have hand luggage there is no room for hoodies and hats (both of which I’d have dearly loved on the last freezing train) and I’d been contemplating getting warm stuff for this journey.  Well, I’m very glad I didn’t.  This time I was so hot it was ridiculous!  The curtains on the lower bunks do an excellent job of keeping out the bright lights but they also keep in the heat.  And just how undressed can one get with only a little curtain between you and the world? 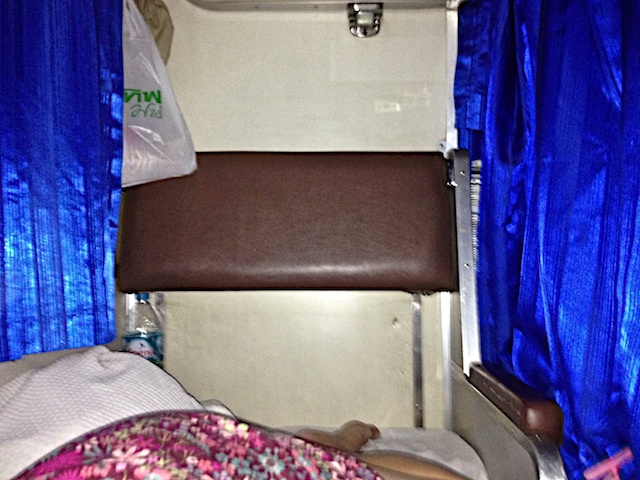 Inside my hot bunk – you can just see the pink peg in the bottom right holding up the curtain a little.

I partially solved this by rolling up some of the curtains and using my trusty Indian pegs to keep an gap and maintain air flow.  With the worsening rocking (I’ve travelled by train in many countries and never experienced anything like it) and the heat it was hard to fall asleep. In the end we took a sleeping tablet. I’m glad we had them. We both slept a little, eventually, but it was not a pleasant night. It is hard to describe the rocking motion. The swaying was like a slow metronome, or being shaking like a cocktail in extra slow motion; not gentle enough to rock you to sleep, thats for sure! The rain was not going very fast at all. According to my rudimentary calculations we averaged about 30 mph the whole way,  and this was on the express train! I reckon we could have jumped off (like you see people do in films) and landed safely on the lush grassy bank with only minor injuries. We were up by about 6am and went in search of coffee, returning to the restaurant car.  The motion of the carriages by this point was so alarming that it was safer to hold one’s coffee than leave it to the mercy of the table until it was at least half empty. 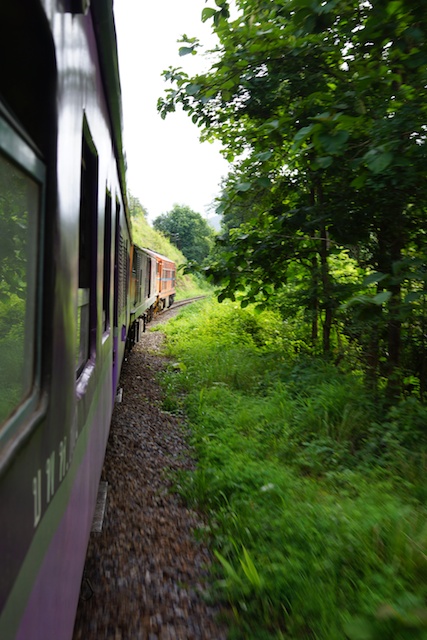 The rest of the journey passed with nothing more eventful happening than us eating a couple of biscuits we had left and finishing off our litre of water.  I went to take some photos of the ‘stunning scenery’ but every time I actually got to the door with my camera I seemed to have missed the ‘stunning’ parts. 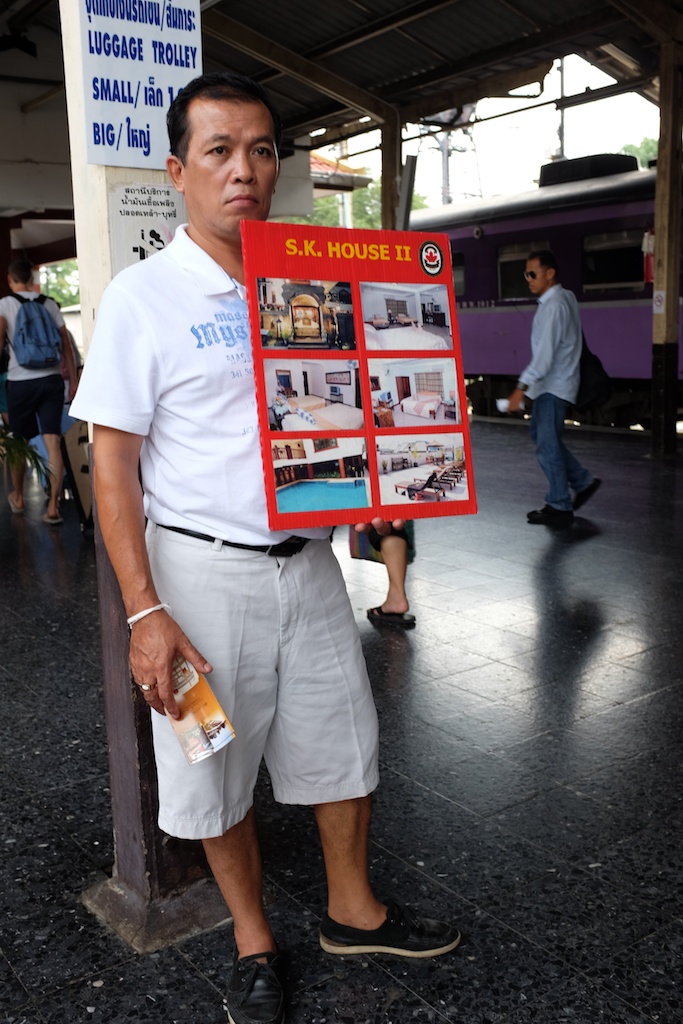 We were delivered safely to Chiang Mai and arrived at the station to find plenty of taxi drivers, guesthouse and hotel reps and tuk-tuks all waiting to pounce on the bunch of freshly shaken tourists.  We made our way outside and haggled admirably for a ride into town where we had breakfast, found a cheap room and promptly went to sleep.  The end.

2 thoughts on “The Bangkok to Chiang Mai Train; Track Closure, Derailments, and Spirits”