We Enter The Headquarters Of A Amma’s Global Network

Well, where to start when writing about the ashram we visited yesterday? I’ll start from the top. As we approached the ferry stop the staff on board were careful to point out (although you could not really miss) the enormous pink tower blocks that make up the majority of the buildings in the Ashram. They were over the other side of a large bridge so we trudged with our bags and Mark, an Irish traveller who was the only other person alighting at the same stop as us, up and down the bridge towards the large complex. 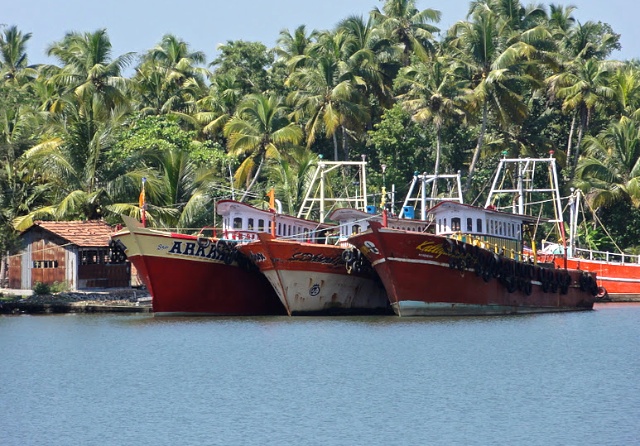 Taken from the ferry

No one welcomed us and we wandered in and went to 3 different booths to try and find out some information about where to go and what to do. After an initial scope out of the grounds where we saw lots of people eating lunch served from pots big enough to hold 2 people inside we found out the the accommodation office opened about 20 minutes later and we would pay 3 euros each to stay the night. We settled down to wait and Mark went off and signed himself up for 2 hours of washing up.

At this point we really did not know what to make of it all. The people who live there seemed to be wandering around quite aimlessly, perhaps in circles, and no one took the slightest bit of notice of the two new people waiting with their bags under a tree.

When we first got off the ferry we had seen quite a large group of school children of secondary age all in uniform and had assumed it was some sort of school trip, however, once inside we saw perhaps hundreds of them all with an ID badge and under no supervision – they were attending school here!  The rest of the population was made up of quite a large proportion of white people, many of whom were over 40 and the rest were from all over the world. Many people were wearing a sort of all white uniform which we found out later was one of the many things you could buy on site. No one looked very happy, even though, by chance, the Hugging Mother was in fact in residence at the ashram, having just returned from America.

There are many rules to obey, some expected ones like modest dress and quite voices and some quite unexpected like having to be inside the gates by 6.30pm because of the “dangers” outside the gate and lights out in the entire place at 8pm! Also, no photography at all allowed (hence the lack of photographic evidence.)

We had taken in the sights and sounds around us and still felt quite unsure about staying the night. Part of us wanted to give it a go and see what happened but another felt really wary of this strange environment.  We decided we needed more information before making a decision about staying. Meanwhile, Mark had signed in and gone off to do his washing up duties.

A couple of young French girls arrived and we chatted to them about their plans. They had just flown from Paris to Trivandrum and then taken a 2 hour taxi ride to get there. One was planning on staying for 1 month and the other for 2. They had decided to come on the strength of feeling generated from meeting the guru in Paris and having a hug with her.  They said we should stay for a few weeks and we would feel the same devotion to her as they did and our world would be opened up to a ‘whole new level of love’. Well, we’re both pretty cynical when it comes to that sort of thing and this was not a convincer. They went to check in and we continued to sit under our tree.

We decided that I should go on an investigatory mission so I left Henry with the bags and went to explore.  I found lots of places to buy things: a wide array of items featuring the guru, juices, coffee, milkshakes etc, subscriptions to her magazine, radios pre-tuned to her radio station, clothes and shoes and an Internet cafe. Every single member of staff there is volunteering – to stay you have to do 2 hours work per day. Around the back of the complex I found a massive building project going on – she is obviously expanding her empire.
Anyway, on this little exploring mission I decided to do an experiment. It started with nods of acknowledgement to strangers, sometimes with a little smile. I got very few nods in response and no smiles. Then , I upped the anti and beamed at most people I saw. Not one person smiled back. When I returned and reported this to Henry we made our decision, picked up our stuff and walked out of the gates.

While walking away, back over the bridge, we saw massive adverts we had missed on the way in for her range of 164 Aryvedic products which are available on the mass market.  All in all here is our verdict: it is a cult. A massive cult that makes millions and turns people into zombie like creatures who cannot even return a stranger’s smile.

View from the bridge, the Ashram is on the left of the picture

(By the time of publishing we learnt that all the products in her range are produced there too, factory style, with no one being paid anything for their efforts.) You can see her website here.

We ended up that evening in a town called Karungappalli. We had a lovely room in what could have been the smartest hotel in town. The man on reception and the bellboy were very excited to tell us that Mr Universe himself had our room for 3 days before us. We looked at all the pictures on their phones and were suitably impressed for their satisfaction.  Hungry from the ashram excitement, we ate at the hotel restaurant and were very disappointed. It was dirty and we had to wait a long time for Henry’s food, then another 15 minutes for a stale sandwich for me, then another 10 for some undercooked French fries. There were 10 serving staff in the restaurant watching cricket the whole time we were there. 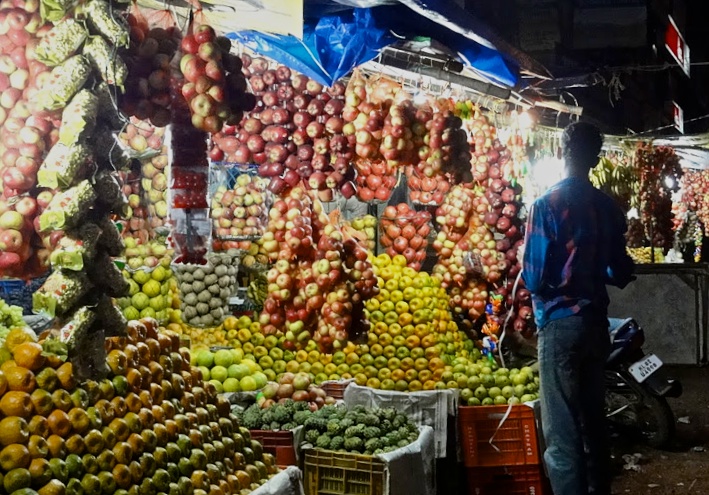 The hotel staff said that there was nothing for us to see in the town at all but we went on an evening wander anyway. We had a first try of some street food which was all good and did us no harm and wandered up and down the main street looking at the vast array of shops we have found in every single town and city we have visited. I would say that Karungappalli is a good place to go and escape from the ashram but not a tourist must-see destination.
Tagged with: Amma, Amritipuri, Ashram, backwaters, cult, ferry, Hugging Mother, Karungappalli, Mr Universe, weird