Vientiane to Bangkok on the Overnight Sleeper

Train 70: Journey Report and the Failures of Yortdoy Services

It was without any trace of heavy hearts that we packed up and prepared for our overnight journey from Vientiane to Bangkok. We were not sad to be leaving and were, in fact, excited about our journey on the overnight sleeper to Bangkok.

Crossing the border from Laos on the left of the Mekong to Thailand on the right – the first second stretch of our journey.

There are overnight coach and minibus services we could have booked but having read some horror stories about drivers falling asleep at the wheel we decided the train was the safer option.  It would involve an hour or so in the minibus to the border, a quick shuttle over the border (the Mekong River) and then an overnight sleeper all the way to Bangkok. (Train information for the world over can be reliably gathered from Seat61.com.) We’d not really spent much on sightseeing and ‘doing stuff’ in Vientiane (it cost enough just to eat!) so we’d decided to treat ourselves to a first class cabin (at about £25 each).  We were to have our own private room, with a sink, a power socket and everything!  Sadly, it was not to be.

Three days prior to departure we’d booked and paid a small agency near our hotel for our tickets (we were not able to book it ourselves) they had looked online and they’d dutifully checked availability and given us a receipt to exchange for our tickets on the day.  The minibus had picked us and a few other tourists up before we pulled up outside another agency.  A woman came out to speak to us. She explained that there were no first class tickets left and that we’d been booked into second class.  I was not happy.

She was not in the least bit apologetic. The word “sorry” did not pass her lips once. She just said there was no space left. She could not explain why we had not been informed about this in the three days since we’d booked it (they had our hotel details and phone number) or, when they had tried to get the tickets (they were certainly available when we paid the other agency) she could only offer a refund of the difference between the first and second class tickets. Even the support of the other tourists chiming in failed to get a more significant discount. We asked about the following day, still nothing available. After that we would incur further additional costs because we would have to start paying fines for overstaying our visas. That was it then, our first class overnight sleeper treat was off. I received the money somewhat ungraciously I fear (about £20)  and felt quite hard done by while we drove around and around the town picking up more travellers for the next hour or so.  (The agency who messed up was Yortdoy Service – you have been warned.) 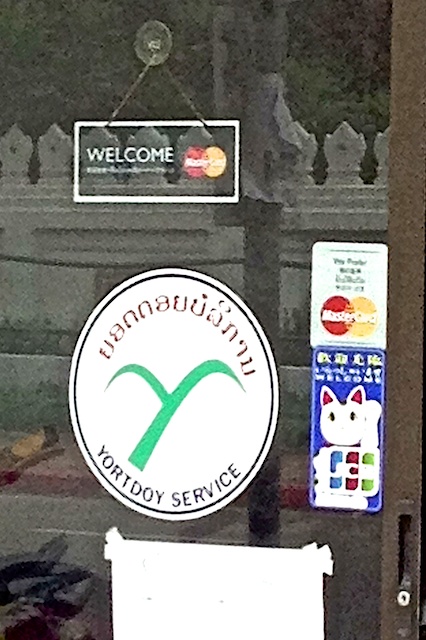 So, once the mini-bus was full to bursting we headed out of town to the mini train station near the border, about 13km from Vientiane. Then there was another example of the failures of Yortdoy’s services.  We got ourselves out and the two girls I’d been sat next to were looking confused.  It turned out they were not supposed to be getting a train at all. They had booked tickets on an overnight bus and were supposed to have been dropped at the station!  The driver was ready to leave them there, without tickets, until they insisted he phoned the office.  I think they’d missed that connection by then and ended up on the train too! (Again this was the fault of Yortdoy Service)

As we’d been chatting to the two stranded girls the area had cleared and we needed to hurry. We had our passports ready with shiny new Thai visas that I’d picked up from the consulate the day before and before we were allowed to be stamped out we had to pay a fee! Now, I knew there was no fee (departure tax) payable when you exit by land but there the man was, in uniform, in his own booth, ready to take the money. We had to pay – there was not time to argue. It wasn’t much, first demanded in Kip (10,000), then Baht (40) (82p).  Corruption in action.  I paid, got stamped out and shuffled over to the driver to finally collect our train tickets.

After the hoo-ha in the minibus I was ready to check these tickets carefully. I’m glad I did. The first set were fine, but we would only be on the shuttle train for 10 minutes or so, the problem was with the overnight tickets. Our original plan of a first class cabin had been reduced to second class berths that were now nowhere near each other! I was not having it!  I made a fuss. I resisted the issue being whitewashed over by the driver who was trying to guide me onto the train and the man who worked at the station who was trying to say they were “near, near!”  Henry joined me from the passport queue and he could see I was in full swing. They tried to hustle us onto the train. I would not move.  Eventually they both went off onto the train presumably to swap one of our tickets with another couples to make two matching upper/lower pairs of tickets. They came back with a suitable pair eventually and at that point we finally boarded. I think they were relieved to be rid of me.  Looking back on this I’m sure we could have sorted the mix up out with those other ticket holders ourselves but I was determined the staff should sort it after the mess the company had made so far. (Just another reminder: Yortdoy was the company who messed up, again.) 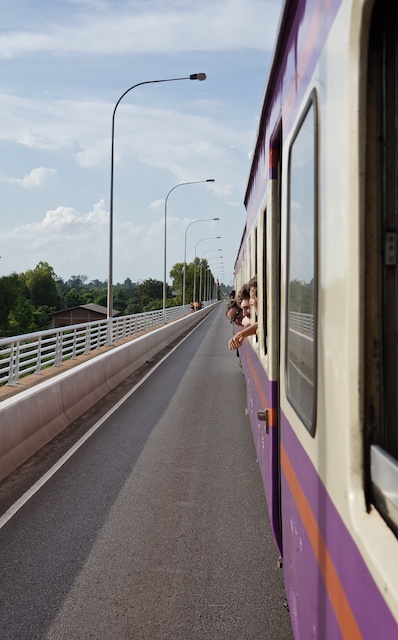 Looking back towards Laos on the Friendship bridge 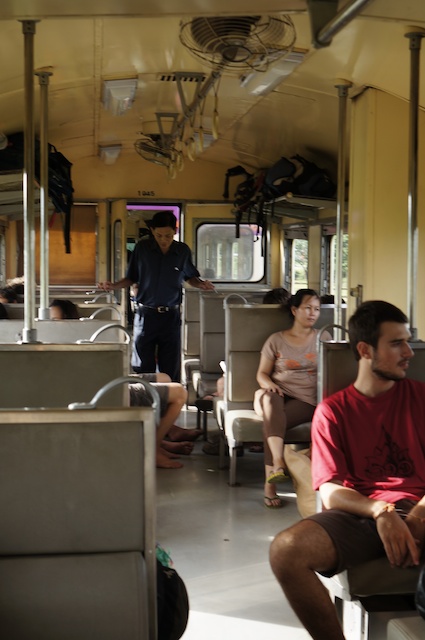 Inside the shuttle train

So, the first quick train journey was over in no time. It really is a shuttle train that takes you from the tiny Thanaleng station on the Laos side, over the Thai-Laos Friendship Bridge to Nong Khai in Thailand.  The bridge usually acts as a road but the cars are stopped and the train runs down the middle of it when it is the train’s turn. As we had been stamped out of Laos and were yet to be stamped into Thailand I suppose we were in no country at all for those 15 minutes or so.  We arrived before we had even finished filling in our entry forms for Thailand. We queued up, got stamped into Thailand (without a mention of having any onward journey booked, which we didn’t) and settled in to wait the hour or so before the train was due to depart. 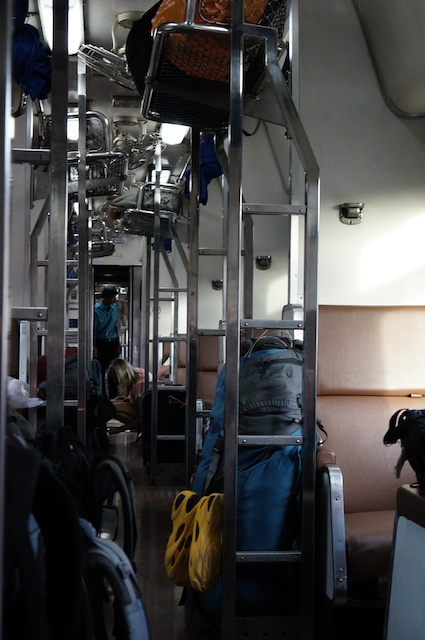 Oh, how our backpacks were dwarfed by the others around!

After not very long we were bored of waiting in the uninteresting station and took our places on the train early and were pleasantly surprised by the second class cabins. As it was only due to leave at 6.20pm it was still in ‘daytime’ mode. We were soon on our way and started to feel peckish.  We went to explore and found our way into the restaurant car.  Not many people were actually eating. We’d seen many people having food delivered to their seats after ordering it with one of the staff shortly after getting onboard, I suppose thats why most of the people in there were drinking and smoking. 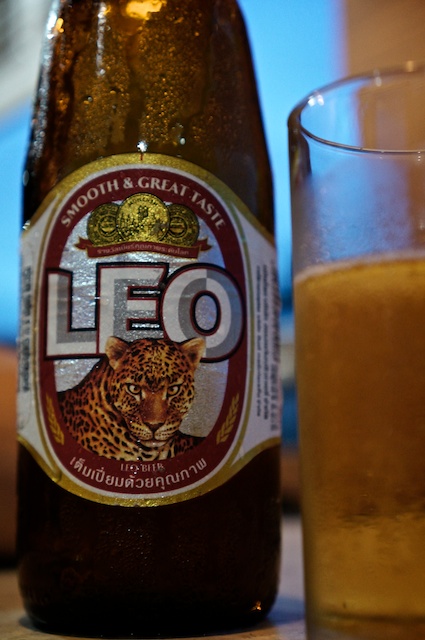 Our hot dinner went down a treat, accompanied by a bottle of beer to share and we were soon back at our seats.  After having declined the offer to have the beds made up at about 7pm, which we felt was a bit early, we had to wait until about 8.30 for the next opportunity.  We were more than ready for it then and excitedly got ourselves in bed-time mode.  Having never slept on a train before Henry was slightly concerned about falling out of the top berth so I took that.  The top berth is cheaper because it is less wide and less roomy all round. I didn’t mind – I’ve spent many a night on trains in Europe quite a few years ago and remembered them fondly. If you are very tall you may have some problems with the length but being much nearer the average Asian height than European one neither of us had any issue there. 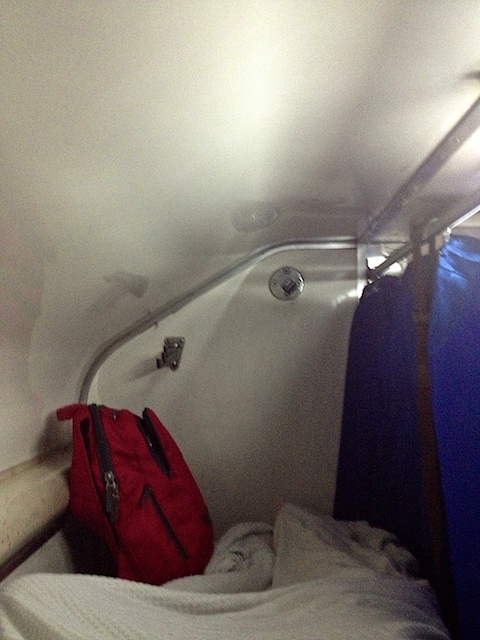 My upper berth was long enough for me (I kept the red bag with me as it had my laptop, camera etc in.. Henry kept his whole bag inside his berth) 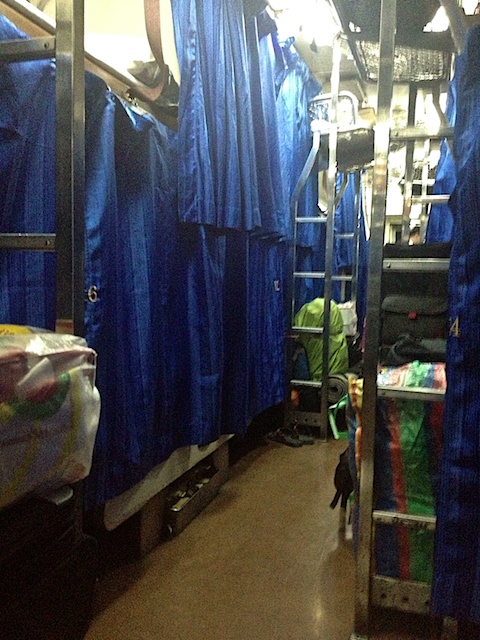 Tucked up for the night

We spent the next couple of hours in our little berths, behind the curtains.  I watched a film on the laptop and Henry played games on his phone. Although we had a mattress and (freshly laundered) sheet, pillow and blanket I was cold.  The air-con was very effective and was located in the roof of the carriage – about a foot or so from my head.   By the time Henry had gone to sleep in the lower berth (he was not cold at all) I had put on all my clothes and was still cold. The train was completely silent (apart from the usual reassuring train noises of course) I felt I was the only one awake when I went to look for another blanket at about midnight.  I found some staff by the toilets and (after being shushed quite a few times for speaking too loudly) begged another blanket from them. Once I had that, and my scarf wrapped around my head in lieu of a hat and my eyemask on to block out the glare of the bright light I finally must have fallen asleep about 1am. 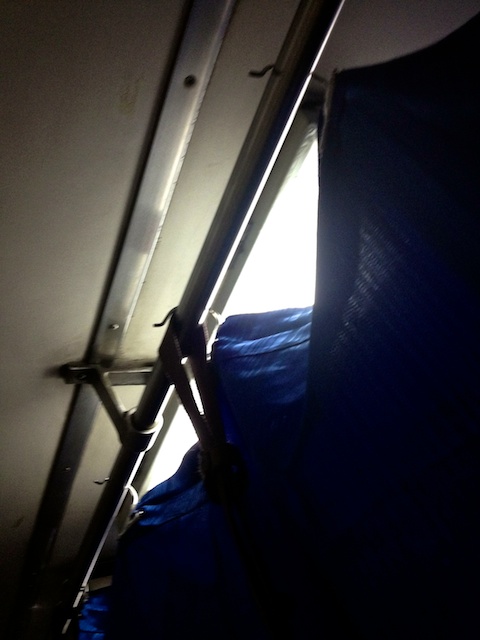 Once I was warmed up it was just as relaxing as I remembered sleeping on a train. It wasn’t until about 5.30am that the man came around to wake us and by that time we were crawling through the northern suburbs of Bangkok. 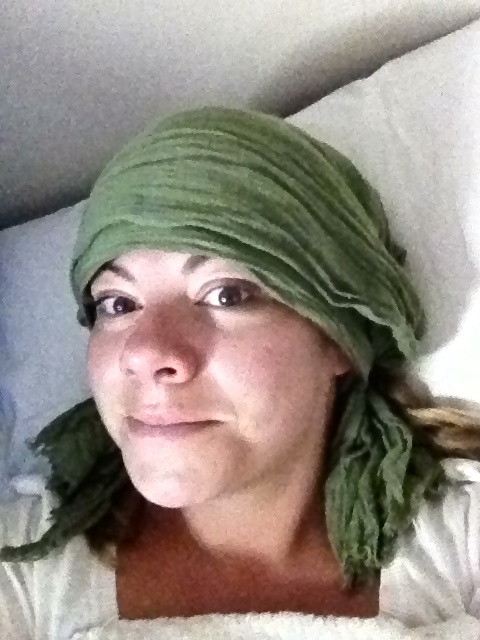 Makeshift hat still keeping me warm at 5.30am

Arriving at Hualalamphong station we decided to let our memory guide us. Having spent a few months in Bangkok last year we were confident enough to shun the taxis and tuk tuks and walked the 1 kilometer or so to Chinatown with the hope that one of our old favourite hotels would be able to accommodate us at that early hour of the morning. Between us we managed the route perfectly and were checked in without a fuss, ready for a few days in brilliant Bangkok which I’ll elaborate on in my next post. 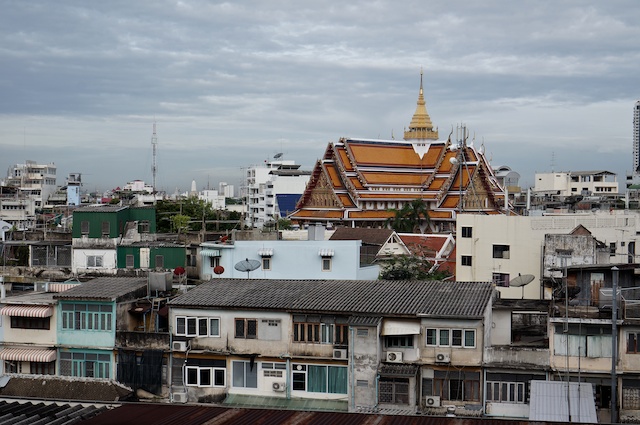 Have you ever travelled on the overnight sleeper from Vientiane to Bangkok?  How did you find it?

9 thoughts on “Vientiane to Bangkok on the Overnight Sleeper”