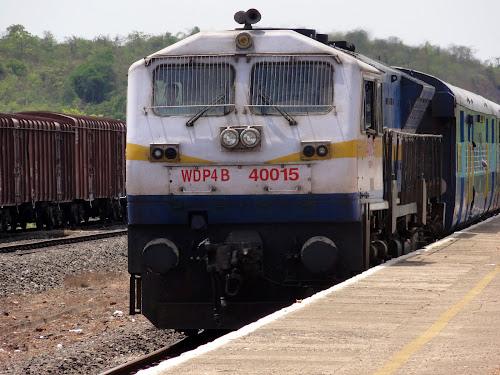 We have left the quiet village of Arambol and are headed for Mumbai CST, the busiest train stain in the whole of Asia! 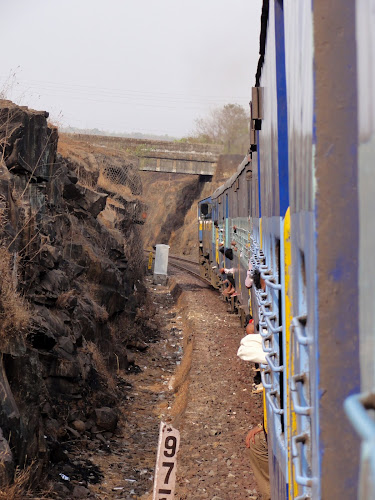 I decided with 11 hours to kill that I should not only finish the post for Arambol but document our journey to Mumbai. We are travelling first class, or ‘1 A/C’ which was not our first choice but we left it too late for any other option. The trains here can be booked months in advance so the cheaper journeys were totally booked up for weeks and weeks. Our tickets were an expensive Rs2000 each (£23.40) but when you read about what we have and compare that to the UK it is quite impressive. So, we find ourselves on an enormous train with just half a carriage of 1 A/C. On the other occasion that we travelled first class we were in a four person compartment and luckily had it to ourselves. This time we have it even better – there are just 2.5 1 A/C compartments and we are in the half carriage – a private room to ourselves! The journey is scheduled to take just under 11 hours and covers 685km (425m.) 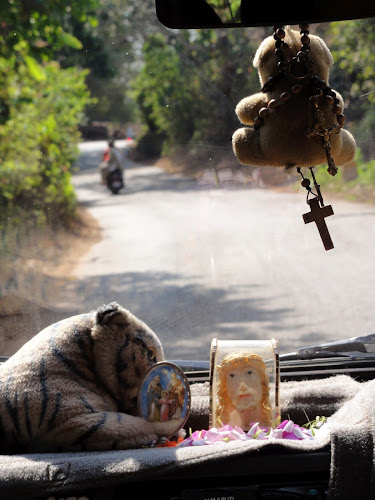 The journey started with a 40 minute taxi ride to Pernam railway station. It cost Rs300 (about £3.60) and we drove along the Goan side of the river which separates Goa from the neighbouring state of Marharastra. We had left plenty of time to catch the train so had a very cheap and mildly spicy breakfast at the quiet little train station. 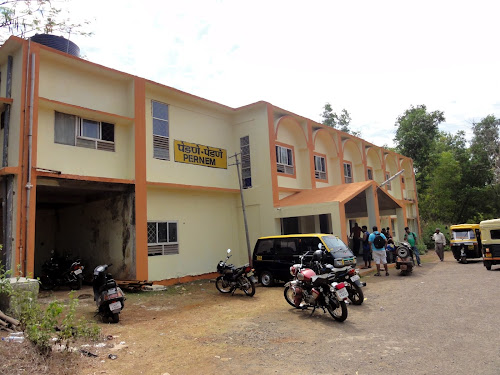 This first class compartment is very nice indeed. We are provided with clean sheets, a blanket, pillow and a bar of soap each. We have seats/beds, a power point for charging, a sink, a variety of different lighting options, air conditioning, a bin, a cupboard with hanging space and a fan. Not only do we get all that but also free food! Our lunch of choice was provided free of charge and delivered to our compartment by one of the many many catering staff on board. We may even get dinner too! 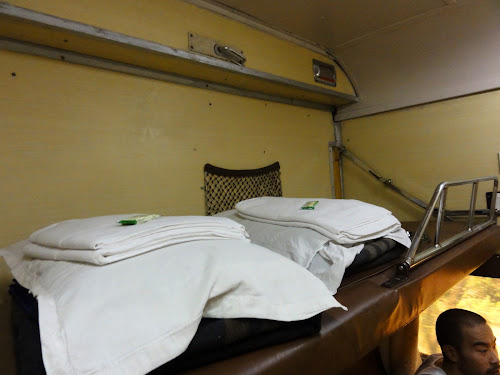 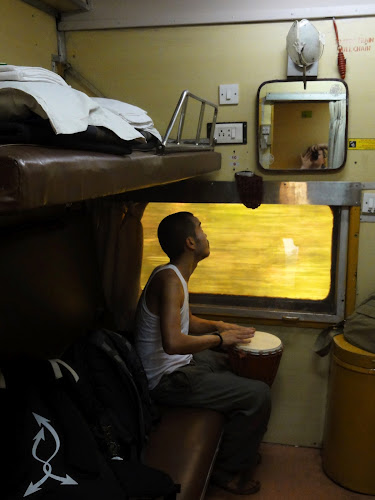 We’ve explored most of the train and the best part was the pantry car. We first came through when we got on at the wrong end of the train and they were more than happy to let us squeeze past their massive pots with our bags, Henry just had to give them a 30 second blast of drumming to please the manager no end. It was fascinating – a real ‘behind the scenes’ view of things (it is not an area usually open to the public, all the food is sold to the passengers in their seats.) We returned there just after lunch to take some snaps but they were not too keen – said it was “too dirty” to photograph. Although it did look a little chaotic, the stuff on the floor was all peelings and it looked like it got a good wipe down every night and not too bad for just feeding hundreds of people. I got a few pictures but the one thing they cannot capture is the heat. We both agree that it is the hottest place we have ever been to, it was as if we were walking through an actual oven. 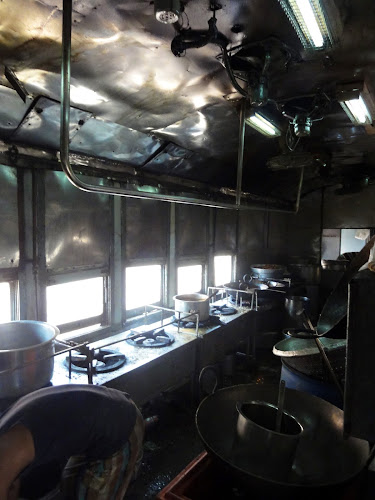 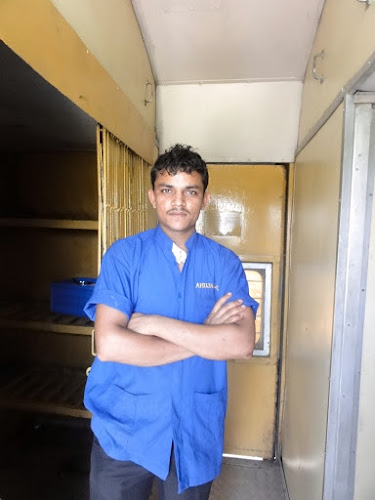 The food and drinks are carried up and down the train, seemingly non-stop, and there is a massive amount of choice on this particular train. The staff (all male) usually carry one thing each and call out their wares until they are flagged down. So far the choices on just this train have included: chai, coffee, water, milk, cool drinks, egg roll, chicken roll, veg patties, chicken lollipop (fried a bit like KFC), veg and chicken noodles, chicken manchurian, egg, veg or chicken fried rice, sandwiches, samosas, tomato soup, fruit salad, yogurt, various branded snacks and at least 3 other items we could not identify from the call (and did not catch a glimpse of because of our little compartment.) Henry always has a few coffees on the train as they are just how he likes it: moderately milky and very very sweet (it is pre mixed and after trying it several times I just stick to the water) They are also very affordable at just Rs6 each (0.7p!)

There are 2 toilets in our carriage, one Indian and one ‘western style’. It was the cleanest on any train we have been on and quite acceptable. 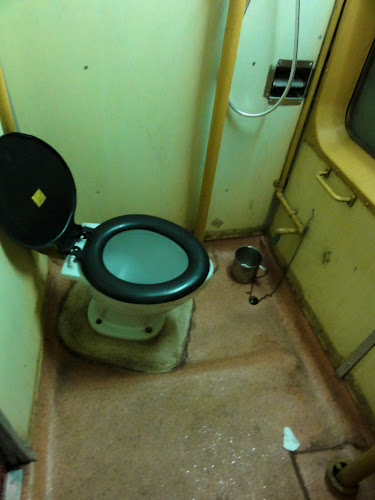 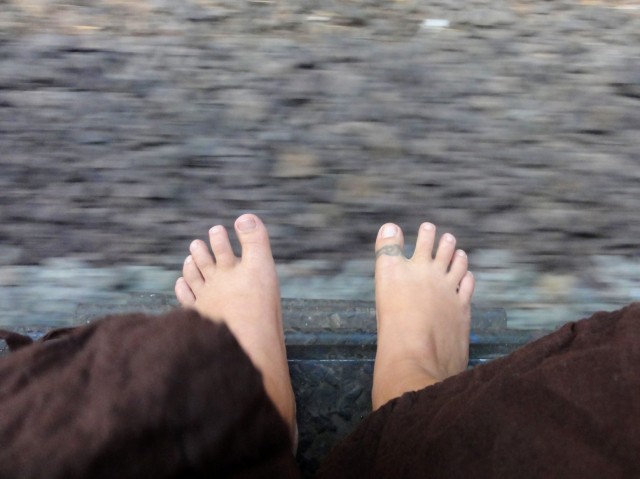 I’m now re-reading this post before I post it over a week later. The update is we did actually have to pay for some of the food in the end. At the end of the journey a man came with a bill but we could not work out if it was for lunch, dinner or both and the man could not explain it so we will never know.

The last hour or so of the trip was spent crawling through the outskirts of Mumbai at a very slow pace passing many temporary settlements of people living under tarpaulins and cooking outside. The litter along the tracks got worse and worse. (There is a lot of litter along all the train tracks in India, the standard thing to do is to throw everything out of the window.) The trail of mess was added to by the man who cleaned our compartment. We were waiting by the door, watching the city pass us by, and the bin we had been pleased to see and dutifully using the whole journey was emptied out of the door on the other side! There seems to be no sense of pride or ‘keep India tidy’ feeling among the people. In all of our journeys we only met one man who was unhappy with the way everything was thrown out of the window and he did not say anything to those who were doing it in the same carriage. It is a shame because most of the stuff is not biodegradable and it is spoiling some stunning countryside. 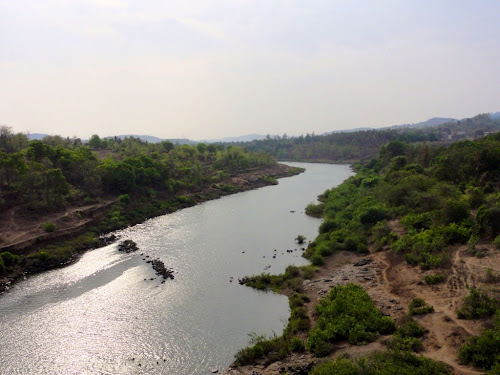 A quick note on the scenery. We had the option of doing this trip overnight but read that the scenery is so amazing that it is recommended to take the daytime train. We felt that although there were some nice views, we have seen better in Kerala and the night journey would have been fine (and saved the price of a night’s accommodation.) 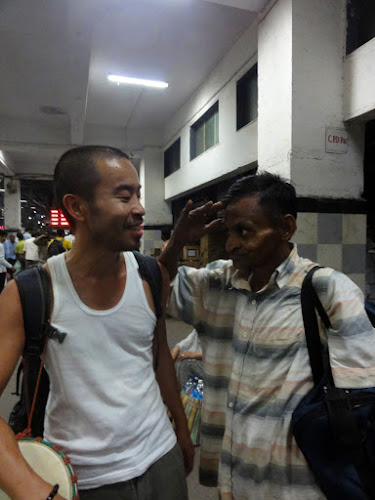 Mumbai CST is indeed a very busy station and even after 11pm (the train took over an hour longer than it should have done) it was still packed. We found the taxis and started to learn how different the accommodation is here from everywhere else we have been. We rejected 5 hotels before settling on one and finally getting to sleep at about 2.30am. (Reasons for rejection included cockroaches, the room being so small there was no space at all on 3 sides of a mini double bed, dirty sheets, water all over the floor, rude staff and others I can’t even remember as I was so tired.) It was a long day indeed and by the time we went to sleep we were not in love with Mumbai at all. Since then we have accepted that we have to pay a little more for a reasonable room and each day we have enjoyed the city more and more. Read all about it in the proper post about Mumbai, coming soon.