Whist in Da Nang we were approached by quite a few ‘Easy Rider’ motorbike drivers wanting to sell us tours. A lot of them live in the city so we were perfect targets for their sales pitches which included photo albums full of snaps, books full of hand written recommendations in a myriad of languages and sometimes a laptop whipped out of a bag or a Lonely Planet guide book to show us their testimonials. We resisted the $80+ a day each tours but began to realise that it might actually be a good way to travel to Hoi An, our next destination. 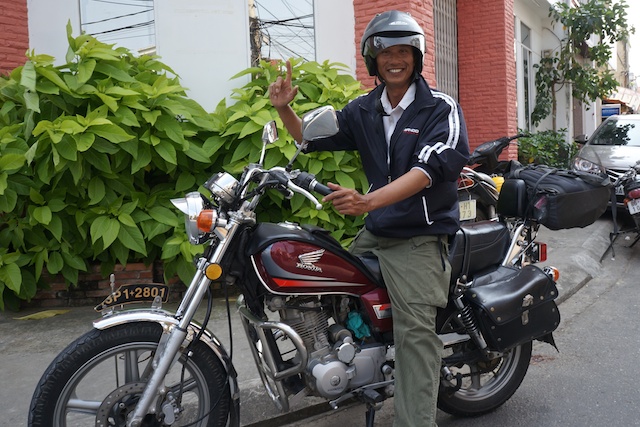 On the morning of our departure our riders, Chien and Vu, roared up outside the hotel on their larger-than-the-average-Vietnamese bikes and loaded our little bags on the back (“is this all of your things?”) We got our helmets on and we were off! The bikes certainly had more power than any we had been on before and yet they actually felt more safe. We had a bike each and we were protected from slipping off the back (a quite irrational fear of mine) by little seat backs. 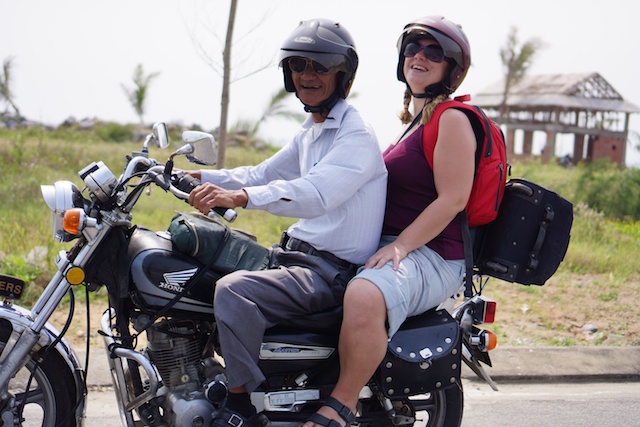 Our first stop was Monkey Mountain (Nui Son Tra) which we’d been able to see in the distance from the beach at Da Nang for the previous week. We headed north and soon got into the groove of being Easy Rider passengers. We had some steep hills to climb and I’m not sure lesser bikes would have made it with 2 people on. The views on the way up to the top were pretty good. 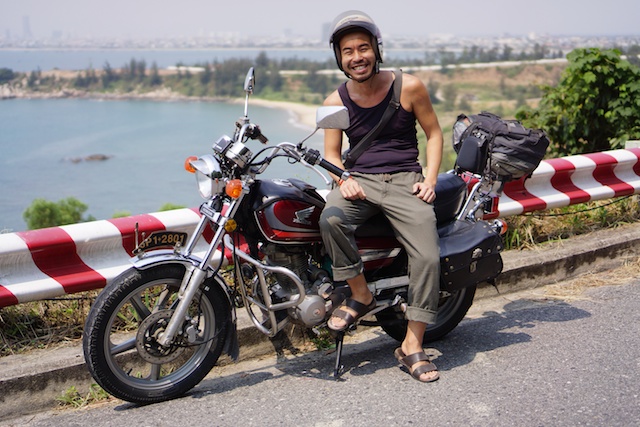 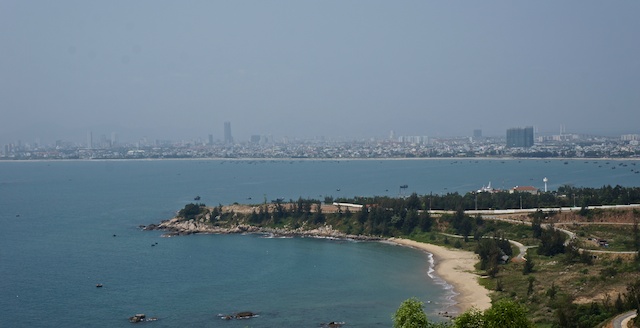 Looking back over the city of Da Nang from Monkey Mountain

During the war the whole of the mountain was an American radar and communications base and it was christened Monkey Mountain by the troops stationed there because of the rare type of monkey that inhabits the peninsula (unfortunately we did not see any.)   Now, the giant lady Buddha has been built amid a complex of temples and court yards and can be seen for miles around. 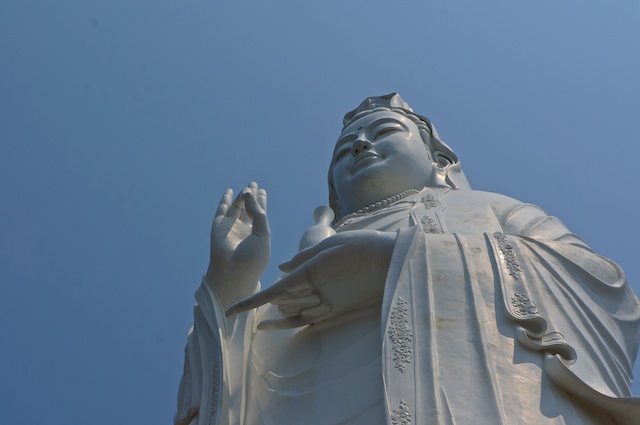 She is a representation of Guanyin, the Bodhisattva, and is considered the personification of compassion and kindness, a mother-goddess and patron of mothers and seamen. (All the locals just refer to her as “the Lady Buddha” though.) She is looking down to keep a watch on the people (especially the fishermen) as she sees and hears everything.  It was a pretty massive statue (67m) and most of the visitors seemed to be there to worship. 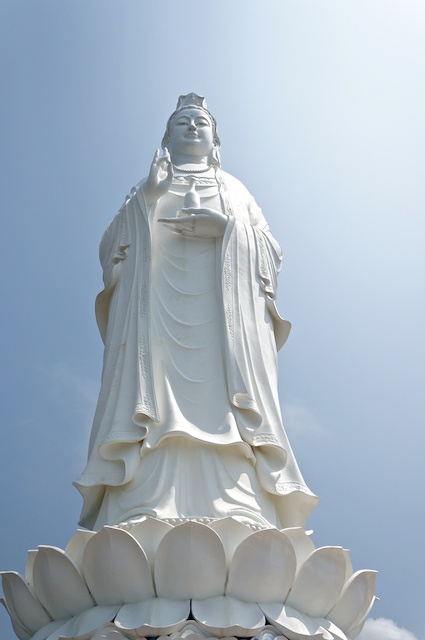 We had a good look around but it was a boiling hot day and the bikes were ready to air condition us so we sought out the drivers who were waiting patiently in the car park and headed south for our second stop. 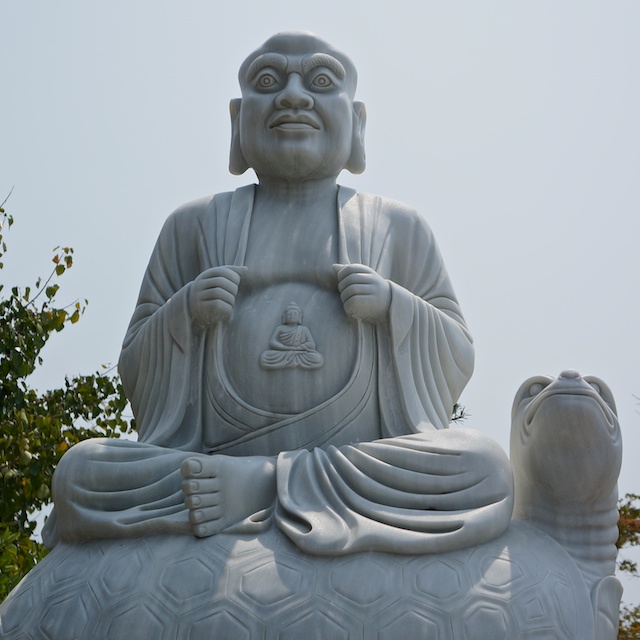 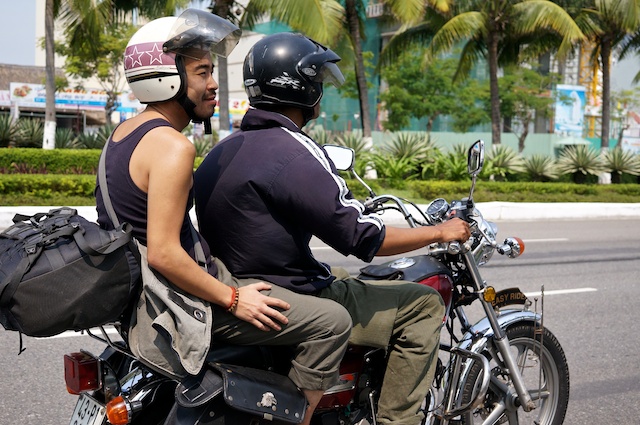 The Marble Mountains (Non Nuoc) are just 8km south of Da Nang so it did not take too much riding to get there. On the way we passed an old American airbase. Chien pointed out these large bunkers to me and told me they used to shelter helicopters. 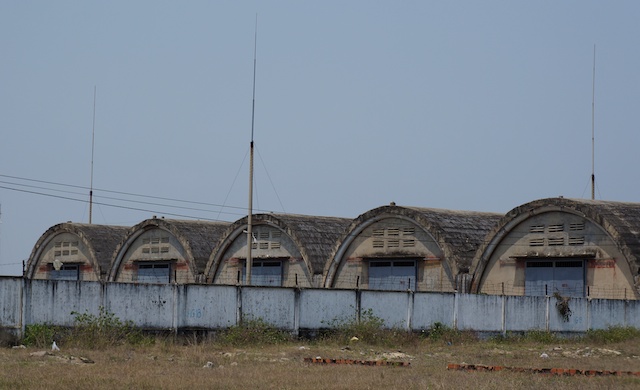 The Marble Mountains are actually just limestone and marble hills. They stick out of the flat landscape like giant warts. There are 5 ‘mountains’ named after the five elements; Kim (metal), Thuy (water), Moc (wood), Hoa (fire) and Tho (earth). They used to extract marble from here but that has recently been banned. We were dropped off at the bottom of Thuy mountain which is open for tourists to explore. We had to run the gauntlet a little to avoid the very keen sellers of marble souvenirs before we purchased our bargain (47p) entrance tickets and decided to forgo the ugly new lift that has been installed to help more infirm/unfit people up to the half way point and tackle the stairs. 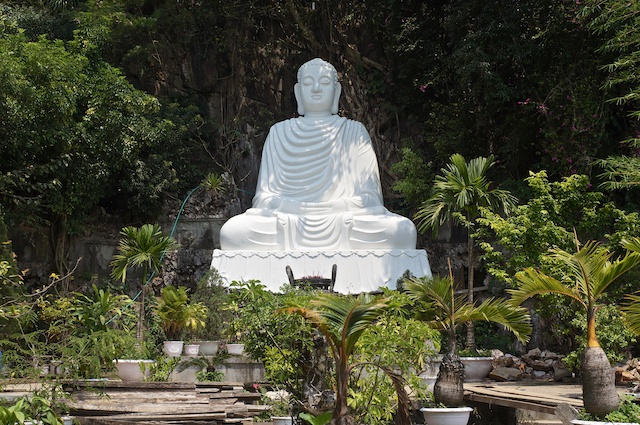 One of the first massive carved marble pieces, about 1/3 of the way up. 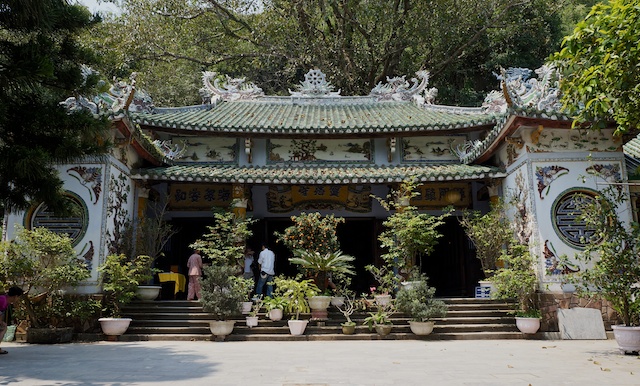 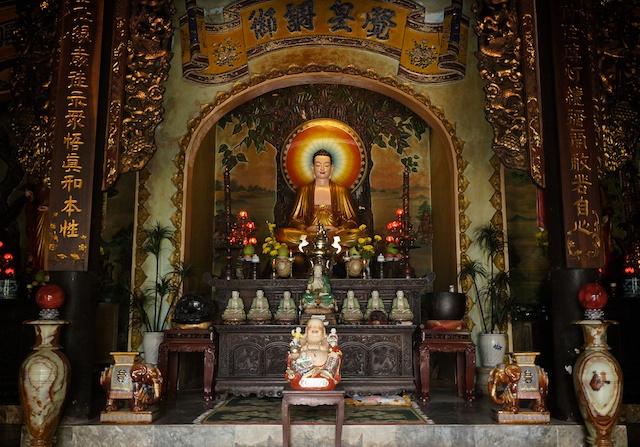 We spent a good couple of hours exploring the pagodas, caves, shrines, tombs and grottoes on our way up to the top.  It was a scorchingly hot day and each time we came across another cave we it was blissful to feel the coolness inside. 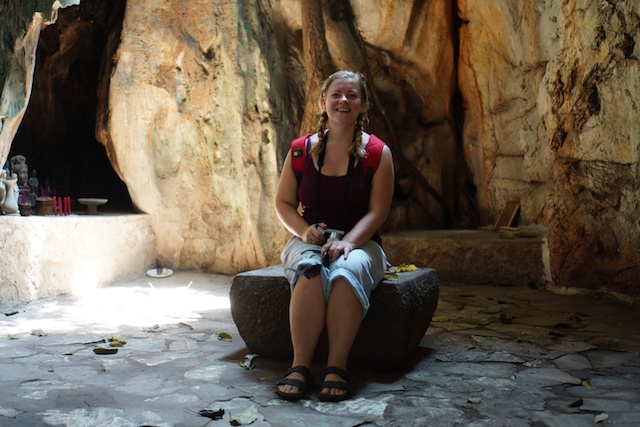 Having a rest in one of the the cool caves 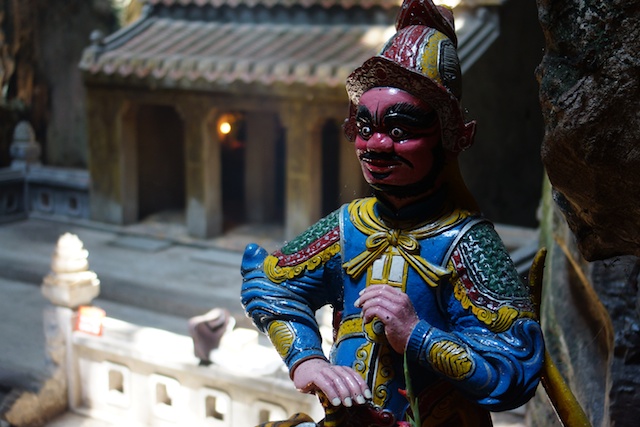 A guardian of one of the cave temples

The site has been a place of worship for Buddhists for hundreds of years and pagodas continue to be built today. There was really quite a variety of things to see.  Many of the large statues have been carved directly out of the rock and must have taken years to complete. 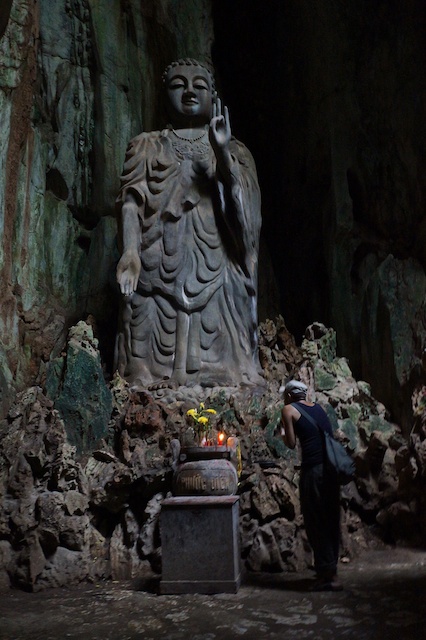 Each of the caves were filled with incense and some of the larger ones were open at the top, allowing dramatic shafts of light in through the moss covered openings. 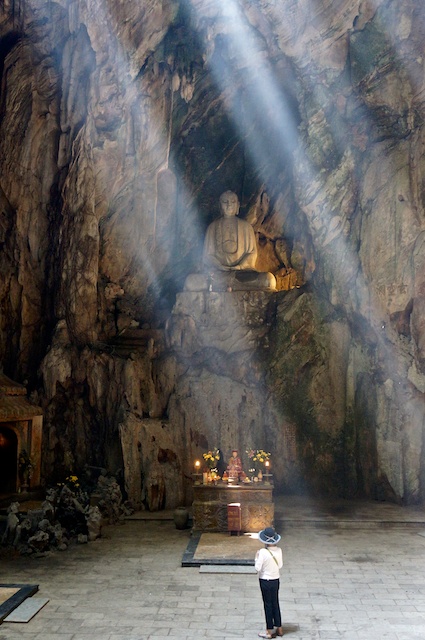 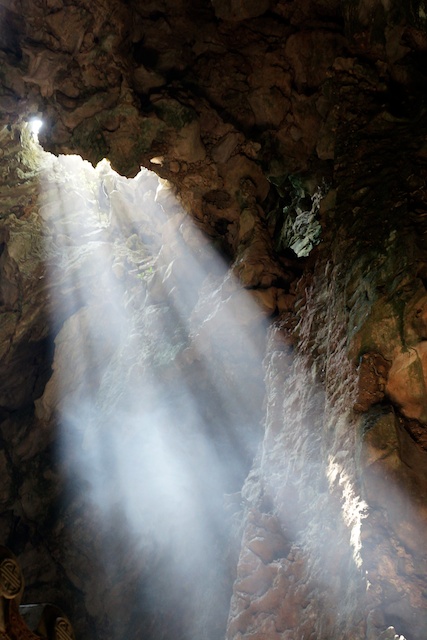 Eventually, we found a staircase that seemed to go to the summit.  It started out as an easy climb but about half way up the stairs disappeared and we were faced with massive marble boulders to clamber up that had been worn smooth by visitors over the years.  I was very glad I had worn my trousers that day as we turned into rock climbers to get to the top. 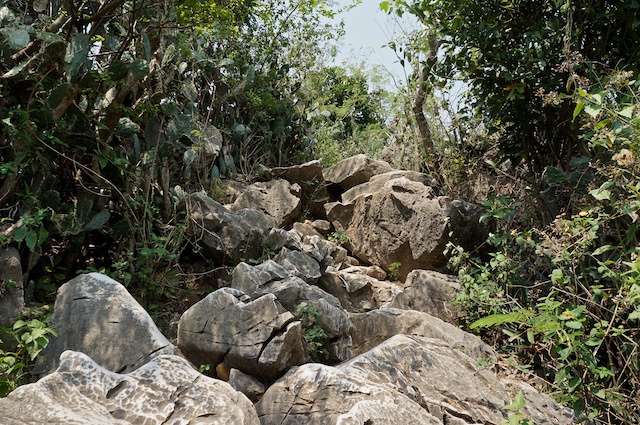 The view form the top was worth it though. We could see for miles in almost every direction. (I did attempt a photo of us at the top but we’re so hot and sweaty its not a picture anyone wants to see!)

Panoramic view of the other ‘mountains’

We took it easy on the way down (me on my bum for some of it) and stumbled across a few more little grottos on the way to the bottom. We met up with Vu and Chien again and had a coffee in a little family run place. They had a mentally disabled daughter. She was perhaps only a couple of years younger than us and was another dioxin victim. She was able to make herself clear though (in Vietnamese) that she thought Henry was very handsome and was the best husband for her out of all the men in the cafe! 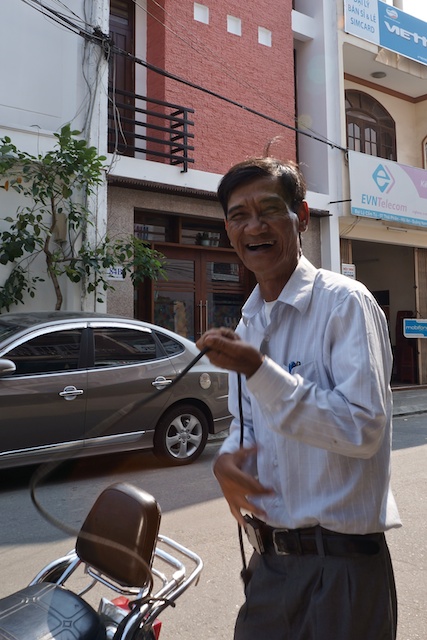 Mr Chien joking with us once we reached Hoi An

After our coffee we jumped back on the bikes and headed to our next destination: Hoi An. The Easy Rider tour was a great way to travel and we would highly recommend it to anyone thinking of arranging one. My Easy Rider was Mr Chien. His website is easyridersdanang.com and Henry rode with Vu. These are their cards in case you’d like to book an Easy Rider trip of your own. 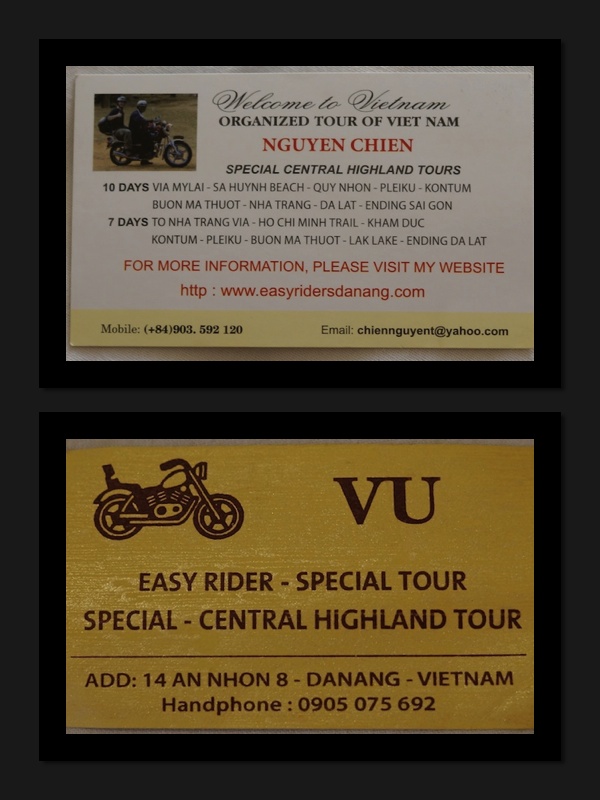