After the visit to the Killing Fields we settled down to spend 9 days in the capital city. We moved away from the Riverside area which is where many of the tourist hotels, guesthouses and restaurants are and into the Sorya area. A little further north, Sorya has Cambodia’s first ever shopping mall (built in 2002) and our new guesthouse was just down the road. We were also close to the covered New Market, a grand art deco creation selling almost anything you can think of. 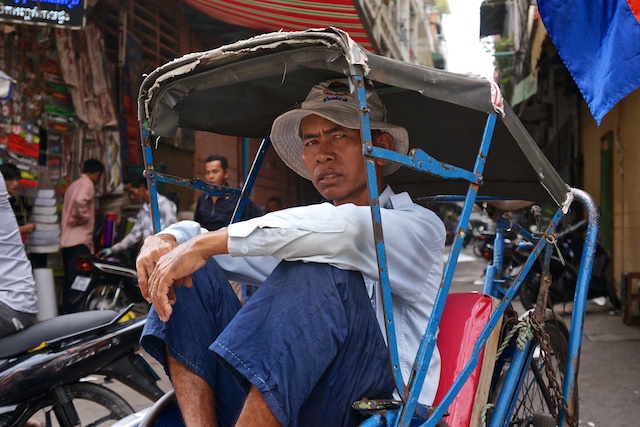 A tricycle rickshaw driver having a rest. 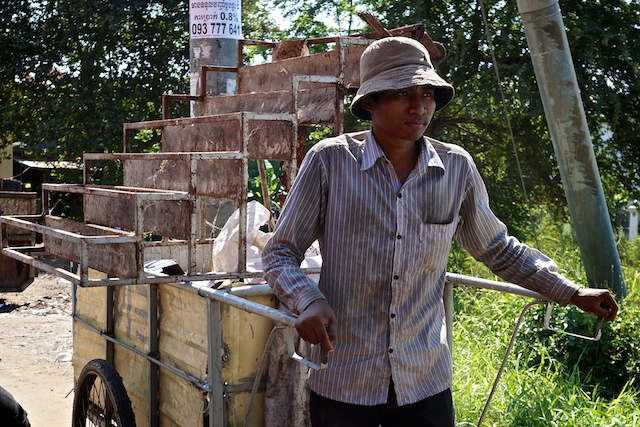 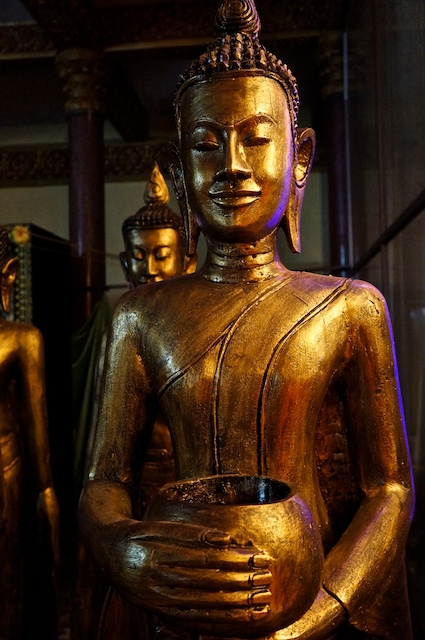 Inside a pagoda near the palace

I think we were expecting to feel uneasy in Phnom Penh. Before leaving KL, while I was reading about the atrocities committed by the Khmer Rouge and the historical French rule, Henry had been focussed on more practical matters like money, and primarily safety. His research did not paint a rosy picture. Reports of muggings and attacks on tourists, especially after dark left us with a portentous feeling that we would not feel comfortable to roam the city with our cameras in hand as usual. We really needn’t have worried. We’ve read those warnings about every country and none of places have ended up giving us an actual uneasy feeling except the Philippines. Phnom Penh is remarkably relaxed for a capital city and perhaps one of the few left in the world without many tall buildings at all. We felt safe walking around the city by day. Most people had a smile or a wave, kids would wave and call “Hello”, and quite a few people agreed to have their photo taken. 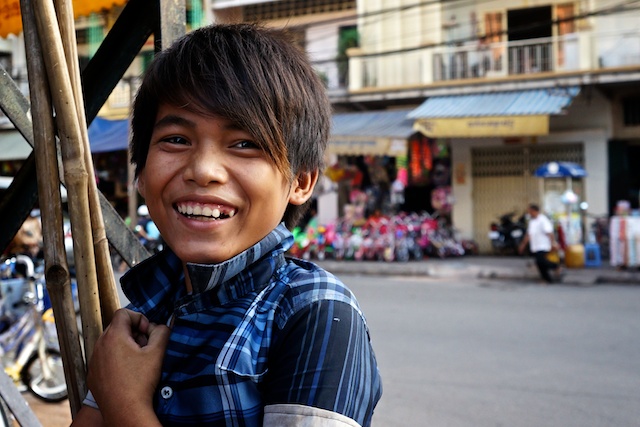 Perhaps the streets did become more dangerous at night but we were not out much late in the evening. Once we were outside of the tourist area of Riverside a lot of places tended to close down at about 7 or 8 at the latest (often opening before sunrise at 6am ish.) We ate early, went to bed early and got up early to fit in with the swing of things. 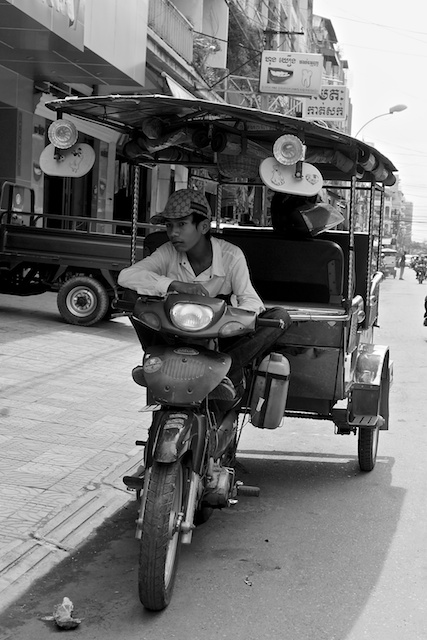 The youngest tuk-tuk driver in the world?

We checked out a lot of the city on foot and took in some of the tourist attractions. The markets were probably the most vibrant places we visited. All of the markets we visited had at least some of their stalls dedicated to selling souvenirs and gems to tourists but they were often mixed with “wet market” products like fruit, veg, meat and fish as well as household items, clothes, shoes and electronics. 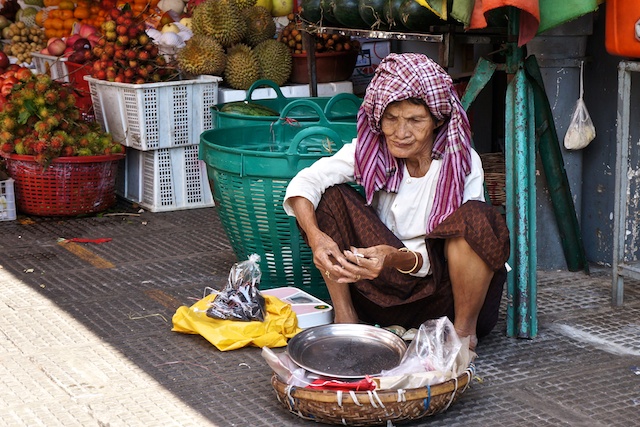 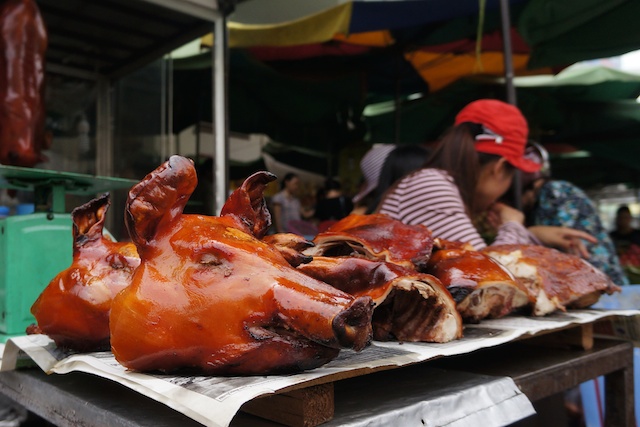 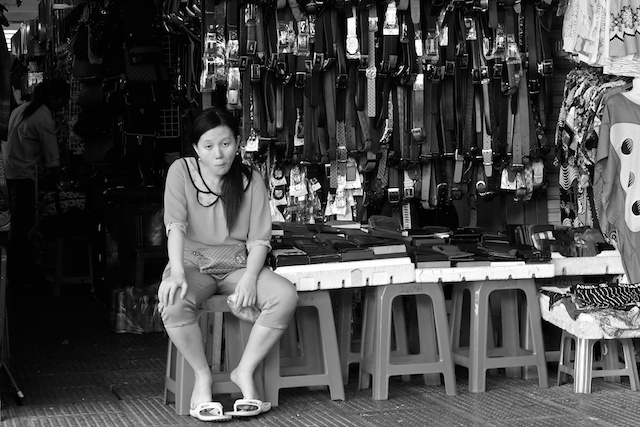 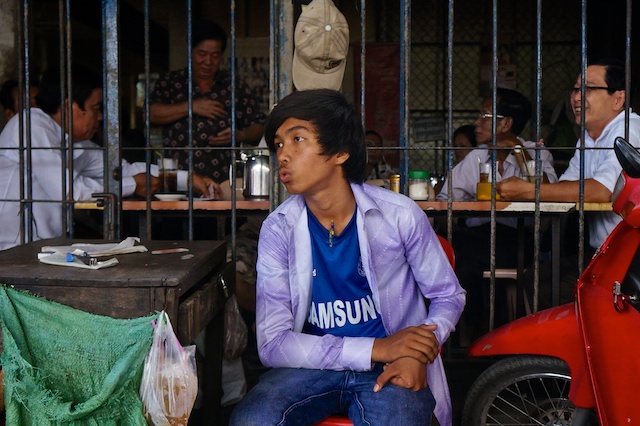 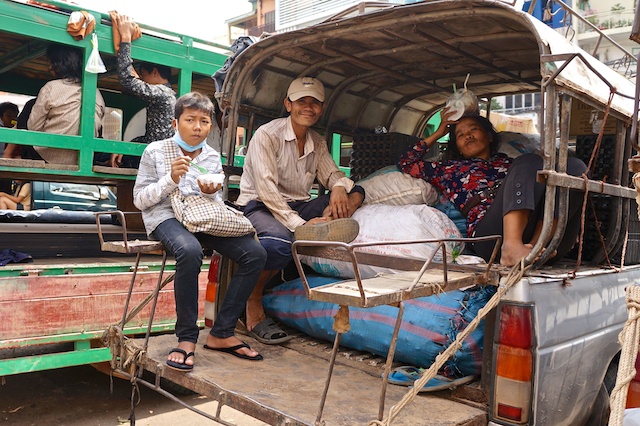 Our visit to the capital coincided with one of the largest festivals of the year – the Water Festival. It is a 3 day festival celebrated throughout the country but centred around Phnom Penh. Unfortunately, all official celebrations were canceled this year due to the death of the former King. He died in October but a three month mourning period clashed with the festival so the boat races, parades and fireworks were all off. 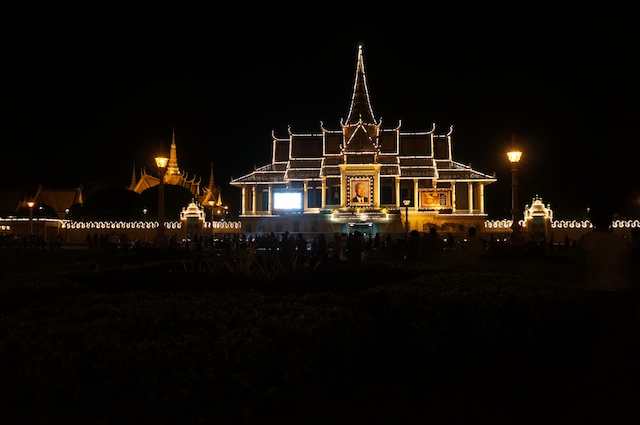 The Royal Palace at night

We had a look at the Royal Palace a few times from the outside but we did not pay the entry fee to go inside.  Because of the former King’s death a lot of what you pay to see is off limits at the moment.  We saw the place from the same spot as the locals. 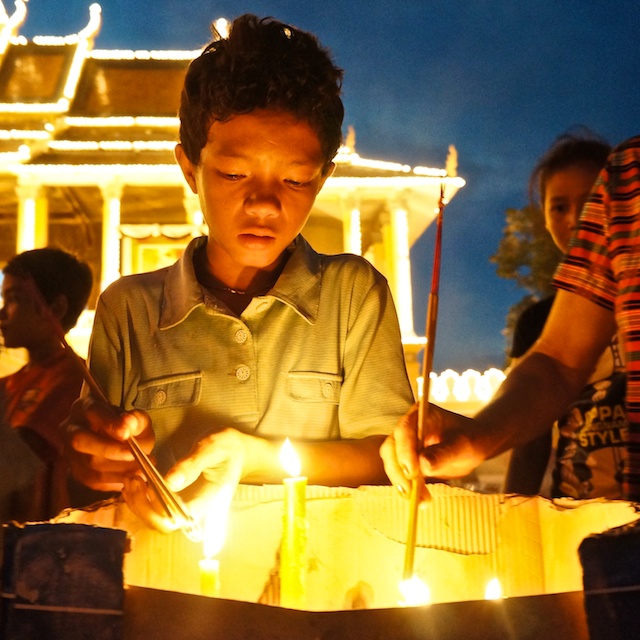 There was a giant video screen attached to the front of the palace beaming what seemed to be a live stream from the room where the golden coffin was lying in state.  Outside the Palace gates was a permeant team of mobile food sellers as well as adult and child sellers of lotus flowers and incense: “for blessings”. Henry somehow agreed to buy some incense and it was lit by the children who tended candles for that very job. There was a steady stream of local customers and, a little away from the large mat that had been placed for people to use for prayer, it seemed like the festival atmosphere was in evidence at times. Lots of families picnicked on the grass and children ran around chasing the pigeons. 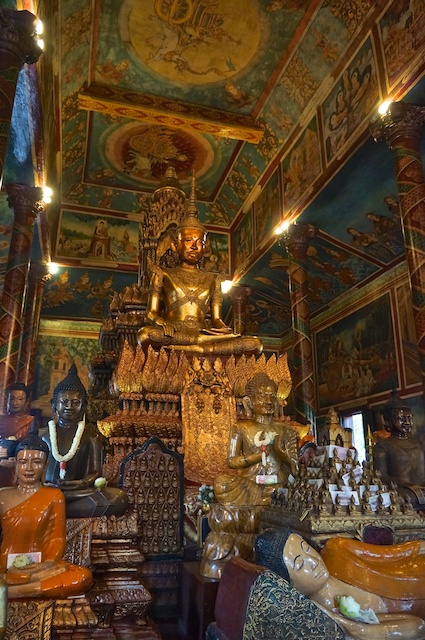 Inside the temple at Wat Phnom

At the end of our week in Phnom Penh I decided to take a quick solo trip to one of the sights we had not managed to see yet. Wat Phnom is a temple on a hill and marks the point where the city was founded, according to legend. 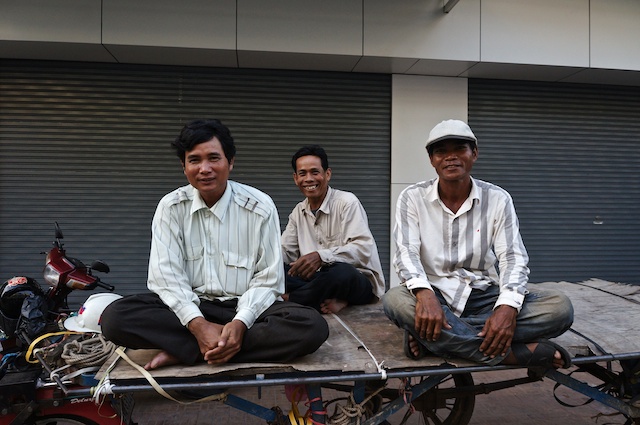 It was a nice little visit. Travelling each way by hard-haggled tuk tuk, I was only gone a few hours but I caught the afternoon light and was back before dark. 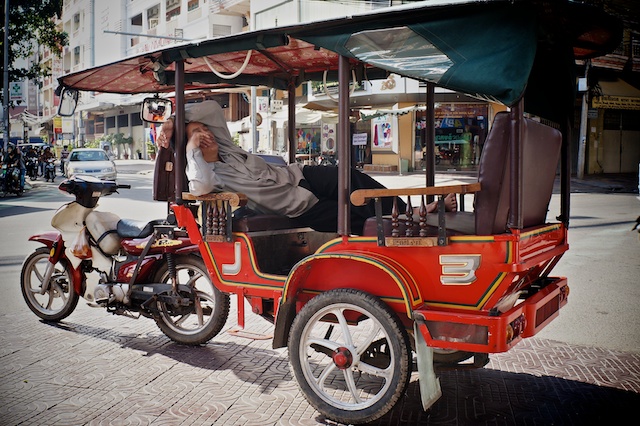 All in all we really liked Phnom Penh. It is quite relaxed for a capital city. The prices are good compared to Kuala Lumpur: everything, especially accommodation, is much cheaper. We stayed in two guesthouses in Phnom Penh and the second one was as good as a hotel. We had a wrap around balcony with our standard room with fluffy towels, room service, fridge, air con, TV, wifi and a hot shower all for an excellent price. 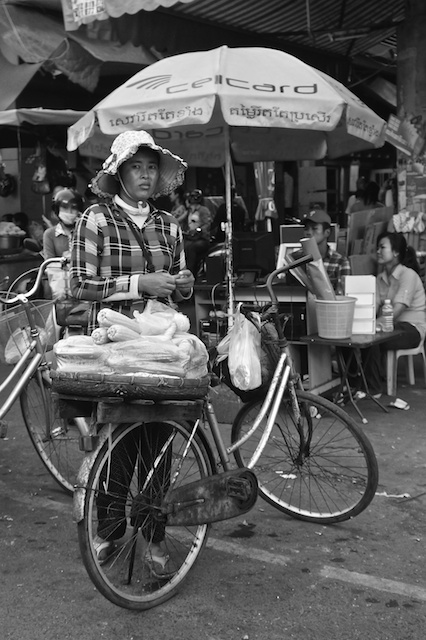 The traffic is busy but relatively slow moving.  It is, once again, not a place for the faint hearted to go and try crossing the road. We are pretty good at just walking into oncoming traffic now though. Secretly, we enjoy watching other, less experience foreigners standing looking confused, frustrated or just scared at the roadside. 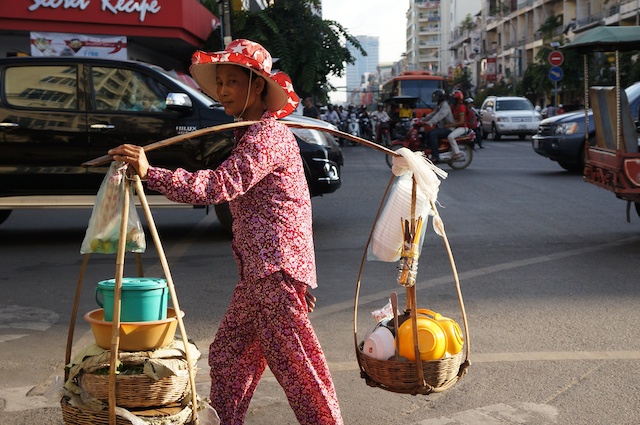 The traffic is dominated by motorbikes, motor bike taxis (motos), bicycles and tuk-tuks (both passenger and sort of truck tuk-tuks, hooked  up to a motorbike) sprinkled with a few hand drawn carts.  There are not that many cars or buses so there is not much pollution. It is not uncommon to see 4 or 5 people on one motorbike. We have also seen just about anything you can think of being transported on one, including fridges and people on IV drips. 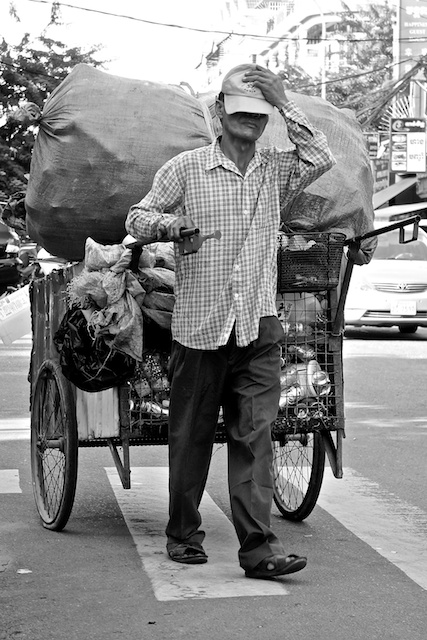 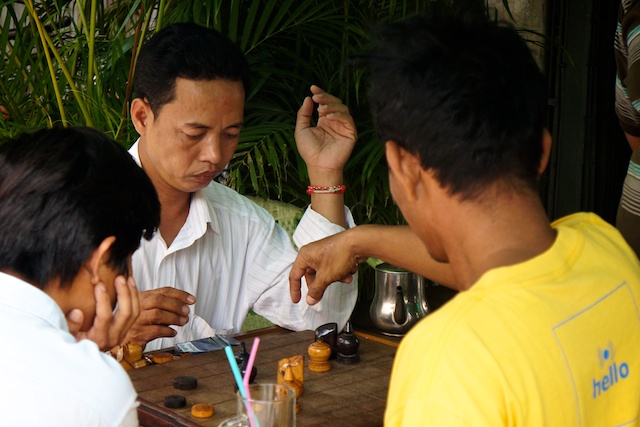 This was a popular game on the street. Most games had an audience. 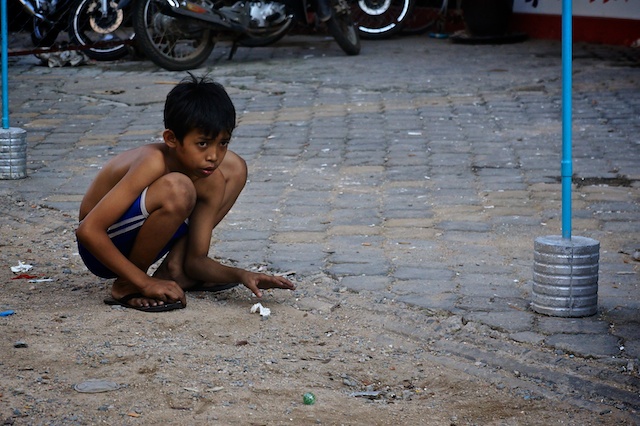 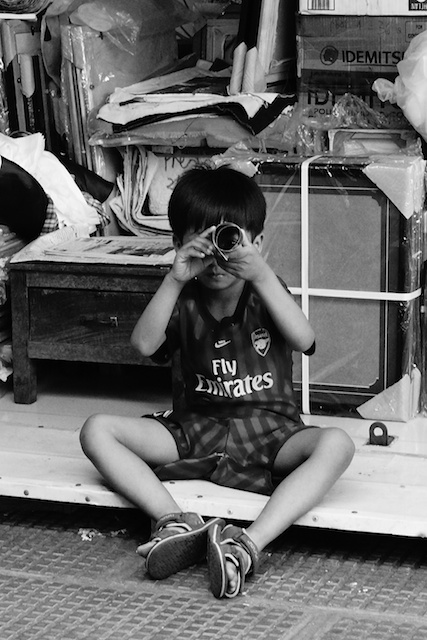